I made the flight to Milan from Zurich and the rest of the family and friends achieved the same result from Gatwick.  Behind that simple statement lies a lot of worry and organisation but we made it, picked up the nine seater van (I am a white van driver for the week with all that might imply) and headed down the A8 to Tuscany.  The only thing which went wrong was the absence of an audio socket, so my downloading of the Radio 4 version of His Dark Materials was wasted and we were limited to Italian Radio.  It's a long and uninteresting drive until you turn off for the E45 and head over badly maintained roads in the general direction of Rome.  By the early evening we were in Sansepolcro stocking up with food for the weekend, although half the bill was for alcohol.  The Sat Nav for some reason was refusing to recognise Italy as a country so we were back to maps and driver navigator arguments which has a nostalgic air to it. 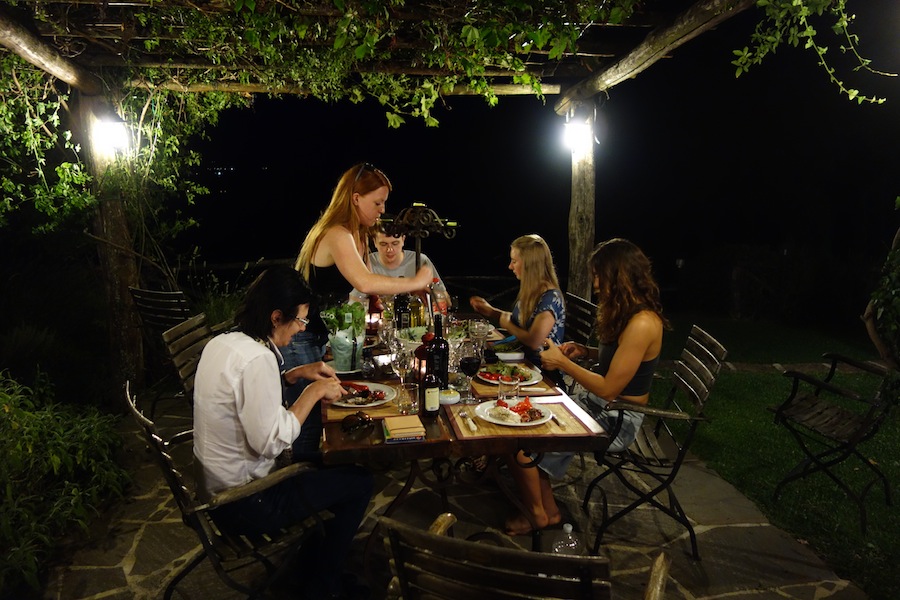 The final few kilometres were the most interesting, up gravel tracks with no passing space and a final steep section.  A bit hairy at times in a large van but we made it, although one bottle of with gas water went bouncing down the hill exploding at the half way point.   The location is incredible.  I bid for it at an alcohol fuelled charity auction in the Hong Kong 7's last year and of the all too many drunken decisions of my life this was one of the best.  A wonderful stone built farmhouse now fully equipped but with all the original features.  A generous welcome pack, five great rooms and a view to die for.  More photos here for those interested from the first evening, those of people are private though.  I will share this one photo of all bar myself settling down to eat outside; from the left clockwise, my wife Sheila, Amy (friend of Eleanor), Huw, Becky (Girl friend of Huw) & Eleanor.

The internet works and I can't be fully on holiday as we have one very important project starting that will need daily calls.  But I will do my best to take the time off.  The idea is trips to Assisi, Florence and Sienna plus walking, cycling and kayaking so it will be a packed week.

One thing I have done is to bring pristine copies of two of my favourite books by two of my favourite philosophers.  That is to say  Wikedness from Mary Midgely and Dynamics in Action by Juarrero.  I have well worn, much marked up copies of both at home but have decided to read them again from scratch and make the notes anew.

Zurich for the LAS event

An evening arrival into Zurich followed by a short train ride and walk took me ...

Today was a rest and relaxation day here in Tuscany.  I went for a swim ...