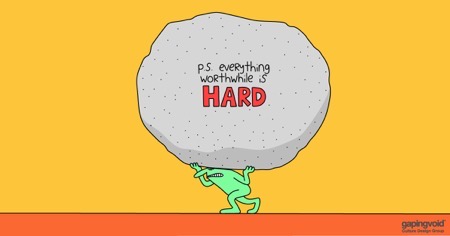 So I’ve now flagged up religion and narrative as distinct aspects of human systems, and note they are both collective in nature something that with the overall function of reducing energy costs will be a theme throughout this series.  Humans like most animals to varying degrees operate best in groups, social interaction is a part and parcel of what we are, Adapting John Donne’s Meditation XVII to a modern age  “No (wo)man is an Iland, intire of itselfe”.

One of the things I flagged up in yesterday’s post on narrative is its role in transferring knowledge and learning across the generations.  Narrative contains knowledge at a level of requisite ambiguity that it can adapt more readily than hard, codified written material.  A good story dances on the edge of our understanding to entice us to further learning.  Most religions teach through stories as well, the use of paradox and ambiguity is key to the validity of messages over time.

One of my rules of knowledge management, extending Polanyi is We always know more than we can say and we will always say more than we can write down.  I then expand that with the taxi driver and map illustration.  The Map is codified, if you understand the symbols then navigation is easy with minimal training and experience.  The London taxi driver on the other hand goes through a two-plus year process of learning as a part of a community and the nature of their knowledge is very different.  Narrative acts as a halfway house between the two.  In effect the process by which London taxi drivers acquire The Knowledge is a modern form of the ancient practice of apprenticeship; institutionalised, ritualised, social processes by which knowledge is transferred, generated and retained within human communities and more generally in society.

I’ve written on this several times and in 2010/11 (it should really have been a Christmas series) I  wrote a four-part series on the ageing workforce (links below).   I also used an identical title for a five-part series in 2016 with different materials.  I just spent a bit of time with the help of Grammarly proofreading and getting the categories right so you can scroll through them without too much difficulty or offence; I’m more than aware that my dyslexia means I don’t notice some very basic errors and that makes it difficult to read for many.  There is a lot of material in both series, although the first is a little dated given some of the changes in machine learning over the last decade.  Material from the second is hereby incorporated into the post in its entirety, the first is more patchy but the fourth post contained some key aspects of the way the apprentice model worked and I’m going to replicate that here (with some amendments).  I really need another name than master by the way but I can’t think of one so take it as gender-neutral for the moment,

Some of the essential features of an apprenticeship model:

Now compare that with modern management development. A business degree is followed by an MBA and a stint in a major consulting firm. Throughout this period the emphasis is on the explicit, abstracted cases, or reproducing and reusing. Then with no practical experience, the consultant takes a senior management position. All they can do is manage by numbers to the detriment not only of their employer but of society as a whole. It is even worse in the Agile community with its scary belief in certification schemes.  They haven’t learnt to the lesson of the opening Gaping Void illustration …

I’ve run through the medieval model as it’s the most complete but that is not a recipe.  I remember being an expert witness when London was thinking of getting rid of the knowledge in favour of sat navs (this is before the Uber Age) and I pointed out that the socialisation of the acquisition of knowledge bound people into an ethical and professional standard, something that takes time and social processes.  I’ve also used the example of Matrons in British Hospitals, another prior post which is fully incorporated into this one.

Now you can agree and disagree with this in whole or in part, the individual examples may or may not work for you but the point is that a uniquely human capacity is the creation of ritualised social practices to pass and develop knowledge between generations.  So it is my third characteristic.

Artist: Hieronymus Bosch  Netherlands, 1475-1480
This banner picture is cropped from the original

As a general theme for the Twelvetide series this year I am using Renaissance artists, ideally with a journey theme for the banner picture which may or may not relate to the ideas in the post. Then a Gaping Void image to open the text and make a point. Sometimes I will spell that out, sometimes I’ll leave it hanging.

The importance of narrative in understanding human systems has been a large part of my ...

I spent most of yesterday’s post using the apprentice/craft hall set of practices to illustrate ...