This time last year I was en route from a holiday cottage to the small village of Croesor to do the circular walk of Cnicht and Moelwyn Mawr.  The short winter day meant that I couldn’t add Moelwyn Bach to the circuit.   It was one of those magical days were every appears dire when you set off but then the rain holds off. and the sun comes and goes with the winter light creating some magnificent photographic opportunities and I think, with a couple of exceptions, I scored a could do better to be honest.  I was looking forward to three more days and had a great time.   In contrast, this year, given I am banned from driving for an as yet undetermined as part of the recovery from trepanning I will shortly set off on a circuit of the Marlborough downs in overcast weather.  The other thing about this time last year is that I was going straight on from Snowdonia to a holiday let in south west Wales.   The family had booked it as a surprise sentimental weekend break for my 65th birthday.  It was a great idea and one of the best presents I have ever had.  We visited two places associated with Dylan Thomas which I had passed through on my Round and Through Wales walk which I  had finished on my birthday the previous year: sixty-seven days over four years.  Those places were Aberporth and Laugharne both worth seeking out for the views, walks, historical interest and restaurants. But the main sentimental visit was to Porthselau and the surrounding coast along with Treleddyn farm.  For several years until it was abruptly terminated (something I still find difficult to understand and have never really accepted) we had a family gathering in Pembroke comprising my wife, children, sister, and parents.  In many ways, we were re-creating our childhood experiences in Porth Colman which I recounted in the second post in this series.  The first year was somewhere near Cardigan as I remember but then in year two, we settled into a holiday let on Treleddyn farm pictured top left.  These days the whole place is a holiday let but then it was a working farm and we filled the milk jug direct from the tank every morning. 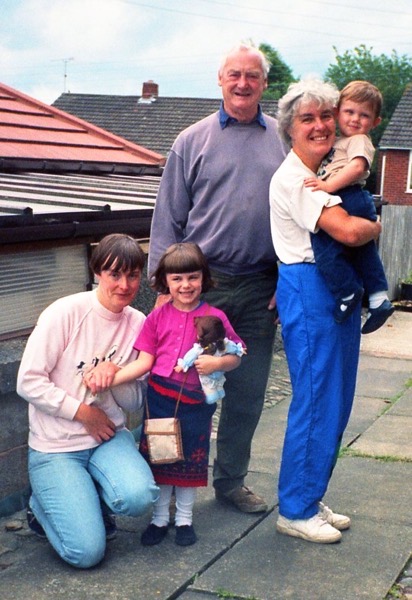 We went out and about but most days we walked down the track to the beach at Porthselau (banner picture) with good swimming but also rock pools to explore and coastal paths in either direction.   One day walking down that path, Eleanor and I who first down came across a small procession of newly hatched adders (as poisonous as the adults) crossing the path and there were always birds of prey in the area.  The beach was perfect for young children and they could play to their heart’s content and their Nain,  Granddad and Aunt pictured to the right, who could take on most of the childcare duties!  We could sit around and read, or one terrible year catch up on a year of expenses!  The beach bar-b-que, always as a family tradition involving sausages as you would expect and you can see it in progress below. Mobile the reception was poor and I could just get through by standing on the stone wall by the gatepost in the picture.  There was no internet, in the evenings we could talk.  The coastal path to the east went to St Justinians with its lifeboat station which has now been replaced but the old one retained as a monument to many years of bravery by the volunteers who crewed them.  Just inland was the cathedral city of St David’s worth a visit in its own right and there were also nearby special places such as Solva.   I used to take the bike and disappear on longer half-day trips from time to time and the whole journey down, spotting landmarks was an event in itself.

The big event every year was the walk down to Whitesands Bay to catch the (family name) bouncy boat for the trip around Ramsey Island. We always tried to time the trip for an evening on a spring tide.   The boat’s first stop was The Bitches; a line of rocks through which the Irish Sea is funneled at high water creating a near waterfall.  Bouncing back and forth over that, avoiding the sea kayaks was often the highlight of the trip.   The boat would then go on round the Island racing through arches and stopping to see grey seal pups hauled up on the isolated beaches along with many sea colonies.   The reason we chose the evening is that the boat would move north of the Island and cut engines and we would wait for the Manx Sheerwaters to sweep in over the sea,  magnificent in flight they are clumsy on the land so they wait to the last moment of daylight to fly in so as to avoid predation.  They fly low so the air pressure prevents their plummeting into the sea, something that was copied by fighter pilots in WWII.  The holiday was a ritual and there were many rituals within the week all of which create an identity that should not be disrupted or disturbed.

I’d returned twice before the sentimental trip.  In 2012 I instituted my New Years Day walk and booked hotel in Swansea but it was pouring with rain so instead of the hills as planned (and remember I was still very overweight but returning to low land walking thanks to Peter and Julia) I drove down and parked at Porth Clais and walked around the coast to Whitesands Bay before retiring via the all to familiar track to the farm before returning to the car.  The lifeboat was out practicing in stormy seas as you can see from the link.  A much fitter me, some 45 kg lighter, started from the same point in September 2015 as part of my Round and Through Wales walk but carried to Porthgain where I had left the car earlier in the day.   The coast there is well served by buses during the summer.  Aside from looking over to Ramsey, dawdling in Porthselau and lunch in the case at Whitesands, I completed the full round of St David’s Head and that next section of coast is hard but rewarding walking.   I also had a great meal with Andy Middleton who was faculty at our last retreat and who demolished the old hotel to build a great house overlooking the Bay.   You get friends all over the world in my sort of job and it is one of the good things about travel.

Friends aside those family bonds creating by playing together are key to identity and resilience as you grow older.  I owe my family a lot for that, I always knew they would be there for me which made both my parents dying within ten days of each other just short of my 60th birthday difficult to bear.   But while I remember them at their retirement home on Moelfre and our family homes in Mold some of my most powerful memories are of those stays in Treleddyn as there we had three generations together.  Our strength comes from our families and our friends but the start is family. In the modern world, it is too easy to drift apart so making sure you come together on a regular basis other than the deadly threesome of birth, marriage, and death is very important.

Opera has been a part of my life from an early age and I was ...

There was little doubt that the Arm’s Park would be on this list.  The shrine ...