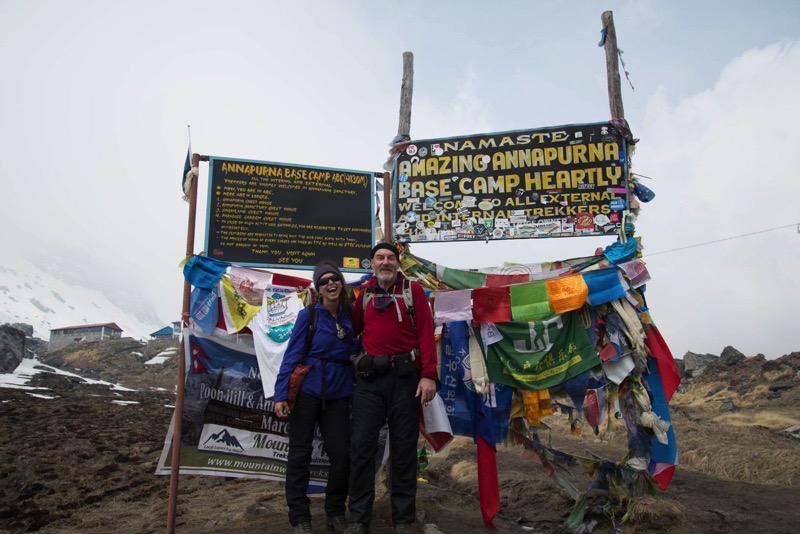 In this penultimate blog in the series, I’ve picked something to represent my journey back to health relayed in a series of posts over the last six years.  2013 was the big year and my first blog post in which I came out on having diabetes explains some of the feelings I had at the time.  That post was also a record of a walk with my daughter Eleanor as well as a reflection on suicide and various other things.  I’d just started an extreme diet but wondered if I had reformed too late; but by December of that year, I was able to report reversal and also the fact that I was back walking the hills and also cycling again.  That progressed with the Round and Through Wales walk which will be a part of tomorrow’s concluding post and a general realisation that I felt fitter at sixty than I had at forty.  Now from time to time my daughter and I had talked about doing a Himalayan trek and it general it seemed like a pipe dream.  Then one day we sat down in my study and just made a booking for the only available slot on days we could both make.  Ellie was also in India before for a holiday.  It is all very well to return to the Welsh hills but ten-day trek to over 4,000 meters is a more serious endeavour.

As it is we had nothing to fear, from the moment Ellie found me in Delhi airport to my leaving her in Katmandu everything went well.  I also made a radical decision to cut off all access to the internet for the whole period of the trek.   We had good companions so that was one risk overcome when you have to share cramped dormitories in tea houses personal tensions can build too quickly.  The walking was good and despite being one of the two oldest I was never left behind, indeed on the first day I managed a thousand feet more or less straight up without any issue.  The Sherpas and porters were not only highly competent they also became good friends and my status as an elderly professor secured me a few nights in semi-privacy.  I have all my notes still of that trip and they form a chapter of a book I have in draft called Walking through Diabetes that I plan to work on as soon as the main Cynefin book is out.  I add to the draft most months as something comes to mind.  The key moment for me was the approach to Machhapuchhre Base Camp which is where the altitude starts to hit.  Up to then, we had experienced what was joking called ‘Himalayan Flat’ which means multiple precipitous ups and down sections as you cross valleys and it was tough but doable and I was revealing in my new-found fitness.  But the final mile to Machhapuchhre Base Camp had us slowly putting one foot in front of the other in the manner you see in films of mountaineers on Everest.   We got there early to have half a day of acclimatisation before heading up to Annapurna Base Camp the next day.

I fell in love with Machhapuchhre, unclimbed and magnificent and never more so that when poping out to the less than salubrious toilet at 0200 I saw its peak magnificent in moonlight and woke everyone (no one complained) to witness what was a transcendental moment.  it was a special moment when I realised what I had always known that I belong to the mountains.   On the trek, the farming practices and attitudes of the people were so reminiscent of North Wales (although we don’t slaughter pigs on tarpaulins by the side of the path).  On the 27th March, we reached the Annapurna Base Camp (picture above) and celebrated.   That night the snow came in and we thought the next day would be a disappointment but the sun came out and we had the best day of the whole trek on the descent to Sinuwa with fresh sun and snow.  The top picture is of the Machhapuchhre range from that descent.  After the return to Katmandu, we celebrated my birthday by not finding a tiger in a game reserve and I had to dance with local villagers.  The picture does exist but I am not sharing it!

The first nine posts in this series have been largely personal although I started to ...

I spent a lot of time thinking about the last post in this series and ...