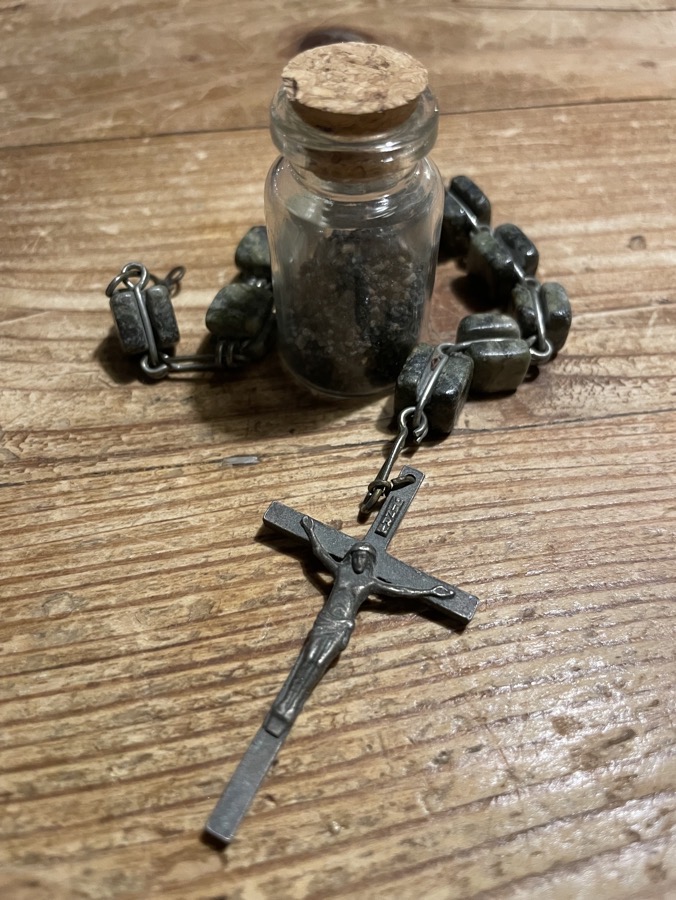 There is some debate in the literature as to the difference between repetitive actions and ritual acts, the argument being that the latter will also contain some symbolic aspect, in the object or what the object means.  In a sense this brings us back to an older difference between the sacred and the profane, words that originate as to what was within and without a Roman temple.  I tend to the view that they form more of a spectrum.  All ritual involves repetition, but while a;; repetition is habitual it doesn’t follow that habits are per se rituals.  Now while it is a spectrum the differences are I think important in the work we doing.  The presence of some symbolic element is significant and will impact on management.

The picture to the left has two objects, both of which are imbued with symbolic meaning and associated actions.  One is a rosary, made of Connemara Marble it has significance in its own right and saying the rosary is a ritual involving considerable repetition.  Its meaning is multi-threaded within the Catholic tradition, but it has additional significance for me given the context of its acquisition, a story that involves feminist theologians, my role as a chef and far too many late night conversations fuelled by Irish Whiskey in front of a peat fire with a storm rattling the shutters of a cottage on the shores of Loch Corrib. The small corked bottle is more recent and was given to me at Quantico after I had delivered a lecture.  It contains sand from Iwo Jima collected by the gifter and is one of my precious possessions; I know, or rather I am aware I can’t truly know, the significance.

Gifting is itself a critical ritual and its not an exchange per se, gifting is a recognition of some change of status.  It can be a way of belonging, a ritual of entry into a community without expectation of an equal reciprocation.  I never liked the idea of a favour bank which a fair number of my social capital friends use from time to time.  Come to think of it I don’t like the capital word applied to social that much either.

In any organisation, no matter what the size or history, there is a need to recognise any rite of passage for an individual or a team and to mark that in some way.   Now I need to declare something here, I have a very large collection of gifts given to be at events and a few previous ones that were gifts from teams I created and nurtured.  These things matter a lot to a sentimental Welshman but I don’t think I am alone.  Objects that carry meaning, that require a story to be told to understand their significance, are all to a degree sacred rather than profane.  And of course it is not just objects, meaning can be carried in a process and all such transitions are liminal in nature.

So we can now start to look at aspects of rituals, things that help us identity them and make them distinct from day to day mundanity.  That includes but is not limited to:

Now that isn’t complete, but its part of this process I am going through with this series of blog posts of identifying questions and typologies and distinctions that will allow us to map, and then manage habits, rituals, symbols and so on to better deploy, retain and create non-explicit knowledge (I am avoiding the tacit word for the moment).

I should also be clear that I am not using sacred and profane in Durkheim’s sense of reserving the sacred for things set apart, requiring awe, worship and so on.  The mundane for me is not profane, and can be sacred.  Which is not to say that there is now place for awe, respect and reference.  In a very real sense religion has its highest social utility when it is a part and parcel of day to day acts of living.  So we now have two dimensions to understand the nature of ritual: (i) the degree of symbolic meaning and (ii) the level of reference, preparation and so on needed to engage.

Today’s forecast was not good, but it offered the prospect of a fine afternoon, albeit that the wind would remain unrelentingly strong. 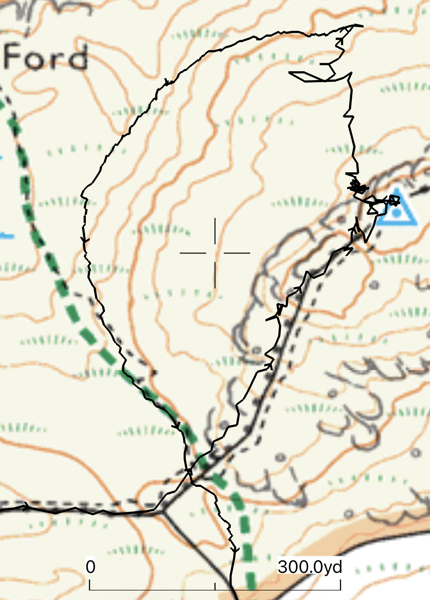 So I settled on a  walk in the Northern foothills of the Carneddau, starting off in the delightful town of Rowan and eventually reaching Bwlch y Ddeufaen, the pass on the Roman Road from Deva to Segontium.  This is also the point at which the Welsh Princes would almost certainly have paused, before moving down to their manor at Abergwyngregyn, now a small village but capital of Wales following the Treaty of Montgomery.  From there the plan was to follow the ridge over Tall y Fan and then drop down to Llangelynnin Old Church before heading back to the car.  The initial climb from Rowan is on tarmac and very steep, but eventually after you pass the Youth Hostel you are on better walking with good views.  The banner picture

is taken from there and as you can see it revealed the rain advancing towards me from the Conwy Valley.   I donned over trousers and put the waterproof cover on the rucksack and prepared for what I hoped would be a temporary downpour.   It was unrelenting and when I got to Bwlch y Ddeufaen I was on the point of turning back.  A group of saturated mountain bikers  who had been blown uphill to that point, suggested I do the same before they headed down the way I had come but a perverse side of me thought it would be OK.  So much buffeted, I got to the summit of Foel Lwyd but at least the wind was behind me.  I then carried on the col between that and Tan y Fan and again thought of abandoning the walk by hoping over the style and getting back to the Youth Hostel by a more direct route.  But I went on and made the summit at which point the already difficult conditions suddenly deteriorated.  The wind suddenly gusted badly and tore the cover off my rucksack flattening it against a stone where I just managed to retrieve it.   I ended up crouched on the ground and finally found a gully to crawl down (see track to the left, the vertical squiggle is me going down the gully following a stream bed)  to drop height to the point where I could stand up again and struggle back to that style and the short cut.   I was pleased I didn’t panic and did all the right things and even more pleased that the Paramo top, Rab waterproof over-trousers and gaiters kept me warm and dry regardless of the elements.

Then, on the way down the sky cleared and the sun came out.  Too late for me to have waited out the wind but the light was glorious as can be seen below 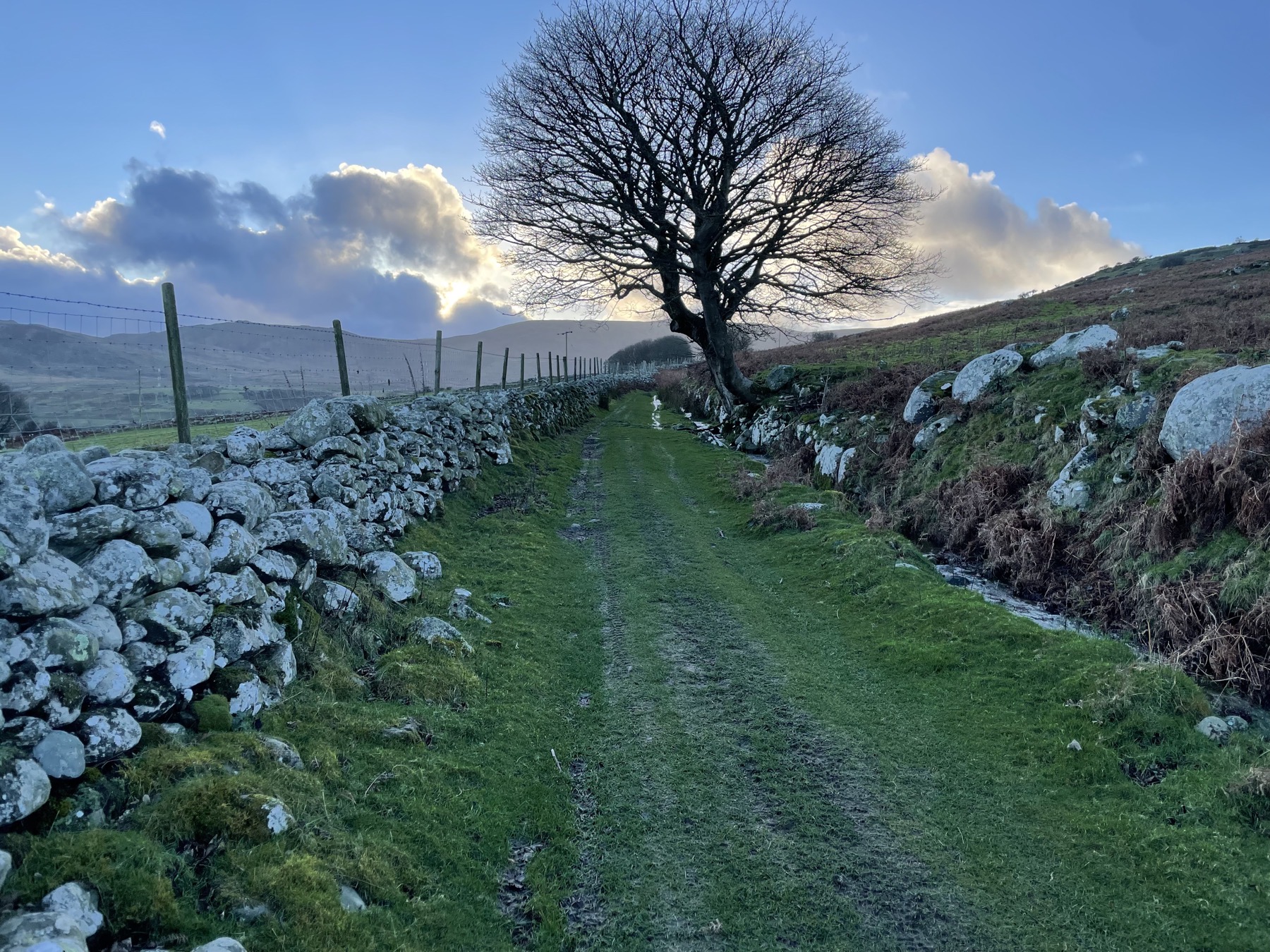 I can’t really imagine going walking without a camera, and by that I don’t mean ...

Mapping and the need for maps underpins a lot of this series of posts - ...