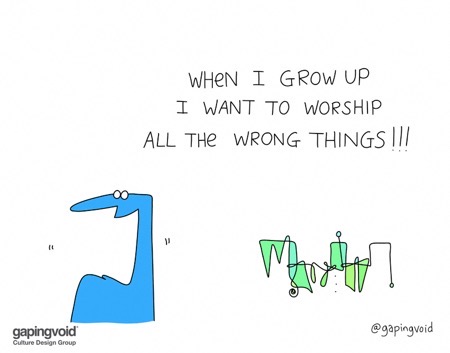 For the first substantive post in this series, I wanted to pick up one of the more controversial elements of human systems namely the pervasive nature of religious ideas/ideology; which is not the same thing as a formal religion.  There are arguments in evolutionary psychology (I’ll try and find the paper and reference it later) that religion is innate to humans as a species, it’s not something we can avoid and if you want an example of that just look at Richard Dawkins.  He writes a criticism of a series of strawmen with all the vehemence of warring religious groups undergoing a schism.  As Midgley famously said he has made Atheism a religion, and an intolerant one at that, of which he is the first and highly judgmental prophet. Lunging, Flailing, Mispunching was the title of Terry Eagleton’s 2006 review of The God Delusion and that describes the book well.  I have several un-fond memories of some of the preachers in the Baptist Chapel in Mold during my early and naïve days as a Christian and Dawkins brings them back in spades.  I get really irritated on social media where there is a whole series of tropes which try and make out that you have to make a choice between science and religion, one we are told excludes the other.  Mostly these are based on the Enlightenment belief that religion only arose from the absence of scientific explanations.

Now in parallel with this, we have the whole I’m spiritual but not religious movement, often manifesting in a form of something called by its users Buddhism.  That use can range from a genuine adoption of the tenants of that religion to something I have called faux-Buddhism, often centred on the role of the Guru.  As a sidebar here I’d just point out that the relationship between Daoism and Buddhism is worthy of investigation, but not here and now.  There are some misunderstandings; I remember being given a lecture on the value of meditation and being told that it all arose from Buddhism.  I gave the individual concerned a copy of Loyola’s Spiritual Exercises and some other references and they did realise that meditation is a part of all religious traditions.  Its trivialisation into the Mindfulness movement, replacing years of study and reflection, with an industrialised recipe is an example of faux-Buddhism.  Then we get the more extreme forms with the eugenics of cult forms of development models such as Spiral Dynamics especially the Wilber variations (and corruption) of Integral Theory.

Jordan Hall and others have pointed out that modern Technocracy is a form of pseudo-religion, seeking (and he explicitly mentions Cynefin) trying to make the complex complicated.  I have some general issues with a lot of Jim Rutt’s work and I think he lost a lot of the value in the original Hall vision of Game B and I have various concerns with augmentation and the like but this podcast is worth listening to as it demonstrates the way in which a large part of West Coast attempt to create a “Religion which is not a Religion” as a response to what they call the Crisis of Meaning.  To be very clear I disagree (to varying degrees) with more than I agree with that podcast but it’s valuable material and it makes my wider point that we really can’t avoid religion as a species.  And its about meaning-making and as such can also be understood, in terms of Constructor Theory, or at least my derivative work on Estuarine Mapping, as a means of reducing energy costs involved in creating community engagement,  Humans evolved through social support and identity and religion in multiple forms has always been a part of that.  Identity here is linked to belief systems and that can produce conflict between ideologies as well as heresy.

Now heresy is important in meaning-making and I have previously confessed my Pelagian tendencies.  Dissent creates differences and the way we think about the world changes in consequence and that change can be for good or ill.  The stage-based approach, ideas of an end of the Axial era, the Fourth Industrial Revolution and so on are all I think flawed as they carry this highly culturally specific concept of ‘progress’ as always being for the better.  We also see much of this in modern management fads and theories.  Each new fad makes religious claims and requires faith, and each in turn disappoints.  Great leaders are called charismatic and, from an employee perspective, the elite mostly speak in tongues, not in the sense of many languages that having meaning of themselves, but rather the psychobabble of change, employee engagement and so on.  A belief structure, rituals, and common perspectives all reduce the energy cost of decision making and religion has proved itself one of the most effective means in our evolutionary history.

This is a series about what makes humans different, and why complexity in human systems is not the same as in crystal formation or termite nest building.  I’m playing out ten characteristics and I will look at some of the consequences in the final summarising point of the series.  I’m a Catholic, in the Latin tradition with Pelagian tendencies and an interest in the links between Celtic Christianity and the Orthodox tradition.  Also, I didn’t grow up in a religious family, both my parents were agnostics, so it was for me a choice, or rather a series of choices.   I’m being open about that, but I am not proselytising here and I’m more than aware of all the appalling things that humans have done over the centuries as a result of belief systems, many of them atheist.  I am simply pointing out that coherent belief systems are a part and parcel of what it means to be human.  I’ll deal with mystery and the sacred in a future post by the way.

As a general theme for the Twelvetide series this year I am using Renaissance artists, ideally with a journey theme for the banner picture which may or may not relate to the ideas in the post.  Then a Gaping Void image to open the text and make a point.  Sometimes I will spell that out, sometimes I’ll leave it hanging.

The emerging plan for this year’s series was to look at the various unique aspects ...

The importance of narrative in understanding human systems has been a large part of my ...