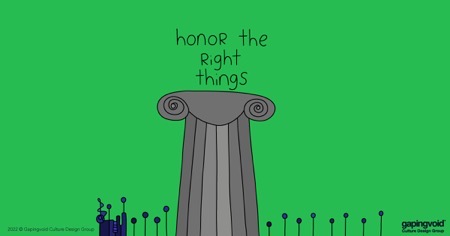 I spent most of yesterday’s post using the apprentice/craft hall set of practices to illustrate the unique ability of humans to create social mechanisms that transfer and enhance knowledge transfer between generations and also communities.  I’m using knowledge there in a general sense that includes practice as well as theoretical knowledge.  Today I want to move on to the various ways in which we provide social cohesion through various rituals and transition rights.  Some of these seem common to all human systems over time: birth celebrations, transition to adulthood, pair bonding, funeral rights and so on.  Any reading in anthropology will reveal the rich variety of such practices that have evolved and there are many of them.  I talked yesterday about Apprentices walking the tables to demonstrate to the community, but also to themselves that their identity in the community had changed and they now had new responsibilities and obligations, along with freedoms.

Mary Douglas in Purity and Danger is worth reading in this respect, and many others and she identifies the ways in which concepts of what is clean and unclean, the nature of the scared.  Transition ceremonies can also be trivial.  I remember my sister, years ago, when she was asked by IBM to work from home (she was a systems programmer) decided that she would dress in work clothes and walk around the block before returning to a designated room at her designated start time and the process would reverse at the end of the day.  I need to confess that approaching midday I am still in pyjamas and during Covid acquired a series of camouflage jumpers that could be pulled on at short notice to appear more respectable.  Some organisations are now designing rituals for the transition between home, hybrid and office working.

Both my parents had humanist funerals, but those contrasted greatly with the full Irish wake for my Uncle I attended with them.  Both marked a type of transition although the former was more abrupt than the latter.  Last year my Twelvetide series handed rituals and habits, the first, on ritual includes my own wedding photo and the second looked at the ways in which small rituals act as memory devices.  The passing of life is important and all human societies have marked it.  We also create atonement and purification rituals, which is not to say they are all right or appropriate in a modern age, but we create them.  All of these are critical to holding society together and giving a degree of predictability to human interaction; energy reduction again.

Dancing and music also evolved, merged and are common to all societies as is common prayer and contemplation.  The same is true of children’s play and the unique games that arise in different societies, mostly to teach as well as to entertain. We rarely do anything in isolation from others.  Rituals often allow people to disconnect themselves from the reality of what they have to do (Doctors dealing with death) or what they should never be allowed to do (the rituals leading to capital punishment).  All of these things act as symbols and signifiers of meaning to those who we interact with.  Myerhoff famously said in her 1997 book Secular Ritual that “not only is seeing believing, doing is believing.”  Rituals, like the first murder by an initiative into a gang act to change identity and perception.  By the end of the Christmas period, I will have attended two away and two home matches to support Cardiff Rugby and I always don tribal colours for the occasion.  It is far more than a game, it is an identity and a sense of belonging that cement communities.  I can be a Cardiff supporter relishing our last-minute injury-time defeat of Newport a few days ago, but I can be one with their fans next year in the Six Nations where we are all Welsh.  If you haven’t been to a major sports stadium and become part of the crowd you haven’t lived.

This is a shorted post than others in this series and I am including by reference my earlier posts on the subject.  Critically, and this is the point, humans are the only species who create rituals at scale

Study of a foetus in the womb
Artist: Leonardo da Vinci,   Italy  1452-1519
This banner picture is cropped from the original

As a general theme for the Twelvetide series this year I am using Renaissance artists, ideally with a journey theme for the banner picture which may or may not relate to the ideas in the post. Then a Gaping Void image to open the text and make a point. Sometimes I will spell that out, sometimes I’ll leave it hanging.

So I've now flagged up religion and narrative as distinct aspects of human systems, and ...

I need to acknowledge my debt to Terry Eagleton for his two books Radical Sacrifice  and Hope ...