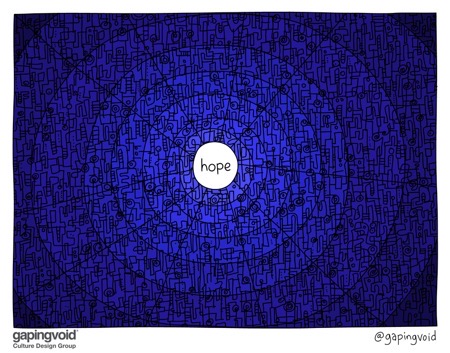 If you don’t know, in the Catholic tradition Hope is a theological virtue and it’s worth quoting Pope Francis in a letter issued this February, preparing for the 2025 Jubilee Year: “We must fan the flame of hope that has been given us, and help everyone to gain new strength and certainty by looking to the future with an open spirit, a trusting heart, and a far-sighted vision” and the letter goes on to talk about refusing “to turn a blind eye to the tragedy of rampant poverty that prevents millions of men, women, young people, and children from living in a manner worthy of our human dignity”. The theme of the 2025 Jubilee year is Pilgrims of Hope and you can find the full text here.

From my perspective, this is all a welcome return to the theme of Truth and Justice which got lost, post John XXIII,  in an ultra-conservative obsession with sex.  I’ve previously mentioned this in the context of Laudato Si’ which addressed environmental issues and responsibilities and has some resonances with the discussions Beth and I had with Tyson and other indigenous leaders around this time last year which continued into work in Brisbane last July and will continue next year.  Peace and reconciliation are not confined to human-on-human interactions but also to humans and the planet of which we often don’t realise we are a part

Now you don’t have to be a Catholic, or a Christian to recognise the value of those quotations and their importance within a fractured world, but returning to Terry’s book you can have Hope, but that doesn’t require optimism.  In many ways, optimism is a form of false hope, a means of self-deception to avoid the harsh realities of our current situation.  I never thought, back in the ’70s that I would approach 70 with a potentially catastrophic collapse of the environment, a major war in Europe and British Nurses having to use food banks in order to eat.  Those with a classical education will also remember that only hope remained in Pandora’s jar.  In general Greek, Philosophy sees hope as negative and that gets picked up by the Stoics in the sense of avoiding accepting the present in favour of the tranquilly of the soul.  Yes, I know that is a little unfair, but I’ve always had a negative response to stoicism, especially with the adoption of Marcus Aurelius by the wrong sort of new-age thinkers as a means of avoiding the responsibility to take action to change things.  I always felt Zeno corrupted Diogenes idea that virtue is revealed in action. One of my favourite quotes from Diogenes, responding to Alexander “I am searching for the bones of your father but cannot distinguish them from those of a slave” which is a proper response to power.

I first studied Jürgen Moltmann’s Theology of Hope back in the 70s, it was a part of the canon of works associated with Liberation Theology.  Thanks to a discussion with Herbert McCabe brought me to Aquinas who provides the first detailed treatment of the idea in the western canon.  He distinguished between hope as passion and as a theological virtue, between the hope of earthly goods and seeking out the Kingdom of God.  In recognising the former he broke from the Neo-Platonism of Augustine (who I really dislike by the way).  Critically he argued that hope could provide for a rational agency, the ability to engage the knowledge to achieve a desired future state and to energise people to seek to achieve that.  For Aquinas, hope does not relate to an immediate desire but to a future state which is difficult, but falls within the range of what is plausible.  As we move into more modern times Hobbes sees it as appetites and aversions, Spinoza as a form of pleasure but not desire linked to superstition.  Hume sees it as a direct passion.   Kant brings it back to religion and links it to faith in immortality.  Nietzsche rejects the whole idea as a failure to understand our relationship with the world.  Schopenhauer recognises that hope may sharpen the way we see the world but also that it may blind us to what we need to see, in fact, he talks about it as a temptation.  Camus’s The Rebel was described by the author as a book of hope and I’ve always seen The Plague in that light.  As a sidebar, I’ve always seen Camus and Sartre as best expressing their philosophy in their novels.  At the end of The Roads to Freedom Mathieu makes a last stand in hope of authenticity, or at least that is my interpretation, and in that lies hope for the future.

That is about the limits of my notes from my undergraduate days.  We had a curriculum constrained by the Anglo-Saxon tradition, indeed when I asked for a course on Existentialism I was told to address my request to the department of European Literature.  But if I come back to the Pragmatists, and anyone in complexity needs to have a basic understanding of that school, we get the idea of meliorism which sits between optimism and pessimism and is the belief that humans, can by their actions make progress in the world, progress that is an improvement over the natural form.  To be honest, I tend to stop there, the current debates in analytic philosophy leave me dead but I will bring in Ernst Bloch whose The Principle of Hope is of critical importance to any materialist or realist approach to the subject.  I’m not getting into processional metaphysics at this point but I love Bloch’s idea of “Militant optimism” which requires us to engage with making a different future possible and that isn’t the near utopianism of Rawls who I dislike intensively along with Rorty to a lesser degree. Bloch’s concept is evolutionary in nature, it recognises objectivity avoiding the traps of subjective beliefs.

Now I hope (sic)  I’ve done enough to convince you that hope and expression of hope are key to human systems.  I fully realise that my summary of the history of thinking on the subject is superficial and again I can only commend you Terry’s book which has all of this and far more, including Terry’s ability to link philosophical thinking to literature.

But I do want to finish with some reflections on what isn’t hope in the context of contemporary politics and organisational practice.  So let’s make this a list of three types of sin and yes, I’m going to be polemical:

So this has been a reasonably philosophical/theological piece and I make no apology for that.  I’ll try and get more down to earth tomorrow and I’ve got four more posts before we get to the eve of Epiphany.  I want to close this post with  the quote that opens Terry’s Hope without Optimism,  from our mutual friend the late Herbert McCabe OP:

We are not optimists; we do not present a lovely vision of the world which everyone is expected to fall in love with.  We simply have, wherever we are, some small local task to do, on the side of justice, for

It’s all about the small things, the micro-nudges that shift a system; grand visions, purpose platitudes and the like are all about false optimism and are without hope.

Praying Hands
Artist: Albrecht Dürer. 1471-1528 Germany
This banner picture is cropped from the original & then replicated

I need to acknowledge my debt to Terry Eagleton for his two books Radical Sacrifice  and Hope ...