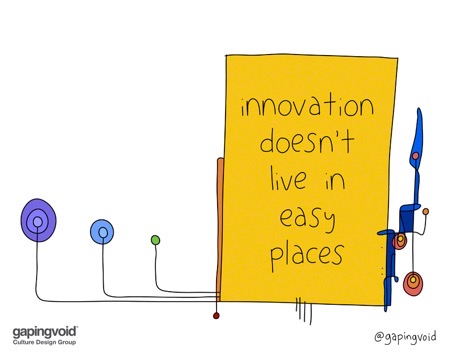 Curiosity may have killed the cat, but it made humanity. One of my favourite stories from my own, and my children’s childhoods is The Elephants Child who “filled all Africa with his ‘satiable curtiosities” and spanked by his relatives for asking too many questions.  “One fine morning in the middle of the Precession of the Equinoxes this ‘satiable Elephant’s Child asked a new fine question that he had never asked before. He asked, ‘What does the Crocodile have for dinner?’ Then everybody said, ‘Hush!’ in a loud and dretful tone, and they spanked him immediately and directly, without stopping, for a long time.”  His resulting trip to the “great grey-green, greasy Limpopo River, all set about with fever-trees”  and his encounter with the crocodile means that his “blackish, bulgy nose” stretched in a tug of war between the crocodile and the Bi-Coloured-Python-Rock-Snake to become his trunk which has considerable utility if picking up fruit, slapping cooling mud on his back and picking up grass to eat.  Oh, it also allows him to spank all his relatives in return.

Like all the Just So Stories, Kipling’s ability to play with language is a delight, and the very sound of the words tells you their meaning.  In a very different way in a different time Dylan Thomas does the same,, just think of the opening of Under Milk Wood: It is spring, moonless night in the small town, starless and bible-black, the cobblestreets silent and the hunched, courters’-and-rabbits’ wood limping invisible down to the sloeblack, slow, black, crowblack, fishingboatbobbing sea. The very use of language excites curiosity, it plays games with words that challenge the literal and explore the poetic,

So this penultimate post deals with curiosity and incorporates the whole process of innovation and scientific discovery.  It is also the last specific post, tomorrow will be a summary of the series with a little bit of plugging the gaps as I could have gone on for longer on this them.  The opening picture was chosen for multiple reasons. Tintoretto was originally apprenticed to Titian but was dismissed after a few days.  One account attributes the jealousy, another to personal friction something that continued for their lives.  Interestingly while Tintoretto continued to express admiration for Titan, the sentiment was not reciprocated and Titan disparaged and encouraged the disparagement of Tintoretto.  The net result of this split was that Tintoretto was largely self-taught but also worked with craftspeople decorating furniture and also studied anatomy not just through drawing up but also dissection.  So the painting itself, by its title, talks to the human desire to discover the WHY of reality rather than just accept it.   It also illustrates the way that existing bodies of knowledge are disrupted by rebellion, which doesn’t mean that all rebellion moves the field forward. The conservative nature of the Guilds (going back to earlier in this series) acts as a sea anchor not a lead weight on the development of the craft.  If you want to innovate you will not, to quote the Gaping Void cartoon, live in easy places.  It’s the type of balance which is important in human systems.  Not everything should be novel and not everything which is novel is progressive.

This question of balance and tension is important for humans.  I’ve long made the point that in the medical profession, you have an interaction between practice first then theory and theory first then practice: the different roles of nurses and doctors.  We see something similar in the relationship between non-commissioned and commissioned in the Army and in many other fields of life.  Friction or gradient is critical to disturb the equilibrium and enable innovation but we don’t want constant change.  We also have the tension between science, spirituality, poetry and so on.  One should never really privilege one over the other, but their interaction creates differences.  Mary Midgley in Science and Poetry makes this point well.  There is also a theme here that links to an earlier post I wrote on connecting but not abolishing silos, a theme to which I will return later.

One of my favourite books is Deborah Gordon’s Ants at Work not just for its fascinating explanations of any behaviour but for the introduction in which she thanks the one assistant who managed to stick the course of putting paint dots on ants in one nest and studying the results for years.  It’s a wonderful tale of obsession leading to discovery.  The whole history of science and the arts contains many examples of our obsessions in the service of discovery.  So there is another link there to an earlier post on sacrifice.

In our own work, we use Natural Science as an enabling constraint.  We are not naïve enough to think you can apply a 19th Century conception of the scientific method to human systems, there are simply too many variables.  But taking things known to cognitive science and asking What does that mean? is highly disruptive of orthodoxy.  Once you start to understand non-cartesian models of consciousness then the whole mental models and mindset stuff has to be rethought and in many ways abandoned.  By bringing different disciplines together we enable discovery, but it does come at a cost.  People don’t like their complacencies disrupted and the Woozle effect is almost at pandemic levels in management science.  Humans can get utility from more or less anything, but that doesn’t justify a construct built on the sands of shoddy research or worst still the argument from limited personal experience – something often mislabeled as empiricism in the Agile community.

So curiosity is fundamental to humans as is playfulness, indeed play lies in much of the practice and language of discovery.  And in that spirit, I will close, with the close of Under Milk Wood.  I’m not sure why and I’ve no idea if it’s relevant or not but I just feel like it.

The thin night darkens. A breeze from the creased water sighs the streets close under Milk waking Wood. The Wood, whose every tree-foot’s cloven in the black glad sight of the hunters of lovers, that is a God-built garden to Mary Ann Sailors who knows there is Heaven on earth and the chosen people of His kind fire in Llaregyb’s land, that is the fairday farmhands’ wantoning ignorant chapel of bridesbeds, and, to the Reverend Eli Jenkins, a greenleaved sermon on the innocence of men, the suddenly wind-shaken wood springs awake for the second dark time this one Spring day.

The Origin of the Milky Way
Artist: Tintoretto  1519-1594 Italy
The banner picture is cropped from an original

There is a logic in going from politics to justice.  The two are not the ...

So it’s Twelfth Night, the eve of Epiphany and I’ve reached the end of this ...