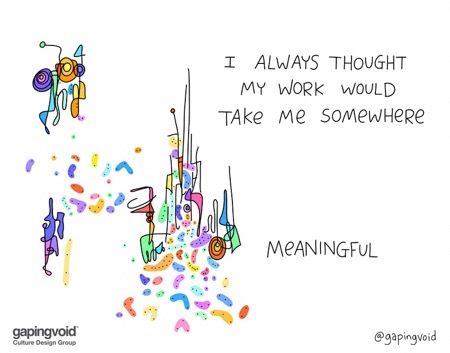 So it’s Twelfth Night, the eve of Epiphany and I’ve reached the end of this series for another year. I’ve enjoyed writing it and although I didn’t start with a detailed plan of the subjects to be covered, each more or less emerged from its predecessor.  Finding the banner pictures and choosing which Gaping Void cartoon was a part and parcel of that.  The opening post provided links to all my previous Twelvetide posts and in doing that I remembered that I never completed the 2016 set using Welsh Poetry as inspiration so I intend to rectify that over the next few weeks.  I’ll retrofit the dates but own up to it in a note on each post.  This year I was also at home and at leisure so there has been a routine to my writing each day.  In the last few years, I’ve written the series while hiking in the Lake District or Eryri.  This year I had a week before Christmas and head out again for a week from next Saturday.  There is something about only really having one major task each day during a holiday period and it worked well for me.

My overall theme was what makes a human complex system different from others and I was a little worried I might end up replicating material from 2017 but I didn’t need to in the end and I think I could have carried on with another ten with ease.  The first substantive post was about the energy efficiency of belief, followed by ‘are you sitting comfortably’ on the role of narrative.  Then two posts on social rituals, the first in the context of work, and the second in play.  After that, I got it down to single-word titles covering sacrifice, hope, artistry, politics, justice and finally curiosity. There is an overall theme here, aside from what makes humans different, I’ve also been building to a wider exploration of meaning and meaning-making.  Something that has been a theme ever since I started blogging many years ago while on a three-month sabbatical in Singapore.  That is reflected in the Gaping Void cartoon for today; less of a plan, more playing with a sense of direction.

Now I want to emphasise something there, and I appreciate that no one has pinged me on this; I realised early on that I had made myself vulnerable to an accusation of anthropocentricity.  I’d prepared a response, but as I didn’t need to use it, I will lay it out now: we are very different from other species, but I don’t think that privileges us over all other entities in the Universe or even this planet.  We don’t respond to stimuli, we have developed the capacity to be motivated other than by sustenance and reproduction but if anything that makes us more responsible for the way we act.  On a call yesterday I was arguing for a peace and reconciliation process between our species and the planet, anthropomorphising the planet is not the same thing and I think an error.  And remember here the theme has been Renaissance, not Enlightenment.  In that context, I’ve talked about the value of our interactions with indigenous groups over the last year along with recalling other practices and activities of the species over the years, such as apprentice models that continue to have utility.

We are not stewards, that is all the wrong metaphor, we are entangled with each other and with the whole ecosystem of which we are a part; we are not holding it for ‘another’ or even future generations.  That all implies ownership, instead we need to understand our entanglement and our path dependencies.  Idealising a future state and future characteristics based on our view of what a responsible species should be  is not the way we go.  It is why I am deeply suspicious of much that is called meta-modernism and the whole Inner Development Goals idea.  Both, at least to me, appear to be lotus-eating, a means of distraction from reality by an elite seeking to disengage by setting impossible preconditions for change rather than engaging.  I know that is controversial and I will develop it in future posts.   We need to recognise the messy coherence, and incoherences of the here and now, the path dependencies we have created and discover new pathways in the process of exploration.

I realised fairly early on, that I would end my Renaissance artists series with Caravaggio, my favourite artist of all time and who inspired the creation of liminality in Cynefin.  I’ve played with various options over the past week but finally settled on his Calling of Saint Matthew, a sudden conversion and a moment of enlightenment.  There is some irony in that choice as the more discerning reader will realise.  Interestingly this painting hangs opposite one of the Martyrdom of St Matthew which brings me back to an earlier set of themes in the series.   The choice also related to the whole idea of conversion and revelation along with wonder, all three of which were candidates for inclusion in the series but missed the cut.  I felt I had gone as far as I could with Catholic references in several posts so I’ll hold those for the future.

So this series ended up being more than a list of things that make us different although I did that in part.  Hopefully, it makes it clear why  I differentiate complexity in human systems from those in animal behaviour; what I have called anthro-complexity to contrast with computational complexity more commonly associated with Santa Fe et al.  It’s also why some time ago I started to talk about Naturalising Sense-making as the overall theme for what we do here in the Cynefin Co.  Anthro-complexity is one of the things we bring into play, but we also use anthropology, the cognitive sciences and a lot of the humanities and philosophy.  The field is trans-disciplinary and exciting in consequence but it’s not a comfortable place in a world in which specialisation is becoming a fetish.  All of that however leads to the key aspect of this series for me, and I hope for you:  its a plea for humanity, for recognising the entanglements of the past, present and potential futures; for reconciliation with each other and the planet; for a new Renaissance not yet another Enlightenment.

The Calling of Saint Matthew
Caravaggio: 1571-1610  Italy The banner picture is cropped from an original

Curiosity may have killed the cat, but it made humanity. One of my favourite stories ...

With Christmas over I’m starting to sort out engagements in Q1 which will include a ...