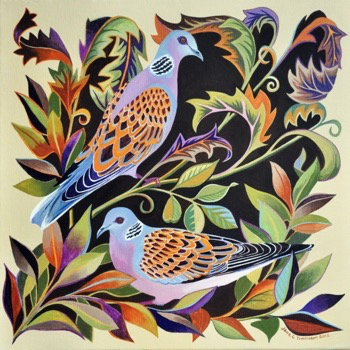 While the conventional interpretation relates to devoted love I want to look at this more in the context of love and loss, of dualities and the cycle between life and death and the seasons. So for this post I am looking more into the pagan, less the sophomoric complacency that graces the Christmas cards. That turtle doves are at risk of extinction in Europe is interesting but not particularly relevant to this post, although there are moves to bring it back from the brink. That it is a late migrant to Europe heading south between September and April is. The name comes from its ability to withdraw its head into its neck. In the modern age we also have (from one of my least favourite writers Richard Dawkins) the idea of a conspiracy of doves in which he looks at the application of Game Theory based on two strategies, hawk and dove where he makes the statement: If only everybody would agree to be a dove, every single individual would benefit. However the temptation to be a hawk amongst doves makes that conspiracy unlikely. Then of course there is the cliche of peace and more misrepresentation of the symbol than I care to think of over the years.

But back to the the idea of cycling between seasons, when we had them that is. In New York they have summer temperatures, here in the UK we have storms and flooding but no prospect of snow. Walking yesterday was more like wading through treacle given the volume of mud even up on the top of Pewsey Downs which are normally dry. But moaning aside there is a seasonal aspect to organisational design which is too often ignored. My favourite example of this is the constant organisation change between industry and capability focus in the services business in which I spent most of my life. What would happen is that one year we would be organised around a capability with the various experts centralised in a single management structure. But then after a period that would not produce the results and a lack of industry focus would be identified as a cause so we would be organised on industry lines. After a few years people would identify a lack of innovation as a problem and the reason – too much dilution of expertise over the different sectors and guess what, the organisation would switch back again. I use this as an example of a duel-point attractor when I am teaching people about complexity theory. In reality novel solutions needed people able to understand the new idea and industry was not an issue as early adopters have common life cycle characteristics that are more important than industry needs. As a product matured then it needed to have industry specific applications. The desire for a single form of structure meant that the system could not adapt and the failure to take life cycle into account was a major issue. What you wear in winter is different from summer. The risk of a long walk in winter is far great than summer and so on. Context is all and understanding the cyclical or linear nature of change is critical in design.

Another deeply negative type of cycle was something I came to understand in IBM and have seen in other organisations. Basically it went through the following stages:

Now in practice any major restructure will take 2/3 years to settle in so expecting immediate change is a nonsense. If you build and commission a machine then you can expect results, but with humans you are managing a highly complex ecology and that takes time. Informal networks alone have to be created to make the formal systems work and that has a dependency on trust which generally takes a couple of years to build. Key knowledge assets are also lost and have to be recreated; often by the time the loss is realised its too late to recover.

So we have positive and negative aspects of dualities and seasons. The response to problems of the present without analysis and understanding is a part of the problem. When that analysis is based on cases rather than natural science it also tends to perpetuate what the research or consultant happens to have noticed which makes things worse.

Then we get to the peace giver and I can match the Dawkins quote with one from the Gospels:

Behold, I send you forth as sheep in the midst of wolves: be ye therefore wise as serpents, and harmless as doves. [Matthew 10:16]

Now this is not a bad sense of general guidance for the OF professional and it has multiple levels of meaning. The main lesson I want to draw is that telling wolves they should be nice to sheep and running mindfulness sessions to encourage it is in oh so many ways doomed to failure. The wisdom, or cunning of the serpent is to know more about how systems impact on, and are impacted by, the nature of human decision making. Popular How to do it or worse still How I did it aren’t I wonderful management books is neither wise not cunning, but such books can be used to confuse the wolves ….

So what lessons can we draw from all of this?

One of the issues I've found with the Twelve Days of Christmas nursery rhyme is ...

I must admit that this was one of the most problematic of the verses when ...