The holiday is settling into a routine now.  Every evening over a meal the whole party vow to get up early in the morning and there are various commitments to match my endeavours in the swimming pool.  Then I wake up around 0600, clear some key email until the sun rises and then head for the swimming pool.  Five damp hand marks on five stone liners ensure the fully fifty lengths are complete and I then make the first coffee of the morning, have breakfast and read until the masses assemble.  Then there is a negotiation and finally the whole or a sub-section of the party enter the Fiat van for the hazardous trip to the road and a final destination.

Today's party excluded daughter and friend who felt the need to improve their sun tan and recover from wine consumed the night before.  We headed for Assisi long looked forward to as a highlight of the trip.  We had a agreed a side trip to Perugia to visit the tourist office and I set the sat nav accordingly.  This was a mistake, the route in involved a narrow medieval gateway in the city walls and we had to co-ordinate the folding in of wing mirrors.  The route then involved multiple twisting seats, several three point turns to simply make a left turn and then a confrontation with the municipal authorities when I finally parked.  It turned out that (i) I was parked in a slot reserved for officials and (ii) we had no permit to be in the centre anyway.  Of course they waited until I had paid for the parking before telling me.  So we set off again.  The exit involved a near vertical descent on smooth cobbles with hairpin twists and by the time we got to a less punishing route I was frazzled to say the least.

The first view of Assisi however was compensation, spectacular with sun catching the stone through dark clouds.  Parking was easy and we found a great place for lunch.  Afterwards I steered the party to the walk from the town to St Francis's retreat but it was obvious after ten minutes that this was a major trip so the rest of the party turned back.  We could have taken a taxi but I was now set into the walk which turned out to be several miles and all uphill.  However if St Francis could do then so could I and the moral superiority over various nuns and priests who had been driven up was its own reward.

The place itself was reward enough if you could avoid some of the less respectful tourists.  The contrast with the main Cathedral is extreme and the story of the rapid commercial exploitation of St Francis within days of his death has a lesson for us all.

I spent a fair amount of time there and then wandered around the woodland paths where I could have spent the rest of the day.  However I had arranged to meet the rest of the party and was already late, but too stubborn to get a taxi back so I walked back at pace and joined them in the Cathedral.  It's a real mixture of the sublime and the profane and like most others I broke the rules on photographs.  The tomb itself is impressive and the wall paintings are worth the trip for their sake alone. Pictures of the day are here. 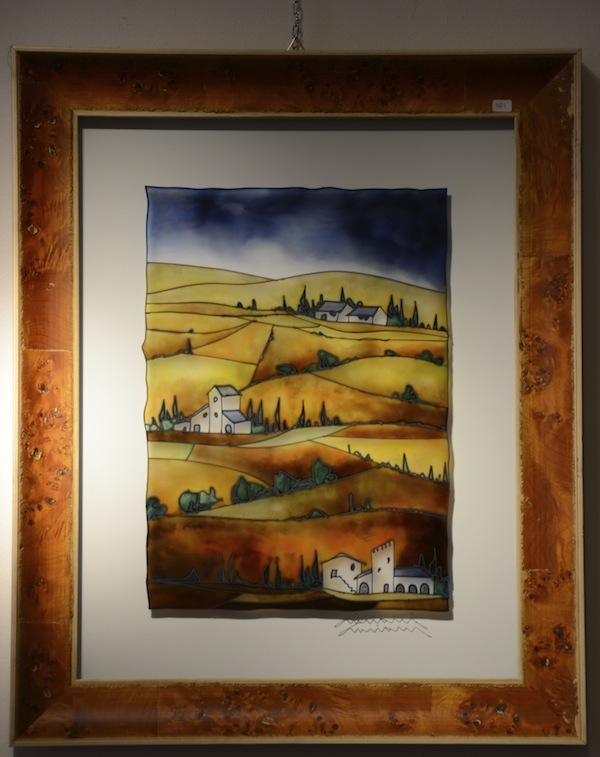 We moved around and about and finally headed back for the car.  We have a tradition of buying a painting on holidays, oils where possible.  However on the walk back to the car we came across a shop selling paintings on glass and fell for one (illustrated) which will get shipped home in a few weeks time.  The colours and lines of the hills will be a reminder of a part of Italy I really wished I had explored before.

The routine of eating and drinking and talking together in the evening was a pleasure and I am convinced of the value of family holidays including people who are not family.  It changes the dynamic, prevents familiarity and generally adds interest.  I have to say the all are showing solidarity with my diet in all bar their consumption of wine which is appreciated.

I'd like to go back and explore those woods and the walk over the hills but I doubt I will get consent. I do know that any attempt to get me to drive into medieval hill top towns will be resisted.  Only those with car parks outside are acceptable!

Well my resolution to convert my owls to larks failed miserably but I was compensated ...

The St Francis theme is difficult to escape.  Gubbio has the legend of him converting ...