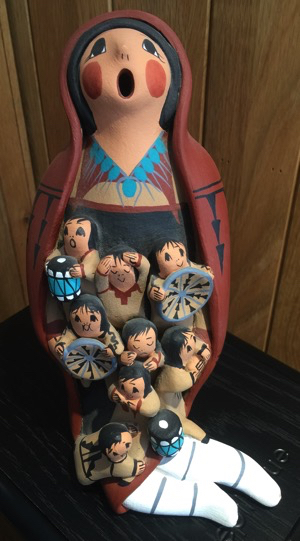 The headline of this post comes from Søren Kierkegaard’s famous quote “Life can only be understood backwards; but it must be lived forwards.” It came to mind in a Facebook exchange prompted by Sonja Blignaut. Sonja had referenced one of several conversations in South Africa in which I strongly asserted that until we change the way we describe the past we can’t create a new future. My reference was to post-conflict situations but it is more generally applicable. If you check the threat you will see that there was a negative reaction which I will not summarise; you can judge it for yourself. I did however promise to post on the subject today and on this occasion I can keep the promise!

I’ve opened the post with a picture of one of my favourite purchases. Bought in IBM days when I organised an IKM meeting at Santa Fe, it is a Storyteller figurine from the Pueblo people of New Mexico. The mouth of the mother is always open; a singing mother surrounded by children. We learn the stories of our clan, our family, our society through the narratives we encounter in youth. For me that was the oral tradition and literature, for my children the balance shifts to social computing which I am no longer sure (if I ever was) is for the best given the algorithm and socially induced echo chambers that environment creates.

I grew up on the classic British Children’s literature the vast bulk of which was written in the interwar years. A period for literature in history that matches the Elizabethan and Jacobian periods in quality and depth. My values and defining stories came from Winnie the Pooh, Wind in the Willows together with Swallows and Amazons formed my view of the world. Cully and the plight of the Seventy-sevenses and the Clidders from a later period also had impact. Then as I grew up In place of fear and George Orwell’s collected letters overlaid the values of a different generation and historical context. I make no judgement here, I am reflecting reality. I’m listening to the whole of the Swallows and Amazon’s series on audio book at the moment in preparation for what I hope will not be a disappointment with the new film due out next month. Now those magical books contain many of the assumptions of their time. Nancy and Titty to a degree challenge sexual stereotypes, but Susan, Peggy, John and Roger follow the norms of the time. Owning up to failures, resourcefulness under pressure, risk taking and loyalty all inform the narrative thread. The intimate detail of the camp site and boating exclude any mention of latrines by the way (only just noticed that).

Now I have made that personal to childhood stories let me extend it to peace and conflict at a society level, and that includes what I suspect are the terminal death songs of the British Labour Party. In any conflict all sides create their own narratives and those narratives are enforced by conflict. The echo chamber of social computing just makes this worse and we have been through something very similar with the Bernie/Hilary conflict recently. Each side only listens or propagates material that supports their own particular perspective. I had it this morning on twitter in a debate on open membership of the Labour Party. I take a perspective that the members of a political party should be ones to elect their leader, not anyone who fancies paying £3 on a web site to take part. My protagonist was not interested in the principle constitution point, for him all that mattered is whether the decision would influence the Cobynista case or not. Post-fact is a modern buzz phrase, but it is also post-reason, post-inquiry etc.

Now to argue that the solution is just to focus on the future is idealistic nonsense. It may make the advocates of such an approach feel happy but it won’t work, or rather it will only work in conditions where all of the past has been abandoned. Interesting you can see a future focus on American culture, people who moved their chose a new start, to abandon the old stories and create a new one. But our own narrative work in Latin American and elsewhere shows that stories of the past and present dominant outside of that cultural context. Not everyone wants to embrace the American Dream, not everyone wanted to be a part of the English public (which is private in the UK) school system at the height of Empire, not everyone wanted to be a Roman Citizen. The dominant power alway assumes that everyone wants to be like them which irritates the hell out of many of their imperial subjects. Cultural imperialism by the way is often worse than the physical manifestation as it is more invidious.

There are a few key issues here that we need to recognise, all of which I have spoken about before (and which will be in next weeks course) where I will develop some of these ideas in more detail on days three and four:

So, to change the past we first of all have to look at how those filters are activated, how we open up unexpected possibilities through chance encounters. We work in the present, we don’t create a convenient excuse of an idealised future state. More on that tomorrow, but to leave you with a quote from Carl Jung: “Thinking is difficult, that’s why most people judge”. To achieve change the dispositional state of the system as a whole has to be inclined to change, and for the better.

A rather eclectic series of thoughts make up this post. I spent an hour or ...