When first we practise to deceive!

Just to be clear up front, the title of this post is intended to be ironic and self-deprecatory as a tribute to the Olympic Opening Ceremony yesterday.  I must admit I have been a little cynical about said sporting event (and will be out of the country for most of it), but no longer thanks to the crass comments by a certain Presidential candidate.  Parochial is too good a word to waste …

Back to the subject in hand.  I promised to expand on the sub-framework I produced for complexity yesterday.  That framework used an idea from Ross Ashby of a stable state to which you have to return to contrast coherence and consensus and a zone or line of authenticity.  That also allowed me to start to represent disorder as two domains, that of the inauthentic and the transitionary.

Consensus means the degree of agreement that exists on either situational assessment or decision making (I will nuance that split at some stage in the future but for the moment they are combined) within the group that has power to act or inhibit action.  Coherence means the degree to which there is a sufficiency of evidence to support an appropriate action.  In the complex domain (and remember that is where we are) any appropriate action is a safe-to-fail experiment(s).  Coherence in the complicated domain would require empirical evidence as the ordered domains of Cynefin are subject to efficient cause (the same thing will happen the same way consistently given the same starting conditions) whereas the unordered are not.

The basic idea of this latest framework is that authenticity requires a balancing of coherence and consensus.  If both are low that is acceptable, it means we are living in uncertain times.  If both are high then we can have confidence in not only our understanding of the situation, but also of the outcome of our course of action. &nbspnbspIf you stray from the balance then things go wrong and you need to rectify the position.

Now that is what I want to explore today.  I whose the tangled knot as the header illustration for two reasons.  Firstly this is a bit messy at the moment and secondly I needed to save a larger version of the diagram than the header allows. 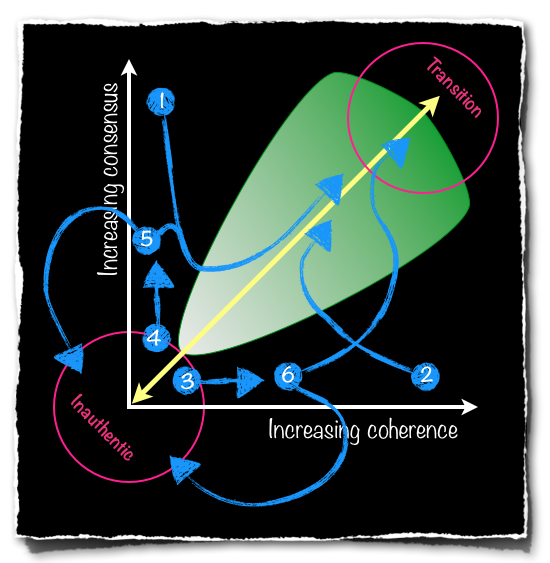 Here we have the diagram from yesterday, with various movements illustrated as blue coloured arrows.  I want to talk about each of those in turn.

Hopefully its not too tangled a web but it reminds me a bit of the first time dynamics were published in New Dynamics of Strategy where Cynthia and I put all the movements we could think of onto one picture!

So, remember that anywhere outside the green is a bad place to be and we can get started.

Now aside from seeking to gain more clarity about the complex domain, the framework also allows us to map ideas, where they stand and how they are used.  I am thinking of a SenseMaker® App for that, but workshop techniques need to be developed first.   Just like dynamics in Cynefin as a whole they are designed to provide guidance but not recipes for intervention.

So its messy, a bit a spider's web but the ideas are I think coherent.  It needs development, but I want to move onto the complicated, chaotic and simple domains first then start to pull it all back together.  That will take some time …

Just a note.  When I produced the original version of this the arrow that I now call 'authentic' was moving from chaos through complexity to order.  When I completed this with others in Switzerland in preparation for CalmAlpha, all of us realised after it had been drawn that there were similarities with the famous Stacy model.  Now Stacy deprecates the use of that, and it is different.  But Ralph and I have a lot in common as well as some key differences.  I'll forgive him for confining Cynefin (unnamed) to a footnote in his latest book.  I'll even forgive him for evidencing by his reference that he really hasn't done his research.  But I do need to post on that book 'Tools and Techniques of Leadership and Management' as its a good summary of Ralph's position and the similarities and differences are important and I need to explore them.  In the meantime read the book, its one of his best, but take the salt cellar with you

Rethinking the complex domain of Cynefin

Yesterday I took up again the exploration of Cynefin that I started back in January. ...

The Athens of South America

Having never been to Colombia I am now here for the third time in under ...