When to relax constraints? 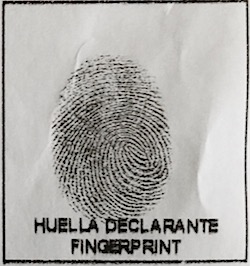 One runway was out at Bogota when we flew in late last night so we had to circle for 45 minutes before landing. The captain helpfully told us we had enough fuel which was slightly worrying as I would not have thought it was something on which we would need reassurance! Either way entry was as ever fast (many airports could learn from Bogota) and after changing some Dollars I was picked up and ended up an hour after landing, finally getting some sleep at the hotel. Changing currency was interesting as I had to finger print the various forms. Ever since we started doing business in Colombia I have had to get used to this. It took me some hours to find an ink pad one day when I needed to fingerprint a document. I ended up having to drive into Swindon which is something residents of the Kennet Valley try and avoid.

But it is another example of the use of constraints; designed as one of a series of measures to prevent fraud from an era where trust alone was not enough. Colombia is now a reasonably safe place to visit. You can walk around the city centre without threat. Yes there are dangerous areas but the same is true of London or any other major city; but it was not always thus. The use of constraints too create greater order has a long tradition in human society and the issue which we (as a species) hardly ever get right is when to relax them. As it happens I picked up news yesterday that Mike Leigh (who I had the privilege to meet at the Hay Festival last year) is to make a film of Peterloo. For those not familiar with that event, it is defining point in 19th Century British History, a key moment in the reform movement and one that people threatening not to vote should study. It’s an example of the excessive imposition of constraints by those suffering from both indifferent and fear. Reading the Riot Act to the Chartists in Newport is a similar example.

Of course these are examples from wider society but the same applies in organisations. If you have a crisis then the draconian imposition of constraints may be necessary, but you have to learn to relax them before resentment builds to the point where they may be broken by overt or (more dangerously) covert practice. I was very impressed in conversation with a senior Police Officer in Singapore a few years back. The necessity of constraint just under fifty years ago was pretty self evident, but the problem he was struggling with was when and how to relax those constraints without loosing cohesion in society. The very fact that he was aware it was an issue was to my mind impressive. One of the purposes of the chaotic domain model in Cynefin is to increase awareness of the role of the deliberate use of constraints in management. I’ve got some more work to do for that in respect of enabling and governing constraints for the book over the next month and I have some heavy reading with me (on bio-politics) which is helping.

So the issue is the nature of the constraints, the timeliness and the degree of permeability along with some other factors. Just allowing things to happen, which includes leaving useful constraints in place when their purpose has been served, is always a mistake. Shifting from dynamic management to static indifference.

An odd sort of a day today. I spent most of it working on ...

This is probably your first introduction to one of the new SenseMaker® logos. Powered ...