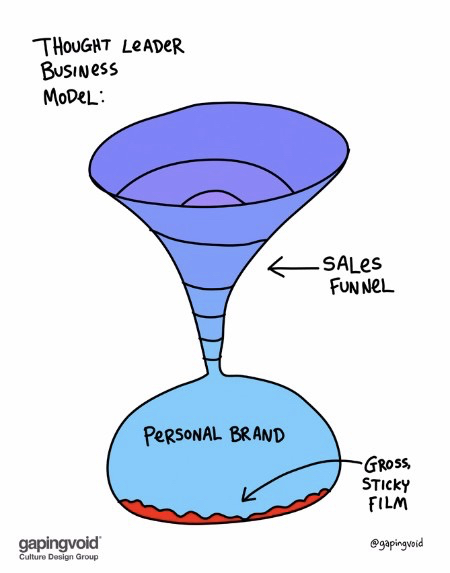 I should probably have watched out for today’s Gaping Void cartoon before mentioning humility in yesterday’s post! In the text that accompanied this cartoon we get: Thought leadership should be about giving. It’s about taking what you know and using it to help people around you. To innovate. To make your world a more meaningful place. Now nothing is every simple. There is a thought leadership model that seeks too lock people into dependency, often to create a cult linked to accreditation schemes and the like. Too often in the modern world authors are expected to create a single idea and claim originality when in fact they are simply building on the field. I discovered in a conversation with an agent last week that more money is made from speaking engagements than from books and the market pressure is one very simple idea every couple of years, a catchy title and a well rehearsed script that can be delivered for a fee. Neither of these is attractive, although aspects of both are tempting.

Since founding Cognitive Edge I’ve used a thought leadership model to generate revenue to support myself and other members of the team. I’m generous with my time and that means people book on courses and masterclasses and then some move onto projects. A decade on 50% of the business is no longer directly linked to me, which increases resilience and with the new participative programmes we are planning for the Cynefin Centre we will open things up for participation and some shared rights. IN particular for formal methods one should work collaboratively, ideally with competitors to create something of value. A lot of my objections to the pyramid selling schemes and propriety accreditation schemes that plague the Agile community is that are simply through together based on limited experience, then hyped based on a flimsy evidence base. Adding formal ‘qualifications’ with fancy letter combinations to add to your business card is a further sign of snake oil. Its pretentious enough to list qualifications won from professional bodies and universities, but at least they take time and effort. Creating ideas, training people in their use, seeing what happens is to my mind more authentic. The uses of the Cynefin framework are now legion and without proprietary control or licensing. I get several new articles a week that use it and few days go past without mentions of utility in social media. But then balance is needed, We patented key aspects of SenseMaker® in order to protect investment given the general lack of protection for inventors in most legal systems. Tools to use ideas are one thing, but the ideas themselves, those should be infectious in nature.

In reality very few aspects of human life have the tidy linear progression of a ...