The second day of my Exmoor weekend saw me awake to the sound of rain.  I indulged myself with a breakfast that required no other food to be eaten all day and finally headed for Lynmouth to get the bus back to the Inn.   Conditions were not brilliant so I thought it better to have the car at the end of the journey rather than trying to force the pace to make the last bus back.  Unfortunately there was no internet access or reception so I was not able to check the forecast.  Had I been able to do that the day would have worked out very differently.  I arrived in Lynton and parked to witness the heavens open.  At that point, I had more or less decided to abandon the walk for the day and take a leisurely drive home.  But there was half an hour before the bus left so I left to the Gods.  If it cleared up I would go, otherwise not.

The Gods are cruel and I should have known better, but the rain stopped with five minutes to go.   I got on the bus and was amused to see a couple of cyclists give up on The Exmoor Beast by sneaking onto the bus when no one was looking. I then realised I had left my water bottles in the car but the guidebook said there were plenty of streams so I thought I would be OK.  I should have realised it was an omen.   Dropped off at the Culbone Inn, I and trekking poles fell into a now well established rhythm and survived the steep descent to Culbone Church.  There was the odd rain shower, but I got a sense that this would be one of those days where rain and sunshine alternative.  The bulk of the path was also in woodland and was mostly on the level so I assumed things would be OK. 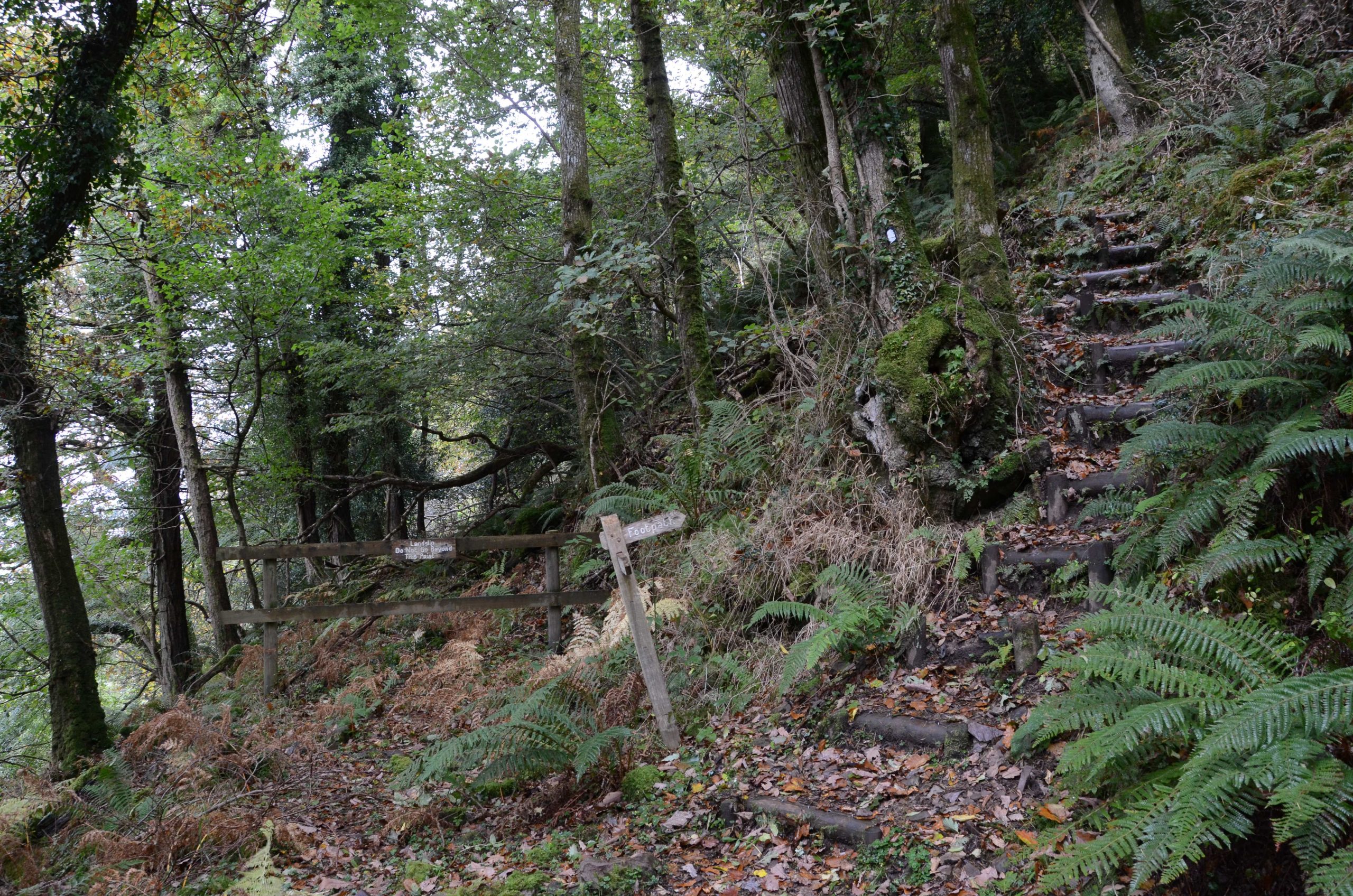 There were two warnings given as I re-engaged with the path proper.  One was for ticks, but that season was over; the other was for landslips.  The broad and easy to walk track was interrupted from time to time by signs of these older skip with stepped paths as diversions (see right).  What I hadn't expected was to be a part of one.

OK it was very muddy and sloppy but it was manageable.  I passed the Sisters Fountain in good spirits knowing that others before me had been inspired by the constant waterfalls that are a part of this section.  Sections of the Ancient Mariner are claimed to have been inspired by this section and half remembered passages came back.  I had to learn in by heart when at school for some competition; one of the most difficult tasks I remember from those days.

Beyond the fountain the track became wilder and the rain was settling in.  The wind was also rising, or rather the shelter was gone.  The track was very very difficult.  Mud, water, shale and narrow with sharp fall to the sea some six hundred feet below.  I was walking with care when I saw a tree ahead of me on the seaward border of the path start to move downhill, a moment later the movement included the section of the path I was on and I was caught up in a landslip.  Half remembered skills from winter climbing training meant I was able to arrest the fall before it became really dangerous but I was now some twenty feet down a very steep slope and my left knee was in agony.   I could not get up the slope until I shorted the trekking polls and used them like ice axes in winter climbing to literally drag myself back to the path.  The header picture gives you some idea of the territory – it was taken a few minutes before the collapse.

Things were not good.  It took me some time and effort to get upright and I could only hobble using the poles.  I had seen no one on the path that day and there was no mobile reception so I could not call for help.  There was nothing for it but to finish the six miles as there were no easy exits.  It was to put it mildly an agony and it was very very wet.  Coming over the shoulder of Foreland Point the wind and rain hit me head on.  By that time I had already fallen over several times.  Trying to keep your footing when one leg can only be placed on the ground with care and with pain is not easy.  I was muddy, tired, wet and increasingly cold.   I knew that exposure was a risk but allI could do is to keep on.  Ironically climbing up hills was OK, it was the juddering descent on still slippy paths to Lynmouth which was the worse.

For the last hour it was also pitch black and I could barely see in front of me.  By the time I made the road I was shivering constantly and knew when I made the car I had to strip off the wet clothes and don yesterdays quickly.  If anyone in Lynmouth was offended by a near naked walker then I don't apologise – none of you came out to help!   I got in the car took two neurofen and pumped up the heating.   I also drank the liquids foolishly left earlier.   After half an hour I decided I could make it back.  My ankle was OK so I could manage the clutch as long as the knee did not move.  Most of the journey was on the motorway anyway so three hours later I made it back.  To add indignity to injury and slipped again on the steps to the back door and only a very hot bath restored some feeling.  At the time of writing, after a sleepless night I don't know if planned events this week will  have to be cancelled or not.   I did learnt one thing however.  A winter's walk on this path has to be treated as a serious enterprise.  I need the equipment I only normally take onto the mountains.

You can work out the title for yourself …

I didn't take many pictures given the conditions, especially after the fall where I was focused on keeping the camera dry and personal survival.  I will redo the section one summer's evening! However what I did take is on flickr.

One response to “which o’erleaps itself”

A person through Portlock

Various things came together this weekend.  I had arranged a meeting with the owner of ...

Its all about the granularity

I did a lot of thinking on the walks this weekend, especially during the painful ...