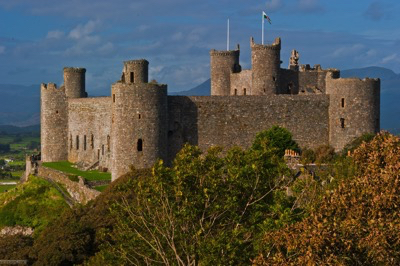 We are being rather inundated by memories of England winning the 1966 World Cup with the 50th anniversary falling yesterday. On that day I was embarking on a train to Llangollen at the age of 12 to take by first holiday sans family. A YHA walk between hostels through mid Wales to Harlech. We walked every day for about 5/6 hours and also used some buses. The first night the leader took us up Dinas Bran to test the fitness levels of his party. We then moved to Cynwyd, then Bala, then two nights in Dolgellau before finishing in Harlech. I was the youngest in the party with the rest being in the main 15 or 16 and with an all male party I had a hard time of it on occasions but I still have vivid and favourable memories of the walks and of talking with the leader. Also meeting people outside of school and street for the first time was interesting. I keep planning to redo that walk as I still have the maps I took. I marked the route and rest stops with Indian Ink so I can replicate the exact route without difficulty.

Now by coincidence I will be spending the next eight days walking from St Dogmaels to Harlech in the next section of my Round Wales Walk. I’ve done 34 days so far and passed the half way mark on the last leg somewhere on Cemaes Head. So the same end point, but differing start points. A similar level or trepidation however as this will be the first time I have really tested the knee since the accident on Tryfan. Weekly physic, daily exercises and anti inflammatories means I can now walk normally again, but I can’t stand on the cycle pedals without pain. Normally I would just knock this off and possibly do in five days what I now plan in six, but recovery cannot be rushed. I’m hoping to avoid an operation as stem cell treatments mature – I am bone on bone with both patellas which explains a lot. Fortunately I have built up the muscle to the point where it is an issue coming down hills or if I twist sideways but is otherwise no bother. I’m probably fitter than I was at age 12, but slightly more rickety.

So for the next eight days you will get walking blogs. I may start to fill in the first 34 that took me down the welsh border and around the South of Wales over the last couple of years. I plan to finish on March 1st 2017 if I can for many reasons that I will explain when I get there. But first I have to complete next week, Yomp around the Llyn and Anglesea before dragging myself along the North Wales coast which is OK in winter when I plan it. Then up the River Dee to its source before three days over the mountains to return to the coast at Barmouth or Harlech. More on that next week

In the health space?
Nina Abrahams
Be a part of the expanding Health and Care Programme at Cynefin! We are exploring theory, stories, methods, ethnography, insight into action, and more in all that is the complexity of health and care.  Whether you’re still questioning, have just started, or have a wealth of experience, there’s a space for you.  Virtual QuickStart For […]
Read More

Powerful distributed ethnography for a digital age
Jules Yim
Ethnography, the root of which is from the Greek ἔθνος ethnos meaning “folk, people, nation”, is widely practiced in anthropology, sociology and other social sciences that focus on human communication or the study of cultures. In a process known as participant observation, researchers embed themselves in the communities in at least some kind of marginal […]
Read More

“Protestants keep toasters in cupboards”
Dave Snowden
If you haven’t seen the glorious three series of Derry Girls then, if you do nothing else, watch this extract before reading further.  The Catholic girls are being forced into a peace and reconciliation process with the Protestant boys facilitated by a trendy priest and watched over by a cynical Nun (the best character in […]
Read More
1 2 3 … 1,072 Next »

so long as I get SOMEWHERE

I intended to complete these three posts linking ideas from Alice in Wonderland with the ...

The physicality of thought

For the last nine days I’ve been following this sign around the coast from St ...