Either the adrenaline search of my hoodie-avoidance behaviour of last night or the general state of exhaustion resulted in my finally resolving a few issues I had with the complex sub-domain model that I have been working on for some time.  Neither the original, or the dangerously phallic version really worked although they had all gone down well.  I had already decided that the template for the chaos sub-domain framework seemed the right way to go, but needed to work out the labels and also the dynamic shifts.  When I got back to the hotel room last night I flexed around with the slides and presented the model in the header picture (reproduced below in larger form) to the advanced class in London today.  It will probably flex a bit for the Seattle and Boston classes in a a few weeks time but I think its more or less there now.  All comments and criticism welcome by the way.

The main axes remain the same with the vertical representing the degree of consensus and the horizontal the level of coherence.  It is this latter axis by the way which is very different from the equivalent in Stacy's matrix.  But more on the differences and similarities with Stacy in a later post.  Remember, these are not strict categories although I have made it appear that way for ease of explanation.  In a sense this is about creating some recipes, which are fine as long as you remember when you need to bring in the Chef!

For the vertical axis I created three sections as follows:

On the horizontal axis I have combined the previous options into simpler phrases and removed the known-unknowns line.  So we now get:

I'm not 100% on those exact labels yet as group think is negative, but I don't see it as such to the right.  But for the moment its OK as a working model  Its also important to state that these are not rigid categories, they are a way of giving perspective on a more complex typology.

With that explanation complete we can look at the various sections in more detail.  I've done that with a slightly stylised heading picture to indicate the area being considered.  The boundaries are of course a lot fuzzier in practice.

The main dynamic is the diagonal line.  Taking some inspiration here from Ashby and Boisot who used this approach a lot.  The idea should be familiar to readers who have been following Cynefin for some time and is contained in the early papers from when I joined IBM, before I met Cynthia and others from IBM Research and started work on the DARPA projects pre and post 911.  When a new idea emerges it will be understood by a small group of believers and the evidence base will be necessarily weak.

As more work is done then evidence accumulates and more people buy into the idea.  Eventually there is a clear and near universal consensus, the evidence is there and we can shift from complex to complicated, moving from exploration to exploitation.  The reverse journey is also valid, changing, or recognising changes in context would trigger such a move.  Its also disruptive innovation in the Clay Christensen sense of the term.

There will be, as the green line indicates, high variation at the start of an idea than as its support and evidence base increases. 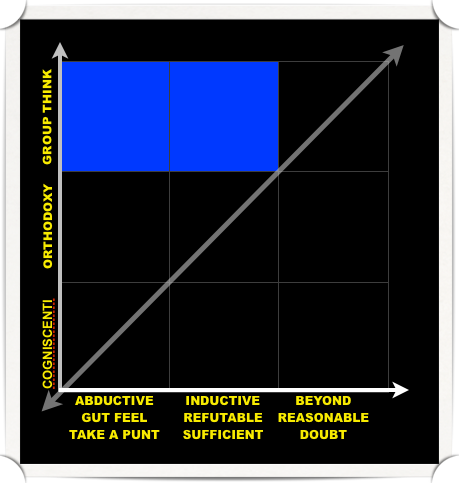 This occurs when we have high consensus with no evidence.  It can involve levels of complacency in past success which can blind people to weak signals, or even strong signals with clear evidence.  Too many  interpretative layers between raw data (such as customer response) and senior decision makes can also support this.   A fear culture in which dominant ideas cannot be challenged is all too common.  I remember a real problem in IBM was that new ideas had to go into a three year planning cycle to really get funding, unless you could get hidden in a rounding error which was one way innovation actually happened.  Over planning, lack of good feed back looks are all dangers here.

There is also the condition, towards the right of the model, where evidence is gathered through hypothesis based research based on assumptions which are already out of date.  I've seen a lot of that in marketing over the years where people knew what result was expected.   Its also behind game playing around evidence for things like Cognitive Behaviour Therapy (I can't find my blog on this some years ago to link I am afraid. 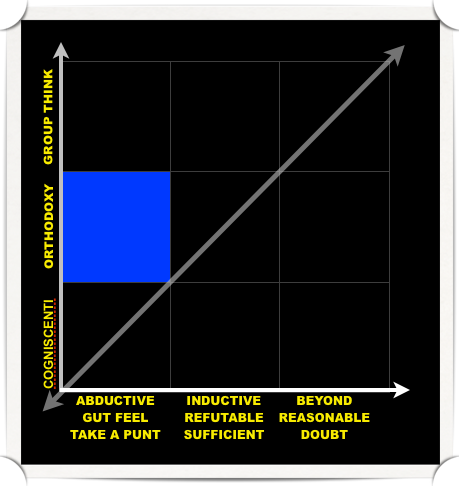 This is an early warning area.  If enthusiasm for an idea is growing faster than its evidence base it needs disruption which is not the same thing as destruction by the way!

Its one of the areas that executives need to watch as its too easy for people to latch onto to what the power brokers would like to be the case and seize of the flimsiest of evidence to support wider adoption.  In marketing overall it can be positive as a poor product (little evidence) can take off and dominate the market.  But nice as that may be it has its dangers even if it looks good.  In organisational and scanning terms it is aways dangerous when this starts to happen.  So breaking things up, pushing back, asking questions, engaging others are all legitimate management strategies here. 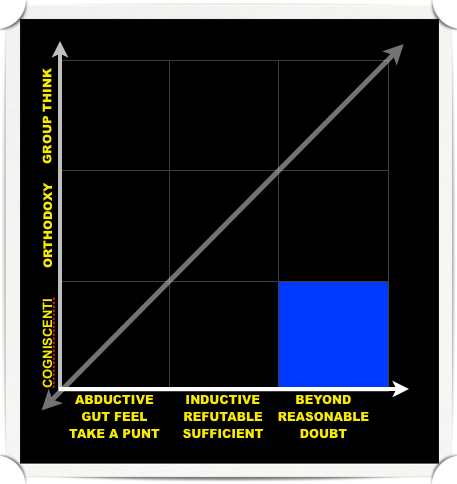 All to frequent is when a small group of people are aware that something is correct, but the idea goes against orthodoxy so there is no consensus.  Attempting to shift vertically (without assistance) is difficult if not impossible, but its also the normal strategy.  Telling people who don't want to believe that you are right that they are wrong is rarely a successful strategy and can easily end up with you metaphorically (these days) or in reality (the past) being burnt at the stake.

Now there are two dynamic strategies that can overcome this, and I will reorientate the icon to make it clear they are movements from this space. 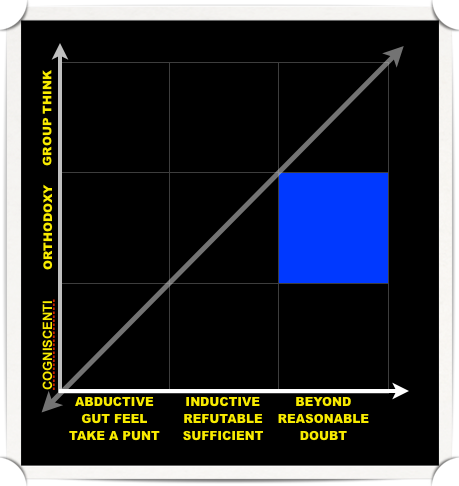 This assumes that someone with authority has some interest in the idea.  They don't necessarily have to buy into it, but they may respect it.  They may also believe, but know that the organisation as a whole will not accept it.

The solution here is create a safe space.  IBM did this when they created the PC.  Putting a group of people in Florida, free of normal controls to allow an idea to gestate and then prove itself in practice.  Formalising this can be a good idea, Again IBM did it in part with EBOs (Emergent Business Units) of which Cynefin was one.  But it failed as it was not a true sandpit.   Ideally having a formal process by which maverick ideas can be sandpited as part of a portfolio approach to innovation is one way to increase resilience. 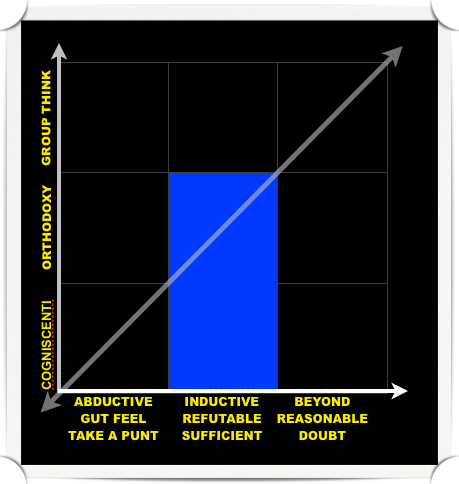 This is a different approach and it has a marking variant.  Here someone who is politically savvy, able to manage the organisation acts as a coach to the supporters of an idea.  Getting acceptance will involve compromise, possibly making changes to better fit the dominant ideas.  Often a simple change of language can help, or matching to some corporate goal.  I had people in IBM who did this for me and they were brilliant, but in the end it all got too hard!   The idea here is to return to the diagonal line in order to progress.

In product development and marketing this move is different.  Remember betamax and videotext?  Where two options have equal coherence, its more important to focus on market share (consensus) that to improve the product. 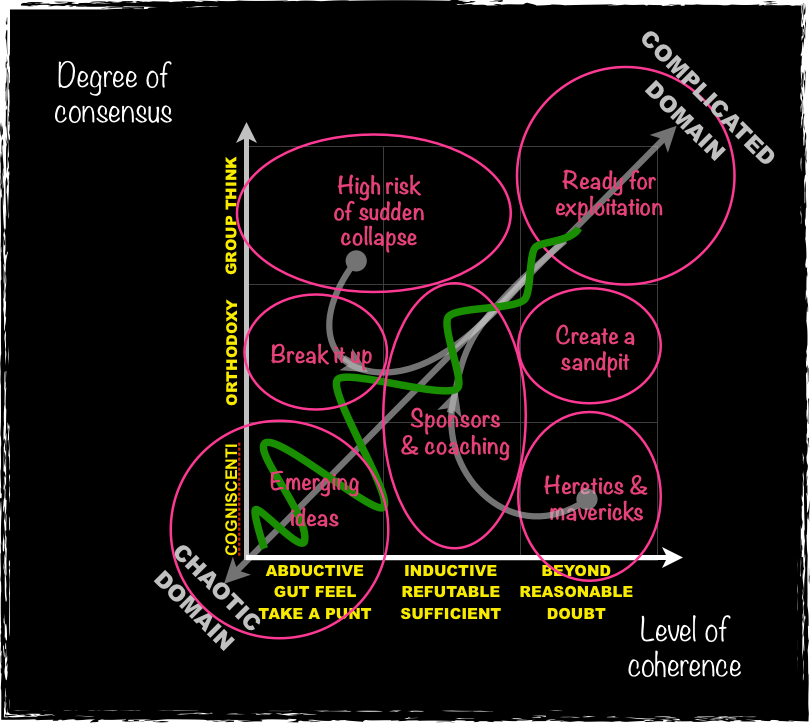 I left Calgary at the start of developing snow storm in another delayed flight; not ...

Some people do say the nicest things

The following is a Strategic Planning Assumption from a recently published Gartner report: By 2016, ...