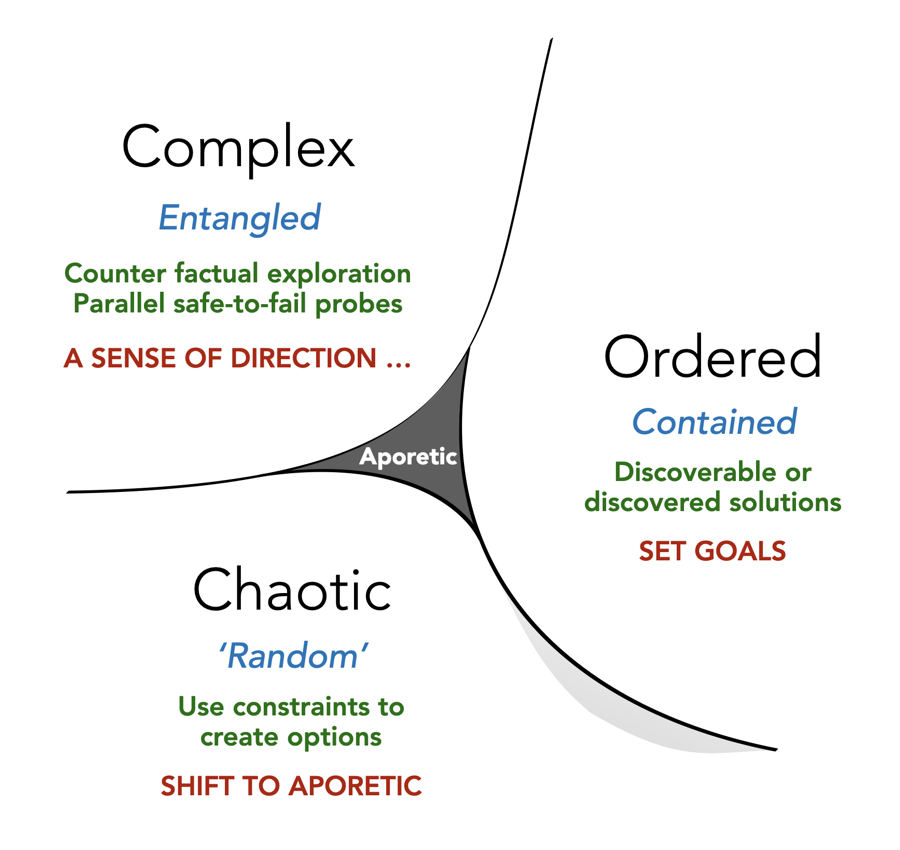 As is now the tradition I am using St David’s Day to provide the annual update on Cynefin.  Last year in a five-part series I introduced two changes, the renaming of Obvious to Clear and critically the central Aporetic/Confused domain replaced the idea of disorder.  I also started preliminary work on listing what can be managed and what can be monitored – something I will pick up later in the year.  The linked post connects you to the previous updates.  In many ways that series completed the development of Cynefin as, with the recognition of the aporetic, the final ambiguity was resolved; disorder was always problematic

Later that year I referenced the long-standing three-domain version of Cynefin and brought in the idea of the Triple Point and followed that up with a key post that put the various known, unknown and unknowable aspects into Cynefin domains and the liminal areas; this is the final image in the sequence below.  That post also created a sequence of the way that you build from the three-domain version, to full Cynefin and added in the recent three-dimensional version with trolls for which we plan to introduce T-Shirts shortly.  I’ve reproduced that below but with a different final image as indicated.  I promised to expand on the two posts but failed to do so but I plan to rectify that now and elaborate a bit on both previous references.

These days when I am asked to present Cynefin I do so in the following sequence:

I’ll generally finish by talking about the difference between complexity thinking and the dominant systems approach of the last few decades.  The latter sets goals and tries to close the gaps, the former focuses on describing the present and starting journeys with a sense of direction; which means you are open to novelty on the pathway.  That, in turn, allows me to use my favorite (and memorable from the social media streams that follow) illustration of this namely the Disney Movie Frozen II in which Anna, the true heroine of the movie, sings Do the Next Right Thing.  In academic language that is all about moving to the adjacent possible and then looking again.  In fact, the whole of that movie is a great illustration of complexity!

In the next post, I will talk about how we now create the Cynefin framework, and then in the final post look at common errors and explain the counter-factual label above.

The banner picture is of Castell y Gwynt on the summit of Glyder Fach with Yr Wydffa in the background to the left and Glyder Fawr to the right.  All three posts will have pictures of the walk from Capel Curig over the Glyders to Pen-y-Pass.  As a matter of policy by the way I am going to use the Welsh names of the mountains of my Cynefin rather than the Saxon and Norman ones.

Narrative enhanced practice 2 of 2
Dave Snowden
As promised I did try and get all of this into a process map last night while getting through the last three episodes of The English (worth watching and the linked review is a good summary).  One of the reasons for that is that the type of system I am describing pretty much exemplifies what I […]
Read More

Narrative enhanced practice 1 of 2
Dave Snowden
Yesterday in,  the space between exercises I was chatting with a research nurse about patient record keeping.  In the process of that discussion, we started to talk about effective communication about a patient’s condition and she made the point that a simple story can convey a lot of meaning, and that meaning is often lost […]
Read More

Landscapes of meaning
Dave Snowden
I’ve been feeling a little frustrated over the last ten days.  I spent the previous week in a holiday cottage in Eryri with some excursions to the Carneddau foothills only to be flattened by gale-force winds and saturated by driving rain and hail.  Since my return, the wind has dropped and the sky is clear […]
Read More
1 2 3 … 1,085 Next »

“…inspired by the Cynefin framework”

My weekend was disrupted, but in a good way and no it wasn’t that  Wales ...

As indicated in yesterday’s post I promised to talk today about the recommended way to ...