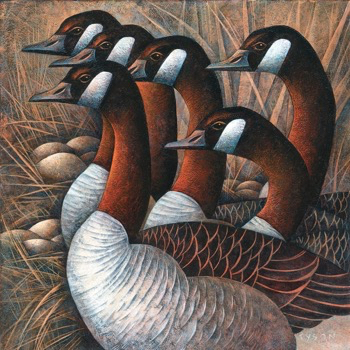 You know how images from some of those stories you read as a child never leave you? I have a persistent memory of an illustration from the story of geese saving ancient Rome from attack. Having spent most of yesterday in the Brecon Beacons I had my share of sheepdog equivalents, but when ever they come tapping up to the gate of a farm I remember those geese. I think the story relating to an attack by Goths; not the modern day variety who are far too languid to attack anything. The geese h.ard them coming and raised a racket, they were too quiet for the guards. The V formation of their flight is good illustration of rule based complexity (fly to the centre, match speed, avoid collision, change leadership on a time interval are the four although it is a little more complex than that). On the ground the collective noun is gaggle while in flight they are a skein. Wonderfully evocative and appropriate names. Emerging from the slow oven my Aga on New Year’s Day they are a delight and if you have not had the pleasure of scrambled goose egg you haven’t fully lived. Interestingly they are monogamous, but unusually only territorial during the brief mating season, thought to be the first domesticated fowl they are up there with dogs in the co-evolution of (wo)man and beast.

Then of course we have some wonderful phrases: Killing the goose that lays the golden eggs being one centre to this set of posts as well as Cognitive Edge’s forward strategy; What is source for the goose is sauce for the gander and then the wonderful idea of going on a Wild goose chase. Those three phrases will form the basic for today’s post.

The goose that lays golden eggs

The general meaning of a very old story is of short term thinking resulting in the destruction of a long term asset. One interpretation of the original Aesop’s fable has the farmer/farmer’s wife assuming that there is gold in that there goose so killing it will give direct access to the desired substance. All versions take the view that greed can over reach itself.

17th Century version is worth quoting in full:

A good Woman had a Hen that laid her every day an Egg. Now she fansy’d to her self, that upon a larger Allowance of Corn, this Hen might be brought in time to lay twice a day. She try’d the Experiment; but the Hen grew fat upon’t, and gave quite over laying.

It is worth saying up front that there is reverse meaning possible. One reason whole organisations go under is that the money they are making from golden eggs in the short term prevents them from seeing that the egg market is about to be transformed. Think of Kodak who invented digital photography but were making too much money out of film to make the shift. Often in the pharmaceutical sector money being made from drugs means that side effects are swept under the table producing a catastrophic failure downstream, There the goose needs to be killed to reduce the dependency on eggs. But even then the overall them is that of greed.

A consequence of this for OD is to realise that the power of current revenue can act as a major inhibitor of accepting the need for change. It doesn’t how many times people read Clayton Christian on disruptive innovation they still can’t break the habit. Years ago I argued that past success entrained the inevitability of future failure and nothing I have learnt since gives me reason to change that. In general it is better to work around dominant groups than to challenge them head on. Create a space where something new and different can succeed or increase the evidence of its potential success, before challenging dominant order. The problem with the universal approaches to change that dominant consultancy led thinking is that it makes this very difficult if not impossible. So back to an earlier them of doing small things in the present rather than idealised design.

On the other hand with a more conventional interpretation of the story we come to the need for apprentice models of learning. One of the great nonsenses of the current day is the attempt by senior leaders to eliminate middle management positions that create the training ground for future senior leaders. The same applies right down the system. The engineering metaphor with its assumption of replacement parts failed to understand that a large part of knowledge is based on experience gathered and lessons gleaned over extended periods of time. One of the many times I said the wrong thing in IBM days (well the right thing but you know what I mean) as after Sam had declared a research goal in which senior leaders would make a decision, then the intelligent software would implement it without troublesome (my addition) people getting in the way. I said, and did so a little too publicly, that (i) it wouldn’t work and (ii) if it did it would be a disaster as it would mean an impoverished generation of leaders with inadequate experience. That wasn’t too bad but I should have resisted the temptation to add and it looks that is already harsh reality.

In both my negative and positive interpretation of the saying, and my suggested response there is a common theme. We are dealing with a highly complex landscape and we have to live and journey through that landscape. We can’t simply wipe it out and start again. The adjacent possible is a lot better than the distant promise of utopia a pursuit of which tends to by dystopian in practice.

What is sauce
for the goose is sauce for the gander 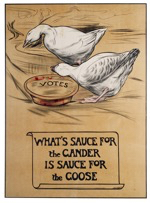 At first sight this saying may appear to exclude differentiated design which I have hinted at in previous posts and will elaborate in future ones. The point that I want to make here is one of the ethics of reciprocally within the workplace. These days we understand that female and male should be treated alike, that it is unfair to differential on grounds of race or the like. But the sense of being treated equally (or maybe not unequally) applies more generally. It is not just about what top executives want, no more is it about what ordinary workers will accept. Change is about balancing, or rather co-evolving the two. In doing that all voices need to be heard, which is not same thing as saying that all voices are equal or that any opinion is as good as another. So any change initiative needs to start with plotting the landscape of adjacent possibilities before we do too far with any design. In fact it should be in place and continuously monitoring so that change is continuous and sustainable rather that a series of discontinuous lurches which is all too common current practice.Another aspect of this is to make sure that all parties can provide feedback during the process of change. Yes in theory mechanisms are set up for consultation but that is dubious. For a start it restricts feedback to the consultative process and thus privileges the facilitator. Also the frequency is very different from that senior executives get into the process. The desire of too many OD teams to protect their leadership from anything disturbing is something I will return to in my penultimate post when we get to lords a leaping. Part of the problem is that the feedback is evaluative and too in your face in contrast with continuous feedback mechanisms that focus on description en mass, something we do with SenseMaker®. Setting those systems up along with the use of archetypes to allow indirect feedback are all essential architectural features of change. You don’t wait until the crisis of engagement is upon you before you engage. But the means of engagement must recognise the realities of power.

We’re all going on a wild goose chase

In researching this I found that in Shakespeare this meant a chase in which a lead horse was followed by others at a fixed distance (the V shape of flight) and this meant, to quote Nicholas Breton's in 1602: "Esteeme a horse, according to his pace, But loose no wagers on a wilde goose chase.” By the 19th Century Grose's Dictionary of the Vulgar Tongue, defines it as: "A tedious uncertain pursuit, like the following a flock of wild geese, who are remarkably shy."

Now both meanings have utility here. The orchestrated dance by which many an OD change initiative simply follows the latest fad-based orthodoxy is an example of a pointless pursuit (the common theme of both definitions). It is playing safe, rather like we used to say in the 80s No one gets fired for buying IBM we now could now say No one gets fired for calling in McKinseys & Co. Which is not to say that IBM did not make good kit, or that McKinsey is less than professional in its advice. Avoiding any chance of blame for failure sometimes seems more important to some OD professionals than making resilient change. We’ve seen that a few times in which the poverty of a survey instrument is accepted, but its what people expect so we will go with it anyway. My general response to that by the way is to do both. The better realise that is a good idea, the more political get worried as they realise they might say different things. Too many OD people want things to be far too neat, tidy and consistent for the organisations own good.

Equally if an organisation is resisting change, if the cynics dominate, then you need to ask some hard questions. Firstly remember that in general it is the cynics that care. They are still prepared to challenge even though they will be adversely labeled in consequence. The people you need to worry about are not the cynics - they are key early warning device, the geese that will save Rome -worry instead about the sycophants and pragmatists who either accept change regardless of consequence, or simply give surface agreement and find workarounds that sit beneath the radar.

So far I have studiously avoided the usurpation of the carol as a catechism memory ...