The landscape of narrative 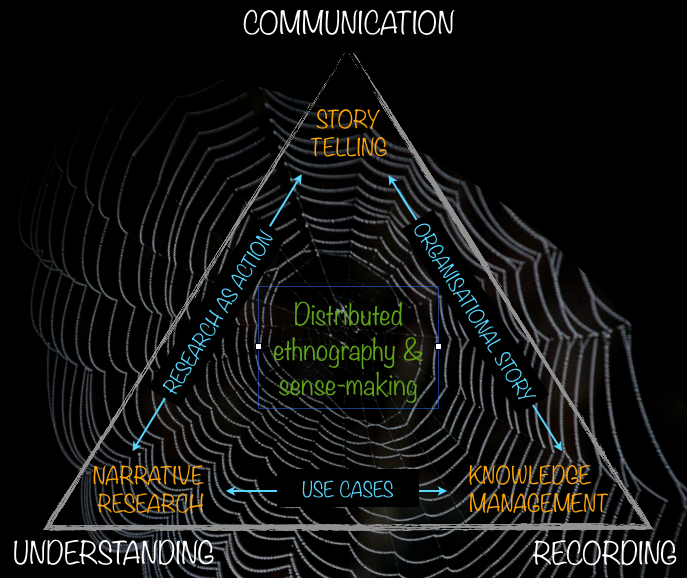 Back in 2014 I wrote the entry on organisational story telling for the Sage Handbook on Action Research. I wasn’t wild about the title at the time as I felt that was only one aspect of the field. However I got away with writing something more general in a limited word count and blogged some of my reflections at the time. As a part of that I produced a three way triangle to get a better understanding of the field and I’m going to assume familiarity with the basics of that in this post. If you are not familiar then use the link in the last sentence before proceeding! The essence of what I did then stands, although I indulged myself a little in creating a better image for this post and centred the triangle (something which is not in the Sage handbook) with distributed ethnography and sense-making (with a hyphen). The image of a spiders web in the background is intentional.

Now the context of my writing is my participation in an online ’summit’ which starts tomorrow and goes onto the end of the month. I was interviewed for it last week and I’m featured in week two One the edge of practice. A group that includes my former colleague and co-author Cynthia Kurtz and friends such as Victoria Ward. Agreements and disagreements will abound and my never knowingly uncontroversial heuristic is in play; the mature ones should be OK with that! It’s a free event but for a subscription you can have ongoing access to the material. A very broad range of speakers but with a notable absence of the key academics in the field: no Yiannis or Barbara or even (God help us) Boje. Looking through the facebook group I see I’ve already been labeled as iconoclastic which often means difficult or uncomfortable to deal with. So in that spirit I thought I would lay out some issues in advance.

The idea that (sorry about this guys) that It’s time for a new story falls foul of several of these. It represents the classic systems thinking error of defining how things should be based on some idealistic set of principles rather than dealing with the reality of how things are.

Now there is a lot more to come here and I expect to post through the period although how much I will be able to attend is uncertain. But I do want to address some specific issues here in the blog:

More will doubtless occur to me over the next few weeks but I thought I would lay a marker down. I’d also encourage anyone to take part in the event – and not just as recipients of the stories told.

Given I live in the UK and have a preference for One World I spend ...

The liminal nature of narrative

I’ve been delayed in getting this second post in the series of the role and ...