The process of strategy 3 of 3 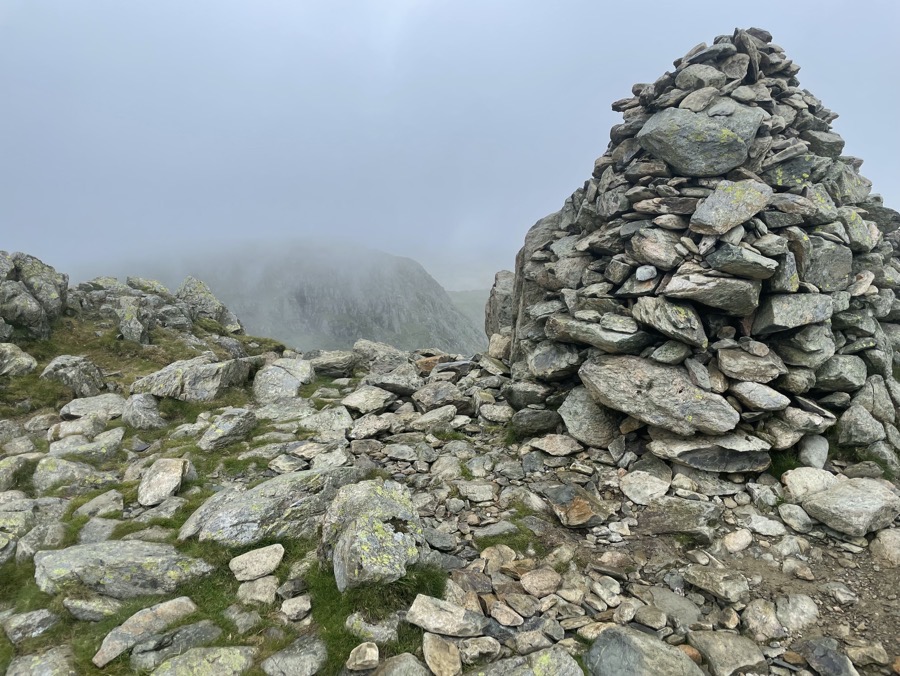 I’ve got into the habit of tweeting a summit picture from each Wainwright summit as a part of my challenge to complete all 214 in less than 40 days. For those interested, I’ve summarised the current status at the foot of this post.  I have a clear end date - my 68th birthday on the 1st April 2022, a constraint (no more than 40 days) but within that, I have buffer stock that can allow for weather and some injury.  Also on each day, I have exit options, target time to each summit and I’m constantly monitoring time, weather, ground conditions and the like and also scanning ahead. mentally identifying the paths ahead and markers for navigation.  I’ve been walking mountains since I was five and a lot of that is tacit, noticed while some explicit and if with others more of the latter less of the former.  One of the frequent questions (always from outside of the UK) is to enquire as to what the piles of stones that feature in nearly all the pictures are.  Now as any British walker will know these are cairns, key navigation aids built by previous travellers as navigation aids.  Sometimes there are prominent, as shown to the left on the summit of Swirl How on my Conniston Circuit last August.  The one in the banner picture marks the summit of High Hartsop Dodd but in some ways is more significant - it is the only pile of stones in the area.  I’ve lost count of the number of times I have navigated from cairn to cairn finding my way through clag (one of those evocative words whose sound indicates its meaning.  sinuous is another and in Welsh Ych-a-fi (uh-ch ah vee) which I pronounced vehemently tracking round the contour line from Middle Dodd to the col between Red Screes and Little Hart Crag as I plunged into mire thanking God for gaiters.

Now I’ve talked about maps and mapping a lot over the years and I started writing this blog the day after Simon Wardley’s Map Camp where he and I performed our now traditional fireside chat to close the event;  three times it's a tradition in these modern days.  More recently I talked about using the metaphor of charts as that entails a higher level of uncertainty.  In talking about the process of strategy we are talking about maps, and the use of maps to navigate a partially charted future.  I always loved the here be dragons and other strange beasts on medieval maps and most corporate strategy needs extensive use of that designation.

Now it’s taken a month to complete this post for two reasons.  In part that is due to the sheer pressure of work getting ready for renaming the company, the new website and the release of SenseMaker® Genba of which more next week.  But in the main, it was to my continuing the explore the idea.  The first two posts were easy to write, in particular, the second when I realised the significance of using the metaphor of an Estuary.  I now have various nautical charts on the floor of the office as I am working through new sense-making representations for SenseMaker®.  The best way to explore an idea is to teach it, or such is the case for me.  I can never understand why some academics don’t want to teach, it's when my best ideas are formed.  So I taught this at our Reading Masterclass and I’ve presented it three or four times a week through various keynotes to get my ideas straight.  I’ve ended up sorting out things to the point where I feel I can write something that will stand up to use.  It's also the third major framework (Cynefin and Flexuous Curves being the others) within the Cynefin pantheon.

As ever I am synthesising various materials from natural science and the humanities.  In this case, the core idea is from Deutsch and Marletto’s Constructor Theory.  The application of this to the process of strategy in organisations is revolutionary in nature if we combine it with existing work on constraints, human sensor networks and the like.  There is also an academic paper with me, John (University of North Texas) and Nigel (Flow consortium) as authors which is currently in peer review and a possible book next year with the same authors.  So several things are coming together here.  I’ve been playing around with this idea for over five years (I did the same with complexity theory before shifting Cynefin) and it's now coming together.  To be very clear Constructor Theory is not the same thing as Constructional Law, nor is it derived from it.  At its heart, the idea is very simple.  We start off by determining what isn’t possible (Counterfactuals) and then within that constraint identify constructors that can carry out a task repeatedly and consistently. In humans, ritual acts as a constructor in terms of cognitive activation, and a process can also work. Any change is a task (echos from scriptwriting, in the need for something to change for a new scene to be created) and the achievement of a task is dependent on the existence of a constructor.  Information (and thereby meaning ) thus emerges in the various relationships between impossible and possible tasks.  Now I’m not going to get involved in this as a theory in physics, but I am excited by what it allows us to do with strategy and critically the fractal fusion of strategy with tactics that are needed in managing complexity.  There were a few breakthrough’s as I presented it and I had an intuition that constraint mapping was a possible starting point.   Again constraint mapping was based on an original idea from Alicia Juarrero who is in no way responsible for what I have done with her work 🙂  Its also still under development and I am starting to realise (John Turner’s suggestion) that scaffolding may be a better language to use.   But more on that when the paper is published.

So the way I am now seeing things follows this sequence:

Now, this is a starting point.  I have some flow charts and other material that I will publish shortly.  I’m also looking at ideas of Buffer Stock and Time Boxes in the process.  I don’t expect everyone to get it, but this is an invitation to those who do, in whole or in part, to contribute.  Also, I’m publishing early before the normal plagiarism starts; I’m getting really fed up with people using my ideas without attribution, often by playing the game of going to my sources and claiming originality.  Develop and change my ideas by all means but acknowledge where you got them from. The most egregious example of late was someone who took an idea I had talked to them about over the last couple of years and then broadcast it claiming I was coming round to their point of view.  I’m more amused than irritated by it these days, but be aware, and beware!

By creating a few simple, but prominent markets (counterfactuals, constructors etc) we in effect create navigation aids, cairns (for the estuary marker buoys) that enable navigation.

More to come, including the interesting question of how we can use entanglement around points of coherence to reduce or negate path dependency in systems with human actors.

I completed day 28 on my last aborted true and High Hartsop Dodd (summit cairn in the banner picture) was number 149 in the quest which has involved 311 miles of walking and 88,674 ft of climbing achieved in just under 250 hours (less if you take out lunch and picture taking breaks).  If the weather had been good to me then I would have been completing the quest today on The Nab, which is also the first Wainwright I have climbed back in University Days.  But I got four days or torrential rain, a glorious fifth day but then limped over Little Hart Crag and down High Hartsop Dodd and Brothers Water to Hartsop and the car with an injured knee.  So on the plan  I now have nine days left but that might expand to ten as there is one challenging 15 miles, 5,337 ft that takes in Green Crag, Harter Fell, Hard Knott, Scafell and Slightside with the earlier sections containing a lot of peat bog so not the easiest of walking.  I’ve done that distance twice (Kentmire round plus Grey Crag) all the peaks to the South West of Ennerdale but those were on good paths and only involved 4,100 and 3,400 feet of climbing respectively so that may get split into two and another longish day with a drive between two pretty trackless and boggy circuits may have to be split as well.  But I’m going to do it with at least a day to spare from the target.

The process of strategy 2 of 3
Dave Snowden
Thanks to a sudden slip on greasy rock descending from Red Screes I’m home a couple of days early.  The absence of cartilage under both patellas, managed through kinesiology tape and strength and conditioning classes, means any fall or slip (and you can’t avoid them) can leave me with a week or more’s ibuprofen and […]
Read More

The process of strategy 1 of 3
Dave Snowden
This post follows on from the September series which looked at the whole issue of the learning organisation, and I have no intention of getting involved in the debates about who first created that term.  I’ll say now that one major error was that the idea of a learning organisation, which was the subtitle of […]
Read More
1 2 3 … 864 Next »