Things a leader can do 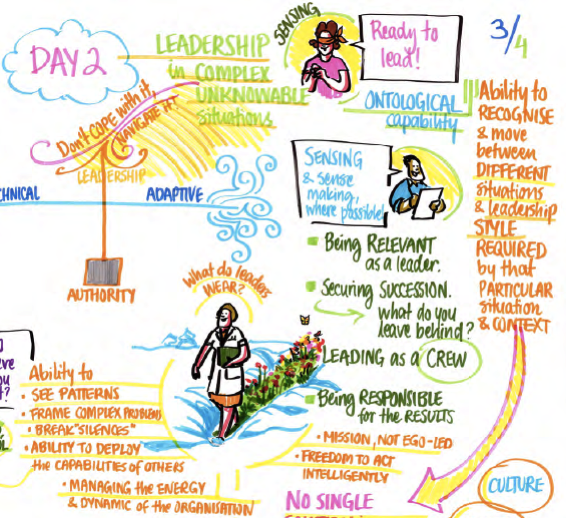 Just over a week ago I posted at the end of day one of the Helsinki think tank on Leadership. I planned to post the next day on one of the sessions I was involved in but events and travel overtook me. The email backlog is still high, the requirements of setting up the new Cynefin Centre at Bangor University while managing Cognitive Edge along with continued travel all conspired to prevent my resolution to get back to a daily cycle. Then of course the disaster that is Brexit has also impacted. I’ll be posting on that in the next few days as we will be launching a SenseMaker® project to try and identify some of the underlying cultural aspects that resulted in, and will result from that decision. I’m writing this en route to South Africa after a long drive down from Bangor where we did some of the planning for that. Before then I was in Lampeter at a Welsh Leadership conference which was well summed up by @lizgrieve as follows:

The hash tag will give you some more material from that presentation and it was filmed so I will try and post the link. But I will summarise that as well in the next few days and post the slides. Shooting sacred cows is a long term goal, hobby and pleasure and a home audience makes that easy.

Enough of explaining why I have not posting and saying what I will post, let me get to the subject.

To get to the subject

I’ve extracted the visual summary by Annika Varjonen above but the basic task I was given was to summarise the situation faced by leaders and what they should do about it. Now I had been talking about a lot of this in several of the discussion groups but it was now time to summarise. So I share it here – mostly material I have posted on before but some new stuff and formulations. If it is a bit cryptic ask questions! I’ve listed it as a series of bullet points under two headings:

What can we do to help

OK some of this will be cryptic – it is a place holder, feel free to ask. There will be future posts.

Above all realise that you don’t reduce complexity or necessarily absorb it (although that Boisot distinction is useful), rather we navigate complexity without requiring full knowledge or expecting certainly.

I’ve been too long away from this blog for which apologies. An error of judgement ...

Shooting the Sacred Cows of OD

Yesterday I referenced a tweet from the Welsh Academy session at which I was a ...