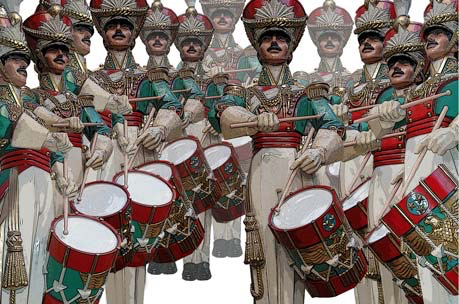 Any mention of drums brings to mind the truly great Ginger Baker and some fond memories of more youthful days. It also brings back some pretty terrible memories of school concerns over the years. The drum is one of those instruments whose simplicity requires sophistication in the drummer or it is simply noise. In terms of the symbolism I found a fun 2012 post by an Episcopalian priest written post-christmas in 2012. It includes a link to the debunking of the catechism interpretation. The Celtic version has nine drummers who apparently are snipe and (like virtually everything else in that interpretation) are linked to fertility. Now snipe are difficult to shoot but good to eat; there may be a metaphor in there somewhere but it will be tortuous to pull out. Father Tim does however give me a nice way to weave together the two competing interpretations with which I have opened every post in this series. His twelve day is:

the “drumming circle” used at the ill-fated “contemporary worship service”

That also brings back some truly embarrassing memories of my commune days which I am not going to share but it does allow me to introduce a major concern about much of OD practice, namely its quasi new age potential for abuse. An interesting article popped up on Facebook this morning talking about spiritual sexual predators which is relevant here. When I read it there wasn’t a single example given of male predation that I could not link to a direct or indirect experience of organisational change in companies I have worked in and with.

To be very very clear, I am not suggesting that all OD practitioners are sexual predators, or any for that matter. The point I am making is about the ease with which organisations are uncritically swept up in change initiatives supported by pseudo-scientific claims by consultants. I’ve been encountered in a few of those creatures and they are skilled (male and female alike by the way) in playing the manipulation game to put dissent in its place. I’ve got to the point where I kick back if anyone tries it on me. You know the way it works, you’ve made a point and the guru doesn’t like it, so they fix you with their eyes and come up with some platitudinous statement about how s/he feels about the way you are behaving. The feeling is theirs and you are not meant to challenge it. A lovely quote from the referenced article here.

The Very, Very Sensitive New Age Guy: This man has feelings. His feelings are very strong. You must never hurt his feelings, though he is free to hurt yours. He is a master of using psycho-babble and “non-violent communication”. You make him feel a certain way — he is never responsible for controlling his own feelings.

There are early warning signs of this type of behaviour by the way. I’ve found an superficial use of Heidegger interpreted solely through the filter of being is one. The other is the request for silence before the person speaks, the false humility that always heralds manipulation. Readers can probably come up with their own examples.

So to conclude these posts I’ll suggest five clear questions to ask before you start a change intuitive of any size:

So that is it, twelve (well fourteen with the build up) posts to get me back in the habit of daily blogging. I hope it was useful.

We are probably still in the party theme section of the carol and destined to ...

I’m still in an OD mindset after the last twelve days of posting and there ...