Avoiding the dangers of a single story with SenseMaker®

During the SenseMaker® day at the Practitioner Foundations course I delivered in Toronto with Terry Miller, I decided to open with Chimamanda Adichie's: The danger of a single story TED talk.  This is the second time I started this optional training day with this video with the other time being last year in Singapore when Aiden Choles and I were teaching.  Both times it seems to have had a good effect at introducing one of the key benefits of SenseMaker® which is harnessing the value of the diversity of thousands of stories while avoiding the dangerous biases of focusing only on a few, or to the point of the talk, a single dominant narrative.

One of the things that the talk does not cover indepth is the issue of stories always being at best only a partial representation of the deeper meaning known to the story tellers, or better yet the people who lived the experiences conveyed by the stories.  As many of us know one of the principles we talk about at CE when referring to knowledge is that, “we will always know more than we can say and we will always say more than we can write down.”  Using a metaphor that often gets overused but in this case is very applicable, the content of a transcribed story is like the tip of an iceberg. 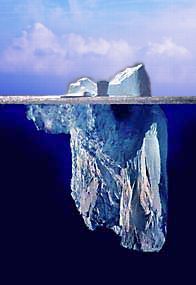 If we take what lies under the water line to represent the deeper meaning and detailed context related to the story as it was told or written then we need to engage more deeply in the person or perspective that has a greater awareness of what is actually beneath the waterline.  It is precisely this deeper insight that SenseMaker® seeks to illuminate across large population samples. The challenge with commonly applied approaches is that they attempt to ascribe meaning from what is visible as the tip of the iceberg or at best use biases of predominant myths and reinforced “single stories” to infer what is beneath the waterline across many iceberg tips.  Buy engaging the distributed cognition of a large population across many stories and experiences one gets far closer to reality that permits more effective sense-making for decision support.

Extending the metaphor then for navigating the complexities of an organization's culture, a market response to a product, service, or ad campaign, or a population's landscape of attitudes and beliefs is akin to navigating a ship through a maze of icebergs… however only assessing the risk and/or opportunity from what's above the surface is a very dangerous thing!

Take the time to watch Chimamanda Adichie's TED talk… it's moving, entertaining, and very informative on the dangers of the single story.

I gave an opening address last Friday at ScanAgile 2012 on the general subject of ...

On the eve of a Grand Slam match against the French (I will be there, ...