Today was one of those very long days, mitigated, nay transformed by good conversation.  I had to get up at 0400 to make the 0700 flight to Belfast for a day working on HR offerings using SenseMaker® (watch this space) with one of our most experienced practitioners and a good friend since my leaving of IBM days Anne McMurray and Anne Phillipson of PWC currently seconded to Queens University Belfast.  I pushed my luck as ever but it worked.  The bus to the termini arrived as I parked the car and I walked through security and to the gate arriving just as boarding commenced.  Given I would not get back until midnight and in the knowledge of a flight to the USA tomorrow I had maximised by sleep time.

So to set the context was tired.   I'd been ill the previous week, got well enough for daughter's graduation and managed two substantial walks over the weekend.  But the quality of intelligent conversations always overcomes weariness.  Also I don't think (well I know I can't) its possible to design a new service without conversation.  As we talked we realised that there were synergies between our plans for 360º feedback and other work on cultural audits.   I have a long standing hatred of any HR instrument which assumes an ideal model or general applicability of any model or models.  Most HR people have overcome the first, they to a degree, recognise that there is no one single model of leadership.  However they have not yet managed to move away from general recipes into a more contextual and fractal awareness of what leadership is all about.

Most meaning in complexity (to quote Juarrero) exists in the gaps between things, not in the things themselves.   Leadership will always be contextual to time, space and interactions.  That means any feedback tool (and that is what a 360º is) should be designed to provide fragmented historical understanding of how you and your colleagues are perceived in different contexts.  That increases the number of patterns available to you for decision making in the future.  This of course is at the heart of any lessons learning process.  Its not about a prescriptive recipe but it is about making more experiences both direct and various available to the decision maker so they can blend those memories with the current situation to come up with a course of action.

Now a narrative based nbsp;360º should be able to provide that and also avoid the gaming involved in normal approaches, especially if we move to continuous capture with rapid feedback that is both reactive and proactive in nature..   That is all I am saying for the moment, at least until we are ready to launch.  One thing which became clear is that a cultural audit of the organisations (again using narrative) would be a good way to set the context before moving into direct feedback.  Organisational and market culture are a critical aspect of setting the context in which we can understand the nature of situational assessment and decision making which are the two essential tasks of leaders.

As discussion progressed I was explaining how the signifiers in SenseMaker® add meaning, they don't simply interpret the narrative which they are indexing.  I then realised (something I had not articulated before) that the telling of the narrative situates the story teller before they signify.  It creates context that increases meaning at the point of interpretation.   Its one of the reasons why you don't worry if many respondents withhold the actual narrative or make it accessible only with permission (something of key importance to an un-gamable 360º); you know that the act of telling has increasing the significance (sic) of the signifiers.  This type of story telling is what the greeks called&nnbspdiegesis where you hear the internal voice of the narrator.  Its normally contrasted with mimesis which shows rather than tells, by means of action of the actors.  To gain that internal voice is key to understanding the patterns of the narrative itself, more so than the words of the story. It means we have to at least move if not remove the actors mask (see opening picture). 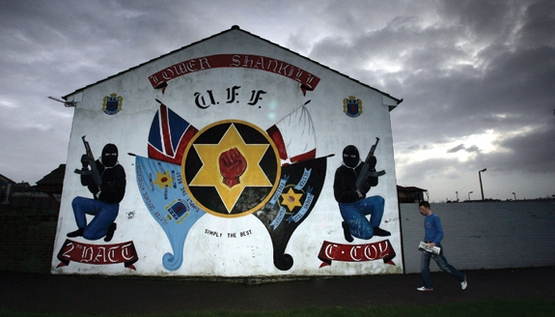 I got a bit carried away with marketing slogans as well.  I must resist the temptation to use an ear at every water cooler its much too 1984!  At the end of the session Anne drove me through the backstreets of Belfast to City Airport.  The street art, mostly sectarian in nature is a harsh reminder of the dangers of dominant narratives.  I had a harder reminder of this first thing.  I had given Anne's address to the taxi driver and as she lives in a protestant area he assumed I must be too.  He launched in to a well intentioned set of bonding stories in which the word Taig occurred a couple of times.  I kept my mouth shut and redirected to conversation to bereavement (the first opportunity that presented itself).  Some narratives remain too near the surface for comfort.

It never rains but it pours

Looking back there are far too many personal blogs here,  I promise something more serious ...