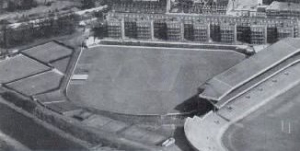 Down to Cardiff this morning for a two workshop which will define a series of SenseMaker® projects for the health sector.  We are holding it in the SWALEC stadium which of of itself triggers memories.   Glamorgan Cricket Club used to play at what is now the Arms Park and I spend many days there watching them play visiting overseas teams.   I still have Wes Hall’s autograph somewhere.  Cardiff is a strange place for me, I regard it as home but I have only ever lived there for a few months back at the age of four.   We stayed in the family house after Dad had been prevented from setting up a new Veterinary practice in Thame by what can be only described as the establishment.  At that point he decided to join the Ministry and got assigned to Mold in Flintshire.   My mother was born and bred in Cardiff so we stayed at the family home.  I still remember her coming back having found a house and my insisting (as a earnest four year old) on walking with her to discuss the options.

Either way after that although I grew up in the North we went back to Cardiff several times a year and over the years, more so when I went to University, I increasingly regarded Cardiff as home.   After University I returned more frequently, then as my children came along I started taking them to the Arms Park where I have held a season ticket for many years.   With my mother’s death I bought a Debenture seat for the Millennium in memorial and have not missed a home match since.   The welsh word Hireath comes into play here.  It represents a wistful longing for the place of your belonging (Cynefin), a need and a desire to return, to be a part of that place.   Overtime I come to Cardiff I relax, I feel at home.

In many ways I grew up there.  My cousin Peter was the same age as my sister, my cousin Michael much older so I was on my own a lot.  I spent time searching out fossils anytime I could get an adult to take me to Penarth.  Otherwise I went to the Museum and got to know the staff in the Geology section well.  Curiosity and mostly adult intellectual company are formative and it isn’t anything I regret.  So I never ever tire of returning home.

Good to have few choices

One of the interesting aspects of spending far too much time on planes is that ...

I ran a workshop today for several NHS groups in Leatherhead.  It was a basic ...