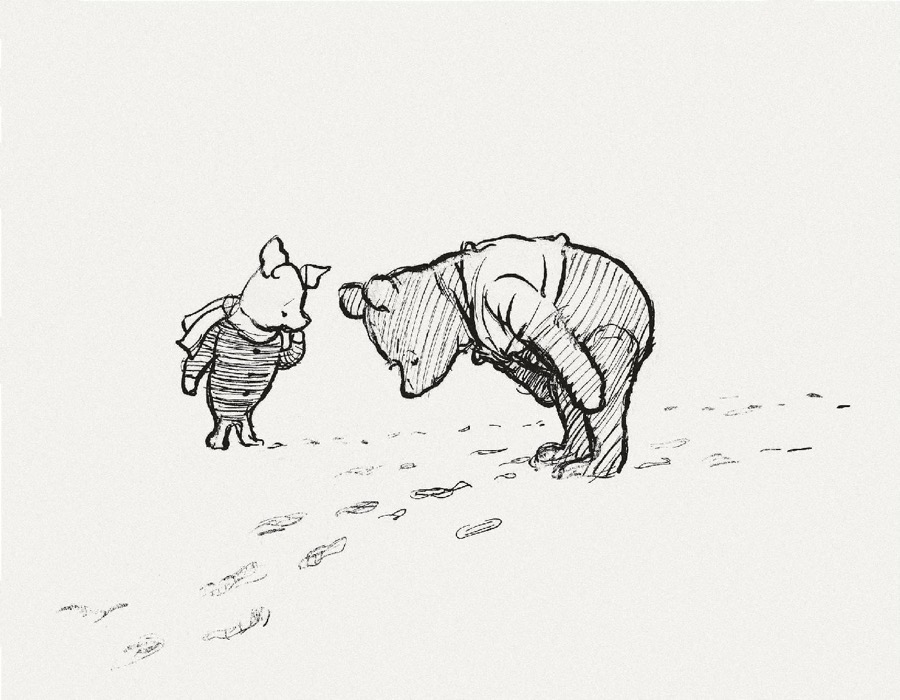 I talked yesterday about metaphor-based languages and used Winnie the Pooh as an illustration.  That was part of a loose set of posts starting to develop and codify a more general theory of leadership from a sense-making and anthro-complexity perspective.  One of the key components of that theory is the idea of communication through engagement.  Now that can involve the form of distributed sense-making envisaged in the Field Guide, but it can also involve engagement through the use of metaphors both common and also designed.  If you have a body of common narrative then it’s easy; most British children of my age will be very familiar with Winnie the Pooh and Wind in the Willows and that provides a rich being of complex references.  But you can also build a body of common stories and experiences that, with the addition of counterfactuals allow for effective communication of what in military circles is known as Commander’s Intent.  This is one of those well established military practices which had evolved to handle uncertainty and moving the approach over into Industry and Government, in general, is a lot better than trying to make leaders better communicators or better storytellers; both have utility but are neither sufficient nor necessary capabilities if you can get the wider process right.

As such languages develop then they can easily become a part of the language and the Woozle effect is one such example.  For those unfamiliar with the story, Piglet joins Winnie-the-Pooh who is walking around a group of larch trees and as they return to the starting point they see Pooh’s original track and come to the conclusion that it must be a strange beast called a Woozle so they follow it.  Returning to the start again they now see Piglets tracks and surmise the original Woozle has ow being joined by a companion (two sets of Pooh tracks) and a Wizzle (Piglet’s).  As they go round again the numbers multiple to the point where Piglet gets scared makes an excuse and runs home while Pooh has his error explained by Christoper Robin.

The phrase was then picked up in the 70s to reference a form of bias within the social sciences in which a false patter is identified, but then becomes, through multiple citations a form of un-checked truth.  It becomes something that cannot be questioned as the weight of authority behind the citations becomes irresistible.  You can see the same thing in internet tropes in which quotations, pictures, and so on go viral, fulfilling a need to be believed but without any truth.  it is oh so tempting to take a quotable quote and assume that it has an authentic origin.  It may be true, it may be a paraphrase, it may be false but people don’t check.  I was a thesis examiner a few years ago and I spotted an all too familiar reference to justify the sample size on a survey.   I’d seen it a few times but as I had an idle moment and was in the University Library I decided to track it down,  When I found it, it didn’t say that sample size x was sufficient, it said that the author in question had achieved that sample size and thought it was adequate for a specific purpose.  Someone had used that as an authority and someone else had copied that and so on to the point where it was received truth.  When I raised in the viva, one of the other examiners patronised me with don’t waste our time we all know that and when I showed the paper while he was disturbed he then muttered something about other sources confirming it.  When I asked for those I got told to stop making trouble.  It save the students blushes however.

This is a major problem in the social sciences given the need to scatter any paper with multiple references to give the impression of building on other knowledge.  My personal belief is that not many people read what they cite.   I was asked to write a paper for one knowledge management journal and they wanted a ‘name’ to sell the special edition.  I duly sent it back and they got some poor student to insert references every sentence or so and sent it to me for approval.  I protested that I had only read two of the scores of references but was told a certain density was the norm.  In the end, I withdrew the paper as in effect I was being asked to lie and the couple of sources I checked had obviously been found on a few keyword checks and were not relevant to what I had said.  At the moment my Complex Acts of Knowing is in the top ten cited papers in its field, I suspect a lot of those come from people searching on “complex + knowledge” not from people having read the paper.  I’ve seen a lot of this in what are largely self-referential fields in the social sciences. You challenge a basic assumption or merely suggest a difference and you receive patronising corrections that simply reference variations of what you have criticised. To heavy an investment in a restricted body of theory and practice can do that to people.

The number of references and citations in a book is inversely proportional to the amount of thinking the author has done.

Rumours spread in the same way and the saying never spoil a good story for the sake of the truth is scarily prevalent.  What is even scarier is that people will make a statement that they want to believe and come, through repetition to believe it is true. It’s a type of narcissism even if mostly mild and not pathological in form. Even presenting the facts as a counter is not enough.  In fact, it may well be used against you as you will be blamed for not listening to what people want to believe.  Now I am all for respect for other views but that is not without limitation. If someone wants to argue that the world was created in 4004 BC they deserve sympathy but I feel under no obligation to respect the position.  In contrast, in the same field, epigenetic is controversial but most approaches have coherence so to those you display respect even if you disagree.   But this isn’t just in science it is very common in day-to-day practice in both large and small organisations.  If the facts put you in a bad position make up a story about it as someone else’s fault, and if you craft it well so it matches the general perception of your target you may well get away with it.  The more the individual protests the facts the more they are seen as uncaring or unsympathetic.

So the idea of a fact-free society is not a new one; the internet, and social media have just exaggerated it.  Falling into a repeating pattern that supports an convenient falsehood is all too common in any organisation and has a centuries-old tradition.  Countering with facts can work, ignoring it sometimes works but you really have to find ways to either build a counter-narrative or retro-virus the original myth.   None of that is fun, but it is a key skill for leaders and this is a part of my recent theme that leadership is about enabling navigation rather than necessarily being the navigator.

Darmok and Jalad at Tanagra

You may be asking what connects the events on stardate 45047.2, the battlefield at Gettysburg ...

To curate or be curated?

From time to time someone, knowing my interest in narrative sends me a link to ...