Electra at the Old Vic 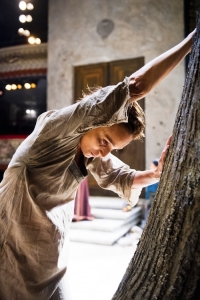 Excessive travel, even by my standards over the last two months have resulted in a neglect both of mountain walking and cultural events.  The former I hope to correct with some intensive sessions in the Brecon Beacons and Snowdonia over the next six weeks; I have a new ice axe to play with so the latter maybe a better focus than the former but that involves longer drives.   I really need to try and get another couple of sections of the Welsh Coast Path done but the days are too short for long distance work, so better the abruptness of height and the exhilaration of ridges.  I’m also going to be in Edinburgh for the new year and have negotiated one day for the mountains, still trying to work what is the best day trip from Edinburgh, possibly the Ochil Hills but all ideas are welcome.

In respect of culture I have ended up compressing one play and two operas into three successive nights.   The first of those was meant to be a family trip to see Electra at the National Theatre but ended up as a solitary visit from which I have just returned.  The excuses of the family in descending order of validity were:

A potential loss of £135 for three tickets was mitigated by the long queue of people waiting for returns I pleased to report that the tickets were not wasted, and the conversations I had with the two Chinese Students and one Middle Eastern woman who occupied the seats was some compensation.

The performance itself was worth making an effort for.  I’ve always loved Greek Theatre since my month introduced me to it at the Chester Gateway Theatre way back in the 70s.  It is pre-Christian which makes it nearly unique in the Western Tradition.  The rest of the Western tradition cannot escape the Christian legacy, whether it is the pious cant of the Wilmslow Boy or the glory of Brecht (pain and joy from school days in those examples).  It is also interesting that so much of the tradition has strong female characters in a society we tend to assume was innately Misogynist (in so far as that modern term has validity).  The basic plot of Electra illustrates the absence of an orthodox morality.  Electra is living in a form of self-exile in the home of her mother Clytemnestra now married to her Uncle Aegisthus.  While her sister Chrysothemis is compliant she is seeking revenge for her Mother’s murder (with an axe) of Agamemnon.  That murder was in consequence of Agamemnon’s sacrifice of Electra’s sister Iphigenia to secure the support of the Gods for the Troy Incursion.  Ultimately her brother Orestes will return to murder his mother and father in law.  So father sacrifices daughter, wife slays husband, daughter defends father, son kills mother and evil power usurping uncle all without visible guilt, more a sense of inevitable flow.

It is a play which is dominated by the character of Electra (as is the opera of the same name).  Kristin Scott Thomas was the big name attempting to fill Peggy Ashcroft’s shoes and she did it in part.  At times the intensity of her performance was overwhelming.  She staggered around the stage clutching the supposed ashes of her brother within her womb while maintaining a tempo of anger and pathos which I will not forget in a hurry.  But at other times she was petulant and did not allow some of the deeper aspects of her character to emerge.   In contrast Liz White as Chrysothemis, Diana Quick as Clytemnestra and Peter Wright as the Servant were impeccable is shorter but inch perfect portrayals of the moral ambiguity which is at the heart of the play.

The opening and close were comic in a good and a bad way.  Matthew Darcy, understudy for Orestes came on to ask us to switch off mobile phones but managed to fool us into thinking there was a cast change before he regretted that Jack Lowden (playing Orestes) was all too healthy.  He left us all wishing he had a chance to play the role, something confirmed by the somewhat wooden performance of the character in the play.   The second moment was more depressing in that Aegisthus was portrayed as a comic fool with so sense of threat.  That I want to forget.   So now to bed and tomorrow it is the glory of Wagner at the ROH with Tristan/

The first work of Philosophy I read was Plato's Symposium at the tender age of ...

I've always had an intensive dislike of saccharine approaches to anything in life, closely followed by a ...