As readers of the blog will have realised I managed a fair number of walks this Christmas and today was my last outing before work and travel bring me back to earth.  I drove down to Exmoor last night through floods and tempest torn conditions to stay at the Culbone Inn for a couple of nights.  I had a business meeting with Tony (owner of said Inn) today in the evening so I had determined to do another section of the South West Coastal Path while I was down.   With the Round Wales walk taking priority completion of this will probably have to wait until 2014 but no harm in ticking off the section from Lynmouth to Combe Martin.  It would mean a taxi back to the starting point unless I made especial good time and was prepared for a three hour bus journey but for a good day that would be worth it.

Now the last time I did a section of this long distance path I got caught up in a landslip so the memories as I drove into Lynmouth were interesting.  The last time I was in this particular car park I was in the early stages of exposure.  Now as it happened that accident was no bad thing.  It took me to the Doctor, then a reference for a scan and the tangential diagnosis of diabetes.  Without that I might have carried on in my obese state and being too late to reverse the whole thing.  Either way this time I was both better equipped and also fitter.   My obsessional nature on long distance walks was with me at the start and I backtracked to where I had left the path in pitch darkness to take the road back to the car.  That added about half an hour but it was worth it both for completeness and the views of Lynmouth, and I had also added an hour between getting the contact lens in and having a breakfast meeting. 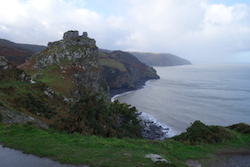 Then it was a hard near vertical track up by the cliff railway (closed so no temptation) before an airy path through the Valley of the Rocks.  Too good a path in a way but with the rain easing off and the promise of blue skies it was a great start.

Now a coastal path is very different from a mountain walk, it may appear not to be that strenuous but this walk involved over 5,000 feet of climbing overall as the profile (which opens this post) shows!  I had done the first, now dropping down to Lee Bay I for read for the second with a very muddy extension to Brock Bay.  The view was somewhat obscured by a farmer burning what seemed to be a small forest and this section was either road or slippery mud but again the views and freshness of the atmosphere were compensation.   However I now realised that I had forgotten to bring anything to eat, something that would affect me later as I have fewer reserves!

Part of the track above Woody Bay was closed due to landslips so that kept me alert as I started what must be one of the great coast trackways.  From Woody Bay and around Heddon’s Mouth involved some incredible scenery, muddy cliff top paths that needed caution and the steepest climb of the day to Peter’s Rock. 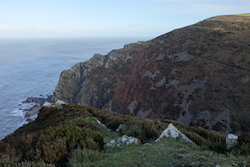 I resisted the temptation to divert to the Hunter’s Inn but I confess I did think about it.  The picture to the left shows a retrospective from Peter Rock showing the path I had come down earlier and an idea of the height.

From here it was an airy walk along the cliff top with the odd diversion to observe a party of city ramblers rescuing a sheep before the final steep climb to Great Hangman, the highest point of the whole path.  By this time the lack of any nourishment of any kind other than water was starting to hit me and dusk was approaching.   However from here the path was clear and fairly level before dropping into Combe Martin where I found a sandwich and pint of milk of necessary and urgent reward.   Now I had to find a pub which was difficult and order a taxi which was easy.  However the price of that ease was helping stack sandbags as a storm was forecast for the evening and with high tide they expected problems.

After than additional labour, rewarded by a satisfactory pint a half hour taxi ride took me back to the Inn.  A great conversation with the taxi driver who had been a chippie who came down from Birmingham to build some chalets and stayed on, doing some of the work on the Culbone Inn as it happened.   He had now set up a taxi business and was coping with five daughters (I thought one was hard enough).  Either way a good end to the walk and then a quick return for a shower and then to a meeting and good conversation; more on that tomorrow.

… and to start a new one

I had an aspiration this morning to take a picture like that which opens this ...

The “it works for me” argument

I've encountered this argument a few times over the year.  Most recently last night in ...