My last version of the chaotic domain model also went through significant change at the Seattle event, over and above the 45º rotation.  Now while complicated stepped up to order as it takes more energy to progress to hight levels, I have shown chaos as stepping down to complex.  The reason for this is that chaos is hard to maintain, you either collapse completely (more later) or some form of constraint starts to come into play and you are dealing with the complex.   So for the moment its step from complex, to complicated and then to Simple but a step down from Chaotic to Complex and a catastrophic collapse from Simple to Chaotic.  The idea here is to provide a visual clue as to transitions and differences.  Far too many people just treat chaos as another space, in fact it is very different.

Hopefully that will become a little clearer when I post the 'cylinder' tomorrow I think (unless I decide to do complex and simple first but they have not changed greatly).  For the moment the new model is a little complicated but remember you are seeing the end point of a presentation at the moment.  I am assuming both prior knowledge and prior explanation. So here it is: 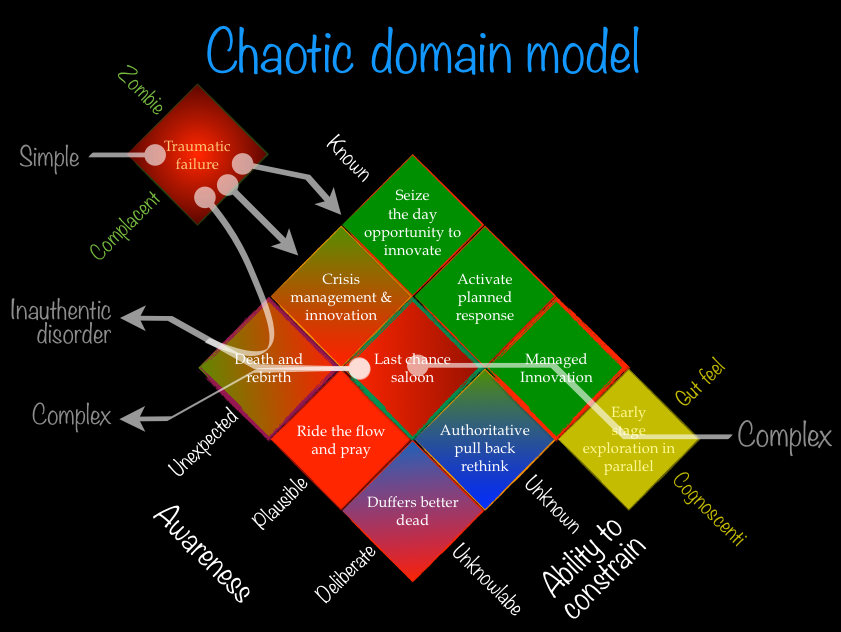 The first and most obvious change to the earlier version change in labels for old vertical one is still about constraints but I have got rid of the impose word and per the suggestion of the Seattle group shifted the labels to known, unknown and unknowable.  That helps with some other work I am doing as well.  Of course as you move from known to unknowable the need to impose constraint and assert control increases until, at the end, there is no point.  The old horizontal labels stay the same.   Otherwise the names of the boxes stay similar.

The other big change is to recognise that there are two possible exits from death and rebirth. One, the return to complex assumes that there is an early recognition of the inevitability and rather than hanging on for grim death the opportunity is taken to create something new on a micro or a macro basis.  On the other hand, hanging on means a likely collapse into inauthentic disorder from which there is no return.

This also allows three different types of collapse from Simple which makes life a little more elegant in model terms, always a good sign.   The colour coding remains red for warning, blue for management action, green for use it, there could be something good here.  That will apply to all domain models but I am not sure it is 100% right yet; that also applies to the words.  I expect to do more and they will be shown in full on day two of the next Cognitive Edge accreditation course in London and discussed in the evening with those with the sense to get their accommodation bookings in fast!

One response to “Chaotic domain v45º”

The last day of the meterological summer and my original plan was to spend the ...

It is a truth universally acknowledged, that any iPod or Car Music collection will have ...