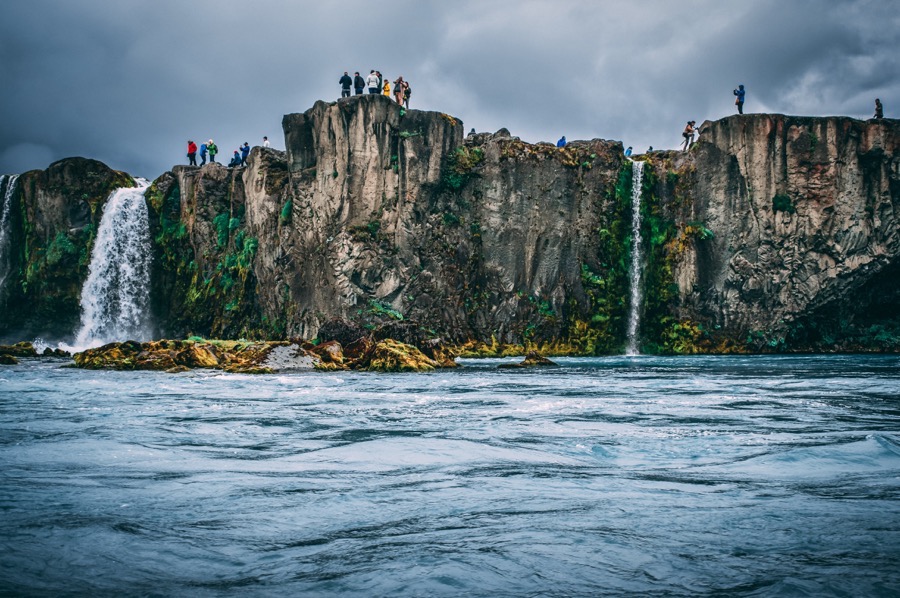 The introduction of the liminal version of Cynefin was probably the most significant change in recent years.  One of the reasons I used it was a difficulty people had in seeing that Cynefin had two classification systems: domains and dynamics.  By creating the liminal zones I managed to make dynamics a domain and that has made it easier for people to use.  It took a few iterations to get it right but when I managed it as a single stroke of the pen I was happy and there was the added bonus of finally resolving some issues around the domain of disorder.

Liminality as a concept is all about standing on a threshold (literal translation of the Latin origin namely limen) between states.  It carries with it a sense of ambiguity and uncertainty, possibly fear or trepidation before commitment.  In anthropology it is used to describe the point in a ritual where the actor stands between what they were and what they will become.

It is important to emphases this concept of a threshold.  Key to Cynefin is the idea that three ontological states or order, complexity and chaos are subject to phase shift boundaries.  Think here of latent heat; if I heat up water to 100ºC it doesn’t immediately become steam I have to continue to apply heat before this happens.  When water becomes ice it drops to 0ºC but then more heat has to be thrown out before the transition happens.  I’ll develop the idea of energy gradients more later in this post.  My use of phases shifts is a key difference with others such as Glenda Eoyang and Ralph Stacy who see the differences as a gradient.  Ralph also sees the differences as only about perception while I see the differences as being about reality, knowledge and perception (there I think Glenda and I agree).  Now I think the idea of phase shifts is more authentic to the mathematics, but even if it wasn’t then creating a phase shift boundary is essential to human sense-making.  Give us a gradient and we settle where we are most comfortable, create a boundary and we can behave differently on the other side.  It’s why ritual is so important in human society, it allows for change to be triggered in a sustainable and scalable way.  We dress differently for different events and we think and feel differently in consequence.  Crews in the emergency services have strong ritual acts to change identity in order that the interacting team can be effective and so on.

Its why I choose the image of a group of people standing on top of a cliff.   The shift between order and chaos is shown as a catastrophic fold as you walk over the cliff in mist without realising what you have done until it too late.   If you are choosing to change states and that involves climbing a gradient – making an energy commitment, the longer you can spend checking this is the right thing to do, and if it is, what is the easiest pathway, the better.  The domain shifts between the ordered and complex domains and between those of complexity and chaos are generally matters of choice and with choice come consequences. 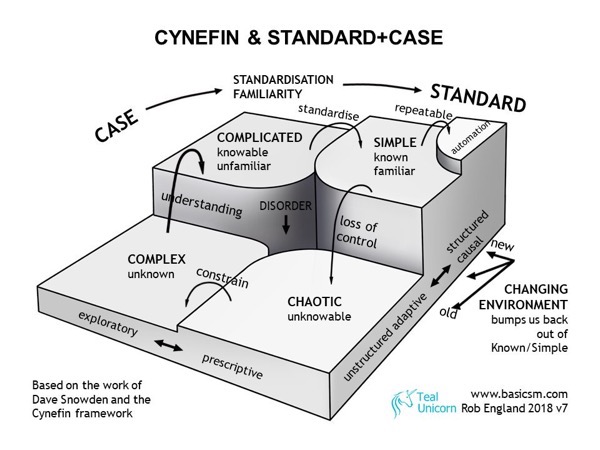 On the right I’ve produced a version of Cynefin created bu Rob England.   His first version showed chaotic as a lower level than complex but be changed that after I pinged him.   Along with the planar view of Cynefin which introduced the catastrophic fold into the framework, this is one of several different representations of Cynefin along with the domain models (I am not linking as I intend to revise those in the near future to handle liminality).  Rob created this with a specific purpose and its adds automation to Obvious (Simple when he produced this) and I would make other changes.  But it is useful as it shows that effort is needed to shift to higher levels of order but little effort is needed for things to be complex – enabling constraints multiple interactions and fluid mess are a natural human condition after all!   I would reduce the size of the gap between complex and complicated and increase it between complicated and standard.   I might also represent liminality as a slope towards the left (but not to the right) which reduces the climb.

Now there are purists within the Cynefin fold who argue that physics states that chaotic is a lower energy state than complex and in their field they are correct.   But here we are talking about human systems and those are open not closed.  The nature of humans is that we create connections and constraints intuitively as well as deliberately and we do so very quickly.  To create a system with no effective constraints, a state of near randomness takes a lot of energy both in creation and to sustain the state.  Liminality allows us to create additional transitionary domains and I’ll be interested if Rob attempts to draw them and I may attempt it myself.   However for the purpose of this post I want to address the three liminal states within Cynefin.  If you want the visualisation look at the green areas in yesterday’s post.

The boundary between chaotic and obvious is not liminal as there is no transition it is sudden.  It is two way, but one way happens with greater ease.  Climbing back up the cliff is normally a mistake, easier to shift into the liminal domain with complexity and then start the cycle again – but I will deal with that when I map dynamics onto the liminal version of Cynefin tomorrow.

By the way – I suspect the exploration of liminality will generate a lot more ideas and posts over the next couple of years.

Inset picture is by Rudolf Kirchner and sourced from Pixels

Banner picture is the summit of Glyder Fawr ,the first peak on a long walk of the ridge from Pen-y-Pass to Capel Curig – I broke a rib on the next peak Glider Fach when I slipped on wet boss while boulder hopping.  I selected it to convey the sense of uncertainty and transition involved in liminality.

It's taken longer than I hoped but I now have the time to complete my ...

The introduction of liminality to Cynefin necessitated a slight rethinking of the main dynamics within ...