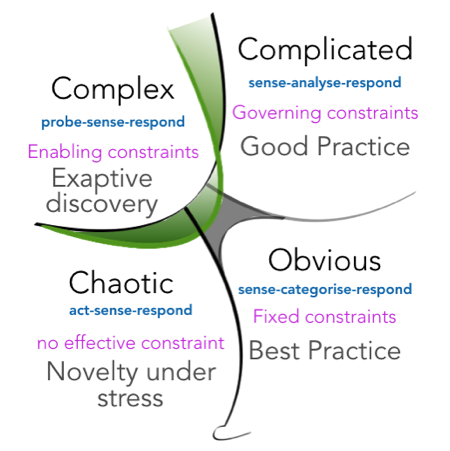 It’s taken longer than I hoped but I now have the time to complete my series of five update posts on Cynefin. In my last post I explained the change from ‘Simple’ to ‘Obvious’ in the ordered domain. In the post I want to look at the different types of practice or knowledge use in each domain and explain why I changed ‘Emergent Practice’ to ‘Exaptive discovery” in the complex domain and added the stress condition to Novely in the Chaotic Domain. If you look at this latest version of the framework I’ve also made the boundary between Obvious and Complicated a lighter shade of grey to indicate that this boundary, unlike the others is not a phase shift; its more of a gradient.

In the ordered domains there is a linear relationship between cause and effect, there is a right way (or a definable set of right ways) by which success can be achieved, or at least failure averted. The good and best practice distinction is important here. Best practice means there is only one way, and for that to apply not only must the relationship between cause and effect be self-evident to any reasonably person, but all such people must buy into the solution. For example in the UK and Australia we drive on the left hand side of the road, in Germany and the USA its the right. It would be a very unreasonably person who sought to vary that practice and there would, as they say, be consequences. But in the complicated domain the solutions are less clear. Here things are more loosely coupled, there are more degrees of freedom. In a community of experts, if you have the expertise and it is acknowledged by your peers then a degree of variation is permitted. One size doesn’t not fit all, but the right to vary practice is hard won and to a degree bounded by said peer review and peer acceptance. In both these cases there has been little change since the Cynefin Framework first appeared in something close to its current form.

In the complex domain I used to talk about practice being emergent, that is to say it will not be fully known or knowable in advance; understood only with the benefit of hindsight there is little one can do in planning. Its more about staying alert and exploiting patterns of possibilities as they start to become visible. However over the last year or so I have started to realise there is more we can do here. Exaptation is something I have blogged on before, most notably in this series of three posts back in 2012 (like 2019 a Grand Slam Year for Wales). In that series I also talked about managed serendipity. It is not just about responding to patterns, its about creating the conditions in which radical re-purposing is easier to stimulate and easy to recognise. There is a lot more to write here and some of that is for the book, but to optimise the conditions for serendipity you have to optimise (which generally means reduce) the granularity of your knowledge objects, increase the abstraction (SenseMaker® does this by design) through which you discover new ways of using things and radically change connectivity. The key on exaptation is to repurpose things in which you are already competent, so the learning or energy needs are reduced. IBM for example repurposed their expertise in punch card management to give them first mover advantage in the emerging field of computers many decades ago. So a major reason for the change was the realisation that we can do more to manage this space, its not just responsive.

So that indicates management possibilities; more about compliance in order, more about awareness and preparedness in unorder. Tomorrow I will move onto the liminal domains, what that means for disorder and also the link to energy gradients between domains.

Cognitive Edge, through the Cynefin Centre, is part of an exciting project team funded by ...

The introduction of the liminal version of Cynefin was probably the most significant change in ...