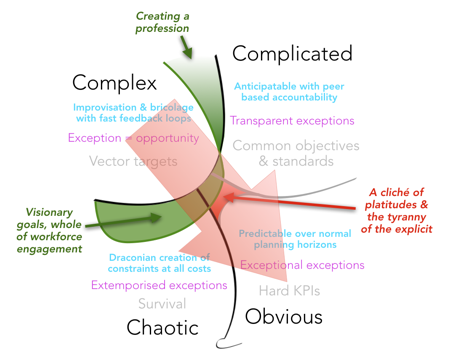 I was searching for my original known-unknown-unknowable matrix for today’s post and, as you do, came across a variation of Liminal Cynefin I used at and event to talk about the whole issue of control within organisations.   I think it was one of those slides that I put together at a conference where I am getting irritated with a preceding speaker who is either peddling snake oil and/or is fatally naive.  It was probably at an Agile conference as the large red arrow has SAFe and Six Sigma written on it; more on that later.  It’s why I like to tune into a conference before speaking and I’m generally changing and adding to the slides (or notes if I am going without slides) right up the point where I arrive on stage.  Either way it was interesting and available so  consider this a supplement to the St David’s series and I’ll get back to that tomorrow.

Again I am using Cynefin here in the context of what I long ago called the principle of Bounded Applicability; with some exceptions few things are wrong, most are right within boundaries.  To put it another way they are context specific not context free.   The question of what if anything is context free I’ll leave for another day as that one is still worrying me.  The great value of Cynefin is that it provides a quick way to understand, and more critically, apply that principle.   I always emphasis that Cynefin was designed as a conflict resolution framework as much as for understanding decision making – all aspects of sense-making.

So in this use of Cynefin I was looking at three such aspects and one major danger:

How we deal with exceptions, or deviance from the norm

So to the one major danger which is all to common; faced with complexity people don’t absorb it they try to eliminate it.  The fluidity of Agile is far too scary so we get SAFe, evolved practices are not explicit enough and BPR hasn’t worked all the time so we get Six Sigma and so on.  The premature codification of complex issues into neat and tidy solutions is a large consultancy disease and a fertile field for snake oil sales people and charlatans.  Most mission statements and (God help us) definitions of Mindset are little more than a collection of meaningless platitudes, the lowest common denominator of workshops based on keeping people happy rather than enabling learning.  There are better ways ….

Banner picture photo is by Aditya Siva on Unsplash you can work out the significance for yourself!

The introduction of liminality to Cynefin necessitated a slight rethinking of the main dynamics within ...

In my final post in this update series on Cynefin and I’m reserving the right ...