Dendrology with a twist

I'm settled into Cleveland Ohio for the rest of the week to speak at a conference tomorrow and to work on a broad range of health and well being projects.  You can expect to hear more on those over the next month or so and I hope to publish some SenseMaker® sites for people to play with in a day or so's time.  I'm staying in my favourite conference hotel, one of the very few which designs bedrooms for professionals and I am looking forward to meeting old friends and to interesting conversations.

Today was fairly relaxed, only two early morning conference calls and no need to set the alarm.  I had breakfast with Allie and Chris, our people on the ground for the project, set some tasks and arranged to meet in Starbucks in the afternoon to review action.  I had a half hope that Starbucks might finally have decided that Cleveland warranted a city mug but was disappointed yet again.  The policy is strange, Santa Fe doesn't have one either but ours is not to reason why.  I got the state mug which will have to do for now.

To come to the point of this post; the route to Starbucks involved navigating a population of 60,000 students who inhabit campus. Seeking some space I walked across The Oval which is a green park like area in the middle of campus.  For the record, despite the name, they do not play cricket, that level of civilisation has yet to be achieved and they have to get through the Rounders stage first.  A noticed some large signs by the trees as I entered and to my surprise 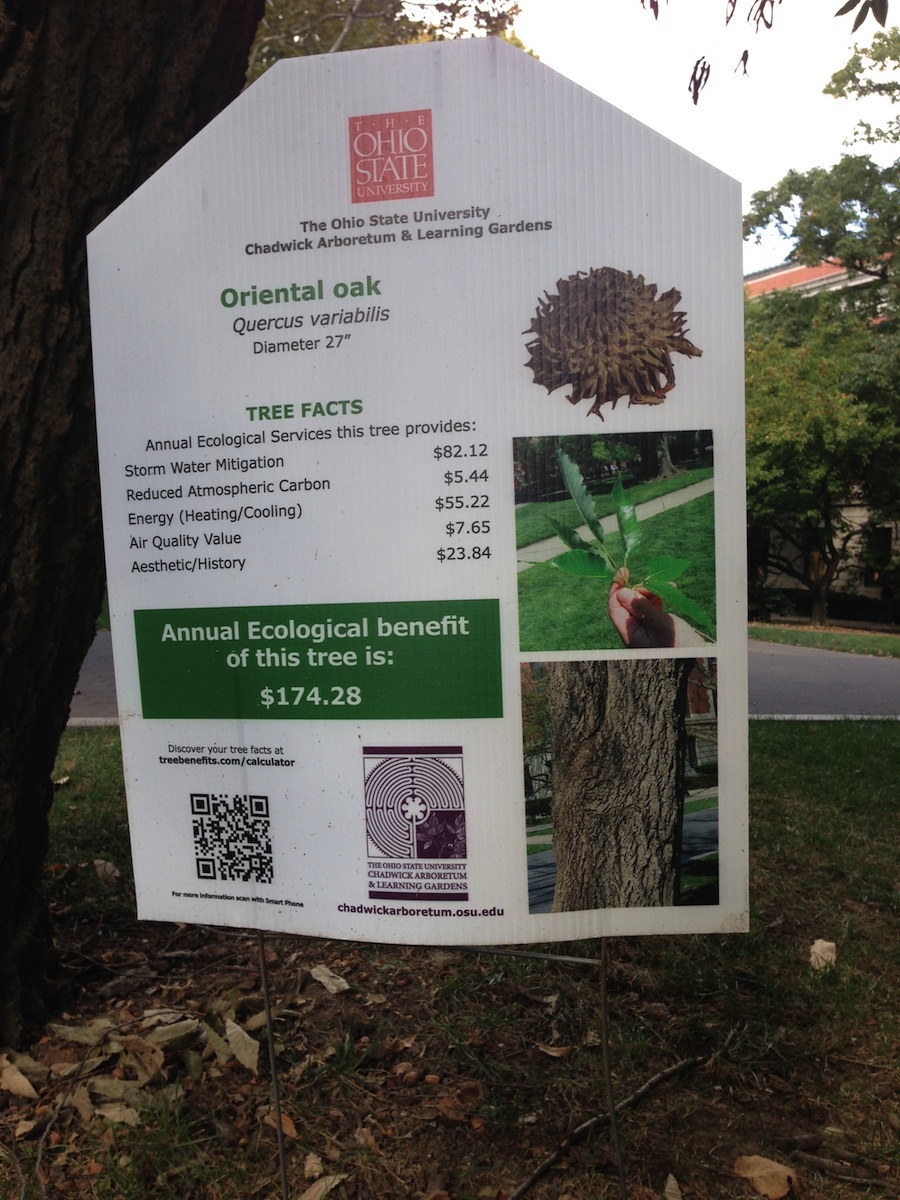 I came across a Hedge Maple and Oriental Oak that had monetary values assigned to their existence.

The Hedge Maple won out over the Oriental Oak which I am sure would be a source of continuing satisfaction to it.  Should space be needed for a new building then the $77.91 annual difference in value would give it much needed security.  In every other park I have ever visited if the trees have labels then the dendrology is more conventional.  It tells be about the tree, its nature associated insect life etc. etc.  I've never thought of assigning a monetary value to them and it is an interesting concept.

On the positive side it makes people aware of the ecological impact in terms that the economics department would find acceptable.  But there is also a worrying aspect to this which implies that value does not exist until it can be expressed in dollars and cents.  Of course the US is also the modern home of capitalism, as England was its initial magnifier.  It is also the first day of the US Government closing down due to a constitutional system unparalleled (meant literally and ironically) in the history of man.  Yesterday the park rangers erected barriers to stop tourists visiting Yosemite or any other national park.  So if I had wanted to see Redwoods I would not have been able to execute the need legally.

The cynical side of me also spoke from one shoulder (the one with the red gentleman carrying a pitchfork) to the effect that $250 did not represent any significant value, while a voice from the other shoulder suggested that something that old, that beautiful was worth far more, indeed I suggest $250 is a small price to pay for the shade alone.  It also reminded me of the desire to measure happiness in terms of money.  The original promissory notes evolved to facilitate trade but then we started to fetishise the object itself.  If the theory of Material Engagement is correct (more on that in future posts) and I think it is, then objects are part of our extended consciousness.  That starts to create an entrained pattern that is difficult to shift.  Maybe the next time I walk the Wye Valley all those beech trees will have pound signs on them?

I've always had a sort of love-hate relationships with big cities, in particular London and ...

So today was the big day here in Ohio.  I was the opening keynote and ...