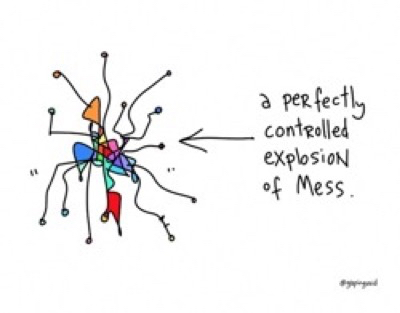 In my last post I asked the question Are we doomed to chaos? I planned to answer the question with a yes but yesterday but I ended up packing the day with a workshop helping people to find ways of avoiding such doom in terms with a client in South Africa, followed by a dash to the airport and two long economy flights to the UK. As it happened that delay worked well as the perfect Gaping Void cartoon for the post came in today and I also had some reflective time on the plane without the room to use the macbook to catch up on email!

Now this builds on my earlier posts on the nature of dynamics in Cynefin, in particular the one on triggering attention. In effect the forest cycle assumes that the organisation will become increasingly focused on efficiency to the point where it cannot survive shock. Now I think that is pretty much the default position and I can see whey people are attracted to the theory. However it can also be worrying fatalistic. One theory going the rounds in South Africa for example is that the country needs to go through a catastrophic failure before anything good can arise. Now that maybe, but the human cost is too high and if we understand the nature of the interactions then there are other options available to us.

In effect when we reach Trigger Point 2 (a ideally, b otherwise) we have to make a decision. Do we want to allow the increasing optimisation to continue in which case the overall ecology will become very stable? Or to put it another way, the product will be increasingly commoditised or the organisation will become increasingly bureaucratic. If we do then we need to be prepared to abandon it when the market shifts or a major threat comes into play. In Boston Matrix terms kill the Cash Cow when it starts to become a dog. That is a legitimate business strategy, but it is not universal (one problem with Anarchy) and in the case of society it is not desirable.

The solutions then (using a mixture of Cynefin Dynamics and the Forest Cycle) involve changing the nature of type of interactions. We can summarise them as follows:

Now that is not a full list, but it illustrates the way to go around solving problems from a complexity perspective. You could try and find a recipe from a popular management book, or get everyone together in a Kumbayah session imposing your pop psychology onto ordinary people while rambling on about de-humanisation, being and becoming and the like. All very satisfying for the facilitator but any positive effect is temporary at best. You don’t get far by tacking a complex problem directly. Instead you look at the evolutionary process that will lead to lock in and intervene to change species diversity, external stimulation etc. Multiple such attempts open up possibilities that could now have been known in advance.

I’ll develop this tomorrow in the typology of change initiatives I promised earlier on in my metamorphosis series.

Are we doomed to chaos?

One of the cases used in Embracing Complexity (see my post of yesterday) is a ...

Many moons ago I used to drive into work everyday from Lockeridge to Farnborough. It ...