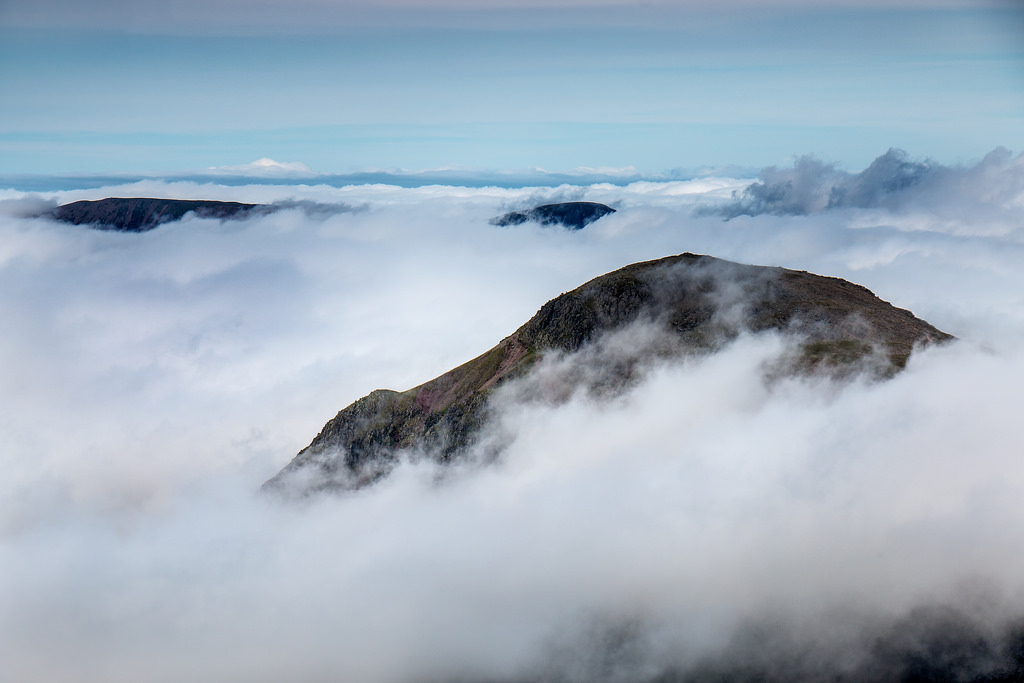 Many moons ago I used to drive into work everyday from Lockeridge to Farnborough. It took around an hour and a quarter but I was never bored with the first forty five minutes. That took me over the hill and into the Vale of Pewsey before climbing back up again and taking the country roads through to Luggershall. After that it got a bit tedious between the A303 and the M3 and the hazards were different. Approaching Luggershall you had a good chance of a much of Marines on exercise suddenly emerging from a wood and from time to time a tank would traverse the road in front of you. After Luggershall the dangers were from lane savers and unmarked police cars seeking to gain their morning quota of speeding fines. The real delight of the journey on a winters morning was the first view of the Vale of Pewsey from Adam’s Grave when the Vale was full of mist, but the sun was just rising over it. One of those experiences where late for work or not you have to stop, get out of the car and just stand and watch. I never got a photograph of that (something I must work at rectifying) so I borrowed one to illustrate this post.

The metaphor for organisational change is a simple one, from the high ground a pathway may be clear, but enter into the space, go from macro to micro and life’s pathways become more complex and confusing. Especially as there there’ll be no GPS around the water cooler. A slightly obscure reference there to Amos’s Well, I’ll tell ye, there’ll be no butter in hell! from the ever wonderful Cold Comfort Farm. Speaking of which, alot of Organisational Change practitioners remind me of Amos, Mr Mybug, Urk or Elfine; far too few of Robert Poste’s child or Mrs Beetle. There is a whole archetypal narrative set and a satirical book in there somewhere but I mustn’t let my self be diverted into whimsy. Especially as I had a specific Mr Mybug in mind with my side swipe at the misuse of psychology in yesterday’s post. 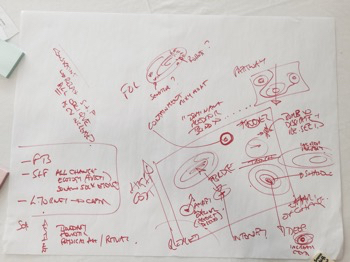 The landscape metaphor is pretty key to a lot of our SenseMaker® work and in relationship to cultural change it is key. By showing a dispositional state you allow people to explore the evolutionary potential of the present; you avoid the false promise of an idealised future. The other advantage is that contour maps are visualisations that most people get, and they predispose people to the idea of a journey not a static state. So I have been playing around with this for some months now, but it came together in a workshop in South Africa – thanks to Sonja for creating the opportunity and tolerating my ramblings with a felt tip pen on butcher paper. The result is shown to the right! I haven’t full decode it yet, but this is a list of possible interventions arising from the landscape. I’m going to be doing more work on this and will also get a designer involved as we formalise the method. It may be a little obscure at the moment (well it is, but it has to be really). So take this is a sort of brainstorm for comment, statement of landscape is followed by possible action in italics. I’m using attractor to indicate something that people fall into; the reverse is for the future

A lot more to come there, and I need to do more work and build cases from the existing narrative landscapes we have developed. But it is a start. To return to the opening metaphor, engaging with the reality within the mist is key, pretending you can both engage while maintaining the macro perspective is a mistake.

PS: I am sorry to have to say this, but bitter recent experience has shown that a lot of people cannot be trusted to contribute to a commons, or attribute material. So readers need to be aware that some aspects of this post are covered by Cognitive Edge’s US Patent 8,031,201 and/or are copyright © 2015 Cognitive Edge.

In my last post I asked the question Are we doomed to chaos? I planned ...

I was in Cardiff yesterday for one of those meaningless warm up matches that give ...