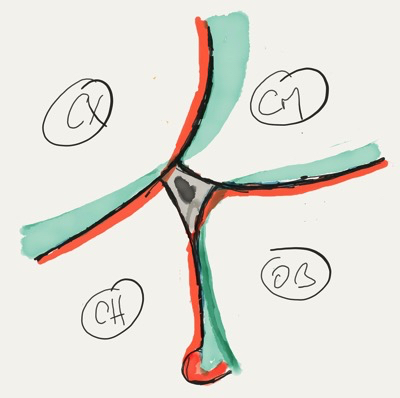 The Origins of Cynefin - Part 6

We’ve now reached the penultimate episode in this series (and don’t worry Dumbledore won’t die, this is not The Hero’s Journey). It will complete the key developments on the framework during the IBM period. Tomorrow I will talk about more recent changes and future directions. The illustration to the left shows all three aspects I want to talk about today namely the tetrahedrons, boundaries and dynamics. All of them are interlinked and all three are critical to understanding the sense-making, as opposed to the categorisation applications of Cynefin.

The model show represents the Dynamic Learning dynamic which appeared in one of the first Cynefin articles namely Complex Acts of Knowing although it is shown here with the addition of natural numbers in a more recent form. The point about this dynamic is that it shows that situations and actions flow within the Cynefin framework, they are not static, but as they move between the domains the nature of our mode of interaction changes.

That particular example relates to the way in which learning and knowledge creation happens in a company. Creation starts in the complex domain, largely in informal networks which often transgress the boundaries of the formal. When a body of knowledge becomes key to organisational performance the constraints on permitted variations are increased and the level of codification increases to allow diffusion over a wider group (this is the CoP space in KM). A sensible organisation will ensure that they create a cyclical pattern of destruction (a shallow but not deep dive into chaos) by relaxing all constraints, which returns people and materials to the complex domain. Only a small amount of stable material should transfer to the Simple or Known domain. I originally created that dynamic as an alternative per

The tetrahedrons as movement between domains

I’ve shown that particular dynamic as it allows me to talk about the key elements and the role of the tetrahedrons in allowing some codification of the principles of taste without creating a recipe (that metaphor again).

Interesting by the way that Cynthia rightly talks about two great tastes that taste great together when she talks about how her ideas on confluence came together with Cynefin. I will also confess (and as a penance I confessed at all Cognitive Edge training courses for over three years) that I didn’t initially understand the potential of her Seeing Eye model when it first came into play. I could see it had potential but I didn’t fully get it until I used it in practice well after the first article using it was published. I understood its true value when I realised that we could use it to allow people to generate their own contextual solutions, rather than bringing in one from outside (with all the cargo cult dangers that go with consulting).

So lets see how that works. If we look at that above dynamic just in terms of the tetrahedrons you will see what I mean, with the client we show the dynamic then go through the following stages using the tetrahedrons as a guide.

So what we do here is to show the pattern to the client, then ask how in their organisation they would break some connections and build others. In effect with have a handbook of tastes, but the way those tastes are used is contextual to the organisation itself.

Now there is more to Cynthia’s confluence model than that. You may also have noticed that I missed out on her description of chaos as isolation, undirected, incoherent. That is partly because the shift is a shallow dive not a deep dive. However more on that in my final post in this series tomorrow. I want to look at the confluence model in more detail then.

Of course that is not the only dynamic, I used it to illustrate the point and one of the values of the tetrahedrons. In our work with DARPA we identified a whole range of movements between the domains and I have pulled out the two illustrations to demonstrate them. Some of the names became more creative over time – collapse became the Masada gambit for example but they all stand to this day.

That said, the introduction of subdomains which was only really possible after we created the four points method for construction described yesterday, allowed more sophisticated representation. I#39;ve shown one of these to the left. In this case we are dealing with two alternative approaches to crisis management. The flow between chaos and simple in effect covers the collapse and imposition dynamics of the earlier model. The movement from chaos to complex to ordered on the other hand was earlier described as swarming. You will also see in this illustration the use of changes in the connections of the tetrahedrons to illustrate what is happening at each stage.

Now there are more that could be shown. The real point is that movement between domains, in effect crossing or breaking boundaries, is a very important aspect of sense-making using the Cynefin framework. It’s far from a simple categorisation model, it’s a framework for enabling a wider understanding of change in the organisation and critically the creation of a language of change within the organisation. It is also one that legitimizes many different approaches, to use language I am never comfortable with – its not a model, its a framework but really its a meta-model, a way of understanding models and approaches. More on that tomorrow.

Now the boundary issue is an important one, and if you check out the comments on yesterday’s blog you will see a different of perspective (I think not view) between myself and Cynthia. Jan Roodt added a wise comment there (which means I agree with him!):

Every system has a boundary. It may be porous, and indeed a complex system must have “ports” or “dendrites” to interact with the environment. Context is a function of boundaries. Personally I do not like gradients, because soon everything is relative (and nothing has position then) and when that happens anything goes and I do not get closer to solutions either. With ports and dendrites there is no crossing of boundaries, it is what helps the system interact and it can be truncated or extended or narrowed or widened in specific ways to allow for the process of experimentation, which is also core to sense-making.

The danger with boundaries is when people use them to exclude “the other”, to live within boundaries rather than to transcend them. The point of the Cynefin model is to allow people to live on both sides of the boundaries and to behave appropriately depending on context

Now in order to do that we need to have a more complex or nuanced view of boundaries. At one point Cynthia and I experimented with different physical models by way of a metaphor. We talked about broad rivers (you can cross anywhere but you know you have crossed as your feet are wet) and chasms (you have to build a bridge or go on a very long walk). We also talked about permiable, semi-permiable and porous boundaries. Of course the boundary between simple and chaotic is a cliff, you fall off it and recovery is costly. However all the other boundaries can be defined in different ways.

Interesting there was less success with that than the domains themselves. However I think that is time to bring those concepts back into play, so that is one for the future.

Right, we are now more or less up todate. Tomorrow I want to complete the picture and reflect on the future.

The Origins of Cynefin - Part 5

The Cynefin framework is frequently (and legitimately) used as a categorisation model around the four ...

The Origins of Cynefin - Part 7

It's time to bring this series of seven posts on the origins of Cynefin to ...