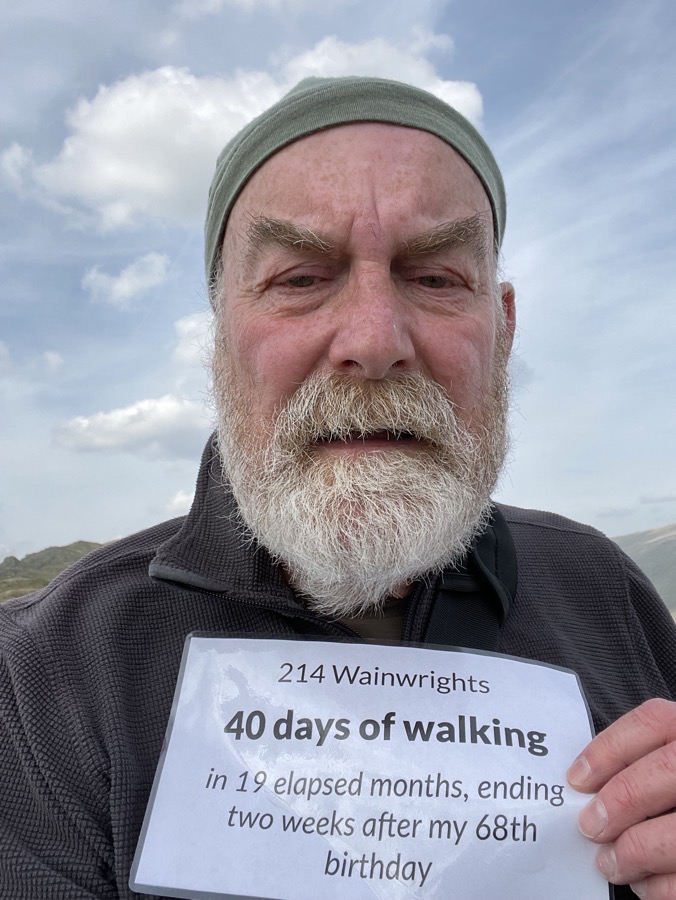 In my last post on the value of walking, and my Wainwright quest in particular, I was two days into what I hoped would be the final eight days of said quest and if achieved I would have made it in 39 days.  As things panned out the final set of walks were pretty heavy with two days over ten hours in length and one the best part of twelve hours and 4,531 feet of climbing.  The net result was I needed a few more rest days than I had planned for.  My penultimate day of the whole challenge involved a series of ascents with car journeys between each one taking in Hartsop How & Loughrigg Fell & Lingmoor Fell & Holme Fell & Black Fell.  While I was doing that I was also trying to work on one client project with the result that I ended up in a car park in Keswick for more than an hour on a call and simply ran of of time to do Black Fell in daylight.  As it happened I had climbed that in torrential rain in August last year, via Tarn Howes.  My rules allowed that to be taken out of the record but I decided to let it count.  There was a symmetry in this as my final planned day involved Wainwrights I had climbed previously so Holme Fell completed the collection overall.  The real frustration was that I ended up the stay one walk short of the record.  On the 30th I was committed to two client planning sessions the weather was bad anyway.  The 31st was perfect but I had to drive to Liverpool Airport for my first post-COVID flight.  Driving down the M6 with the sun dappled fells to my right was a form of torture.  But I did have a good memory of rediscovering by ability to scramble.  I had been looking to see if I could avoid Striding and Squirrel Edge given the state of my knees and some questions of balance at the age of 68.  But I couldn’t see a way round it so I headed off for what was a massive walk, starting with Striding Edge.  My plan was to use the track that bypasses the ridge, but when I got there my ego could not cope with that path, so I took to main ridge and managed it without effort.  The next day I ascended Squirrel Edge which if anything is harder; that opens up a lot more future possibilities.

Either way I couldn’t leave it there and luckily a B&B location at the start of my final walk (with parking) fell free at the last minute for the Easter weekend.  I persuaded my wife to join me (not for the walk, but for a meal in the evening)  and headed up on the Saturday via a few old haunts (we met and married at Lancaster University).  Sunday morning I was able to have a good breakfast (that really is an outstanding B&B by the way) and walk out from the door, through the grounds if Rydal Hall and hence up to my first fell of the day namely Low Pike.  I was doing the Fairfield Horseshoe which I have done several times before, but counter clockwise for the first time and with the addition of Stone Arthur.  You in effect get all the hard climbing over early.  I made the walk in less than eight hours which was good news and took the obligatory photograph on the top of Nab Scar which was the first Wainwright I ever climbed many decades ago.   For those who are interested the full spreadsheet is laid out below.  I was a little bit of an anti-climax but I started to think on the way down about the need to finish the South West Coastal Path – only nine days left on that but I have been doing it off and on over nine years and then a return to the Wainwrights to do them all again, but this time by different routes, over a longer timeframe and with some relaxation of the constraints.  To get them all in in 40 days involved an average walking day of just under 9 hours covering 11.3 miles with 3,345 feet of climb, often by less than ideal routes.   Next time round I plan, as far as possible to use new routes (that is the new constraint) but I’ll be happy to take in the same fell more than once.  And then there are the outlying fells which can also be collected.

I should acknowledge the various self-catering accommodations and pubs I’ve stayed in during the process of completing the challenge.  My now go to self-catering location I linked to in the last post and I will definitely return to Rydal Hall Lodge, but I should also call out the Wasdale Head Inn which is the best base of the delights of a delightful valley and the home of British Climbing,  Its worth staying there just for the terrifying pictures of Edwardian gentlemen in tweeds in the early days of rock climbing and the various collections of their equipment, boots and all.  I should also acknowledge Hatt Health & Movement Clinic.  Their podiatry and rehab saw me through the Diabetes reversal, and then the Strength & Conditional classes, Massage and Physio services have kept me going despite the absence of any cartilage under my knee caps.  Their recommendation of kinsinologytape  in particular transformed my ability to descend hills without pain.

The banner picture shows the Fairfield Horseshoe from Conniston Water.  A sentimental trip to day to see Wild-Cat Island and other remembrances of youth before driving home You see a lot of mountain shots in posts here, in part because I spent ...

For the last two weekends, I’ve been walking the moors above Merthyr Tydfil.  It is ...