It’s time to bring this series of posts to an end, but it is far from an end for the subject itself.  I started it after people referred to The future backwards (FB) as a backcasting technique but the range expanded somewhat.  That said I have largely confined myself to the timeline aspects of the more generic Foresight arena.   In this last post, I want to pull things together a bit and show how FB sits into a strategy process.  I should emphasis that this is only an application of the technique.  It also has high utility in lessons learned programmes, understanding different perspectives, etc. etc.  The process and description below, although it is focused on foresight may in modified form have application in other domains.

Now I should also apologise for what is going to be a somewhat complicated digram.  It is much easier to explain on a slide build, or if its drawn on the board.  However, neither approach is available for a blog post so you are going to have to take a deep breath and follow it through step by step!  Don’t worry about the whole picture until the end, and be nice by the way;  it took 3.5 hours on a flight from Singapore to Melbourne to put it together and at the moment as its creator I am sensitive!

So here goes.   I will start with the whole picture then describe the process step by step and finish with some general comments. 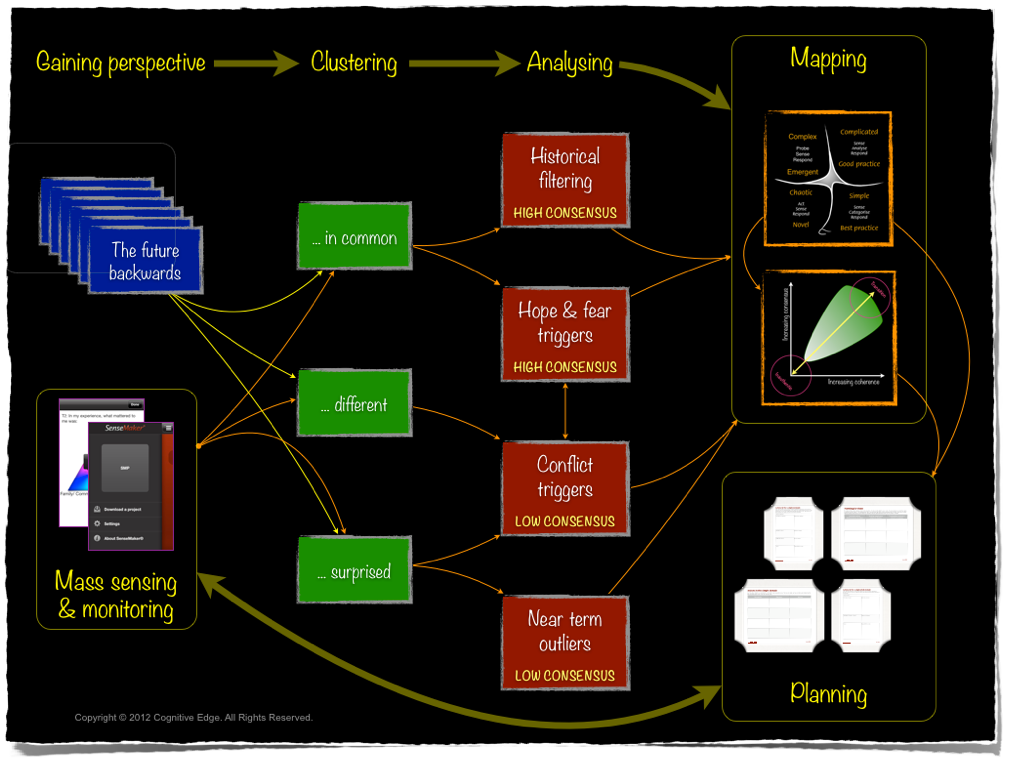 I am assuming some familiarity with FB as a technique here and assuming that the process has been run with multiple groups, ideally organised to maximise group think in each of the groups.  This does confuse people who have been trained to try and mix groups up, but in my experience, such a mistake is in error during initial sense-making.   By maximising group think you increase the number of perspectives as you encourage the development of extremes, and that increases scanning.  As a side here, I have often argued it was a mistake to collapse all the agencies into one post 9-11 as it encouraged a single view, rather than multiple perspectives.  Obviously, this is a balancing act: with too much diversity you get excessive fragmentation, too little and you lose adaptive capacity.  However for this exercise as want as much diversity as possible, we are trying to scan the range of all that is plausible, and that is a lot.

In a FB workshop exercise all the groups, once they are complete and not before, are rotated around all the other groups and are asked three questions about all the turning points created:

Using markers on the back of any turning point cluster (the front would bias the next group through) the facilitator takes notes.  Once the rounds are complete the results are clustered.   Now, this does not have to be a workshop, it can be the result of an analytic process  In any event we end up with four clusters from those three inputs. Namely:

You should have the essence of this by now and a lot of FB exercises stop here.   Its goal is to create contextual filters through which you can trigger people to various states of alert, by reminding them of past failures or potential future failures so that they dig deeper, scan more.  Of course, it doesn’t have to stop there.  FB can be a key input into a Cynefin contextualisation exercise providing the core data for a four points construction, described in my History of Cynefin article.  The consolidated results of FB also nicely feed into the new consensus-coherence framework referenced above.  All of that in turn shifts into planning with different types of action depending on the domain.

And, this is all part of a wider need for monitoring, scanning, and distributing cognition.  I show this returning to SenseMaker® in the picture, and his is probably the first site you will have had of the new app, which is in part designed for widespread scanning.  That however is for another day when I can also give readers a chance to experiment with said app.  Not far away, so watch this space.

The opening picture by the way is of a set of Salmon nets in an estuary; to overuse the metaphor, you can only scan part of the stream and they may escape anyway.

After due consideration, I've settled on sidecasting over the alternatives.  It has an edge to ...

I'm not a huge fan of De Bono but one quote from him is just ...