Following our saunter in Singapore the previous weekend Michael and I had planned to use the weekend in New Zealand for something more substantial in distance, and ideally less populated by poisonous creatures.   I had thought of Waiheke Island but Michael did the research and found a trail which was advertised as an undiscovered gem.  He also decided that it would be best at dawn given the weather forecast and tide tables.  Having returned late from the rugby I can't say I was greatly enamoured setting the alarm for 0330 but the planning was persuasive so I went along with it.  That said we almost missed rosy fingered dawn as she touched the wine dark sea.  One should never trust a native of North America with navigation, they are too assimilated to long straight roads laid out in grids.

However we made it and parked just after Matatūahu point before the 'pest' barrier and spent a long time on the pebble beach just taking pictures.  That is me in silhouette by the way.  The good thing about arriving early was that we could not drive 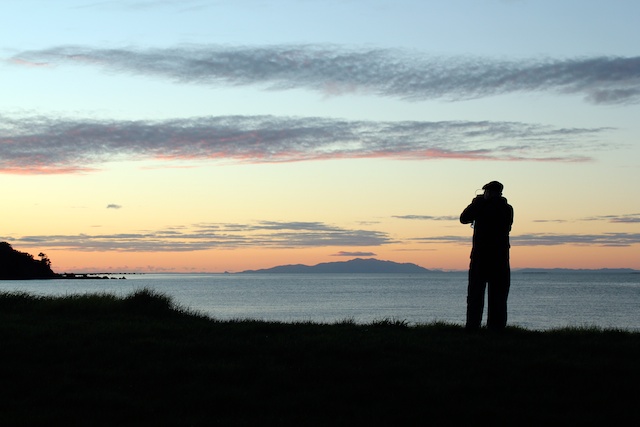 The good thing about arriving early was that we could not drive to the main car park.  That meant we had to walk park the lagoon which offered some of the most dramatic photographs (see mine which heads this article.  The full set is on flickr by the way.  From the Lagoon we took the South Coast track which rises steeply after crossing a causeway.  On another day I would be tempted, tides permitting to follow the shore.

It was the right choice, views opened up over the Hauraki Gulf to the Barrier Islands and the light remained incredible.  By the time we reached Māori Bay we were both agreed that this was one of the greatest walks either of us had been on.  We took the diversion (well to be honest we took every diversion) to Tokatū point, and via the loop track.  The view from the end with a low winter/spring light is one of my highlights of the day (see left). 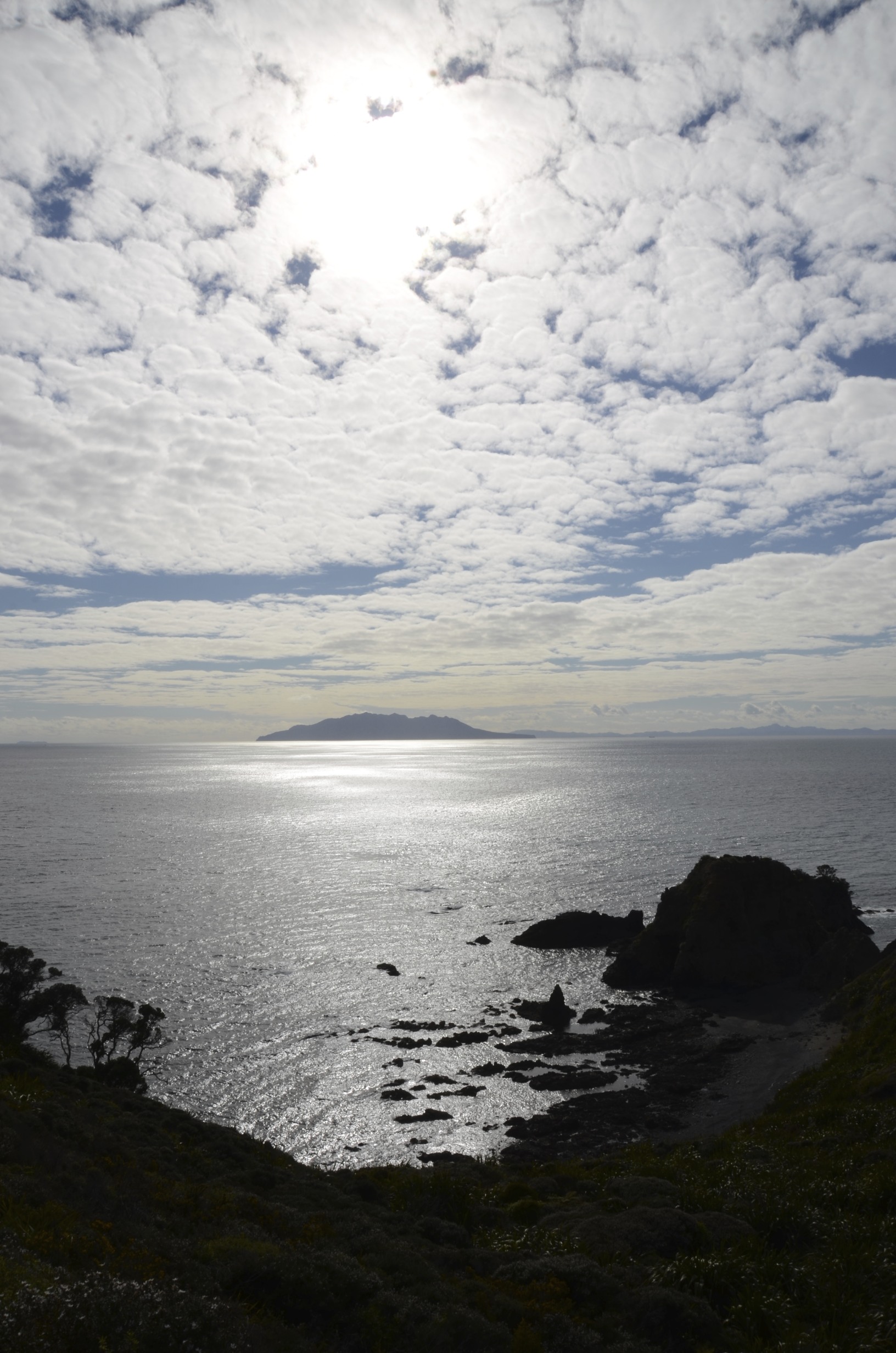 Care was needed at the point as the rock was crumbly and little protection was available.  From the point we returned to the Trig Point and then followed the North Coast Track towards Anchor Bay.  One distressing experience was a fly blown sheep, unable to get onto its feet with blood and facies streaming from its anus.  I don't know if there is some policy against dipping here in New Zealand.  We moved on and I was able to alert the farmer later but I suspect a bullet would have been the most merciful solution.  It was a disharmonious note in a day where spring lambs had been a part of the various delights of the walk.  We now started to see our first humans,  getting up at a more civilised hour they were starting the walk in reverse.  Some gathered around said sheep, increasing its distress but I suppose we all want to help and I suspect their phone call (I did not have my mobile) alerted the farmer I was able to direct a half an hour or so later.

As Anchor Bay came into view a path appeared to lead down to the beach so we took it.  It was an inspired choice as it took us through a delightful green swarded track down to the beach where the path was open with the odd scramble.  Again low light remained and we progressed surely, following the patterns of the repeating tide taking opportunities for pictures as they arose, and they did frequently. 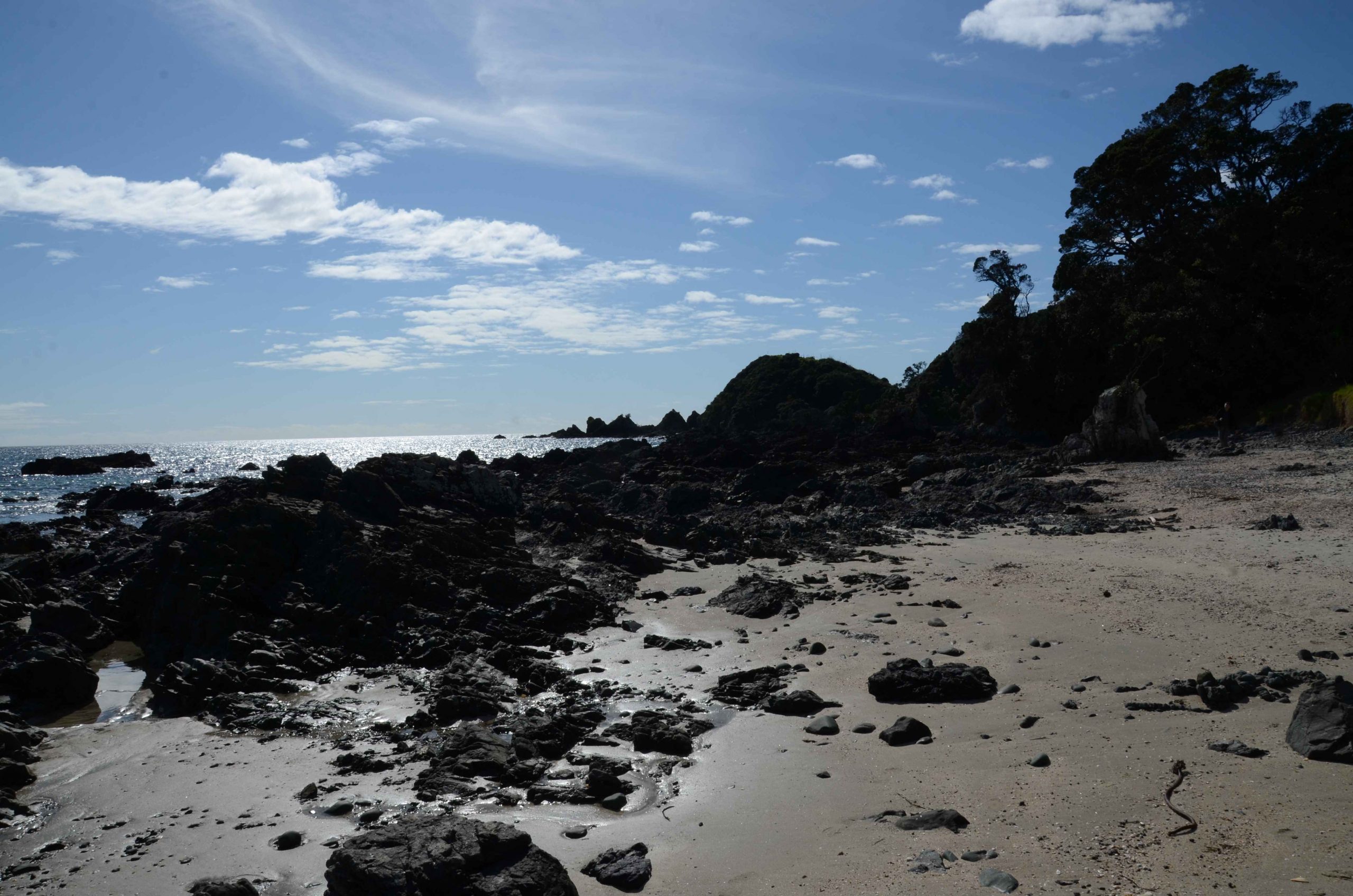 We finally came to the trail head at Anchor Bay which was filling up with dog walkers (yes I know dogs are not allowed, but this is a tribe and they don't need their familiars to be recognised) and picnic parties.  We had the best of day and Michael's wish to rise early was more than vindicated.   By the time we got back to the Lagoon the sun was up and it was not longer magical, simply beautiful.

After that we were hungry, and a short drive took us to the Pottery Cafe and I started by buying spree for the day with a small piece of ceramic art for the wall.  After that it was vine yards.  Brick Bay Wines presented a Pinot Gris to die for, and 15 bottles are now in transit to the UK thanks to a very cheap delivery service from NZwinehome.  After than we found a pinotage at Ascension and I found not resist three bottles.  They recommend the Syrah at the nearby Runner Duck estate and that was to die for, so three more bottles and six specialist bubble wrap containers and the realisation that I would have to buy another bag.  I noticed a pattern here by the way.  Michael was sampling many, buying few.  I had British guilt, its wrong to sample without buying something!

Great day, great country and more to explore on the next visit.

I'm not a huge fan of De Bono but one quote from him is just ...

Regular readers of this blog will know that Cynefin and its domains are going through ...