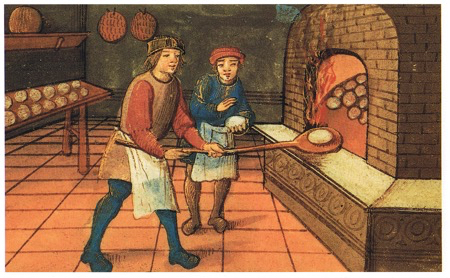 It is no coincidence that I am using images from medieval apprenticeships in this series of posts. The apprentice model remains one of the most effective means of knowledge evolution that the human race has devised. Note I say evolution not capture; knowledge in the apprentice model is not transferred intact, it mutates and changes within a new context. The apprentice copies the master and is generally taught by the senior apprentices or journeymen. Some skills are routine and are taught by repetition to achieve a level of competence in the craft. Those are known, and highly ritualised and their successful acquisition is readily measured. But that is not the only type of transfer that takes place. The apprentice is a part of a community and in process of imperfect copying is shared in stories with other apprentices. Those stories start to blend together with other experiences and as the craft progresses it does not stay static. More than that, minor variations or mistakes sometimes produce innovative, novel results that become a part of the general body of knowledge.

But to innovate you first have to master the craft. A position that is increasingly being argued in aesthetics by the way. Simply saying this is art because I say it is so is less credible than an established master of the craft breaking the rules. Picasso could draw, he did not simply create. Critically the process of acquisition is not just a matter of reading a textbook, it is a co-evolved process between the brain, the body and the tools of the trade. The basic tasks once mastered (a process that is about two years minimum and progressive in nature) do not require conscious thought, in fact thinking about them may make their execution problematic. It is not just the tasks, it is also the understanding of obligation within and to the wider community. Trust is not an isolated decision but a co-evolved process over time and can be more readily lost than won.

One of the IBM idiocies in my latter days with them was the instruction that came down to research to create software that could convert the decisions of senior executives into operational reality without the intervention of middle management. If we leave the basic absurdity of this idea aside for the moment, the larger problem is where is the next generation of senior executives going to come from. Are they going to spontaneously come into being without the learning and wisdom that comes from moving through the ranks, assuming responsibility and learning from mistakes? There is one set of circumstances in which that automation may work. If we reduce work to process, to a series of highly controlled inputs and outputs then it may well be possible but knowledge is greatly diminished in the process. I’m working with one professional service firm at the moment (and talking with another) who have realised that one consequence of this process based dumbing down is that too many of their high-level and high-margin roles can now be replaced by algorithms. It is less that AI has reached a human level of inventiveness, and more that we have decided to meet them halfway by reducing our own intelligence to the level of a computer program.

Of course, much can be automated, but equally much should not be, and can only be at a great loss. Similarly, the move to codification, with the sugar pull of a community of practice, in knowledge management is only likely to produce a downstream loss. Most companies should be grateful that their employees are largely ignored, and ignored the practices of the KM department. So much can be lost, much can be gained we need a diverse strategy to be effective. I’ll move on to the tools and techniques for that in my next post and then conclude by returning to the three types of knowledge I identified yesterday.

One of the hardy annuals used to justify knowledge management programmes is the problem of ...

Having set the scene with a general introduction in my first one and a mild ...