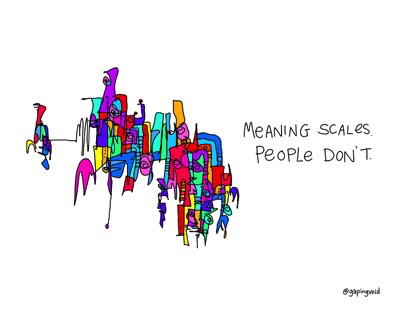 Today’s offering from Gaping Void is wonderfully enigmatic and could be a source for a lengthy trans-disciplinary colloquium if anyone was interested in setting one up. It allows me to return to two recent posts, one on empathy and the other on meaning. Both relate to major international programmes we plan to launch soon from The Cynefin Centre at Bangor University. Both posts generated considerable interest and I am especially grateful to all those who volunteered their time for the citizen engagement project; I should be back to you all early next week with more details.

In essence both those posts relate to the lost of a sense of meaning in society as a whole. Characterised by the anyone but the establishment reactions we are seeing world wide. Brexit, the rise of Trump, student shut down of campuses in South Africa and the failure of the referendum on the Colombian Peace Process being just the start of what is a very dangerous trend, all too reminiscent of the Weimar Republic.

One of the reasons I love the cartoon is that it makes the point that considered as isolating individuals we are nothing but a transient presence in a fragile world. Whatever inspiration we have cannot have any affect unless it is mediated, enhanced and excited through an active, empathetic engagement with the other. Within that phrase the other I am encompassing not only communities, but the physical world in which we live and the abstractions by which we create meaning for ourselves and others. The idea of something which lies beyond our atomistic self is and has always been important to the human species and the growth of scientific understanding has not reduced that need, it has increased it.

The of course we come to the question of scaling which has a different meaning in a complex system from an ordered one. In an ordered system we scale by aggregation, imitation and reputation. We can do that because the system itself is the sum of its parts and the same thing will happen again the same way twice. A complex system in contrast is never the same as the sum of its parts. It may be more, it may be less, but it is always different. Any repetition is accidental and if it repeats (a propensity) represents danger; rather like a stranger in a strange land entered a gambling den and seeing red come up on the roulette wheel repeatedly and assuming that pattern will continue. This is one of the many reasons why I and others argue that the order-complex boundary is a phrase shift not a gradient. Firstly because the mathematics supports that way of thinking but also because humans find it difficult to change their behaviour unless we create boundaries through which they transit.

Scaling in a complex system is fractal, or self similar in nature. In effect we decompose to an optimal level of granularity then allow coupling and recouping of the granules to create new patterns all of which have a self-similar relationship to each other. One of the things we are doing with our adaptation of fitness landscapes within SenseMaker® is to allow the same source data to represent itself for different identity structures within an organisation in contextually appropriate ways. Nothing in a complex system is context free, everything is context specific. By using the same source data we allow the different representations to have an internal coherence that allows an action at one level to combine with actions at another. So the governing body of an organisation can look at a dispositional landscape of its own culture and ask itself, what can we do at board level which will generate more observations like these, fewer like those. Within that same organisation an individual team or a whole division can ask the same question within their own context. As they take action to shift, the acts are coherent to the whole and combine and recombine without the need for central direction and co-ordination. I probably need to expand on that with a series of pictures and illustrations so that might be a good subject for a future webinar and a post or two.

Now for that scaling to work we need the high abstraction of SenseMaker® signification. In a much wider sense my earlier post on meaning referenced this and the role that religion has played in providing an abstract catalyst that allows cohesion between disparate actions by a people who share a common level of abstraction. Deep ethics, those which are understood but not codified, provide that as they act as natural inhibitors on what might otherwise be the gross selfishness of crude neo-darwinianism. As such they enable community level engagement and a sufficient level of coherence to avoid a descent to barbarism. Absent we de-cohere into fragmented echo chambers of deep prejudice and intolerance of anything that is ‘other’. The ‘control’ mechanism that allows coherent actions to ’self-organise’ within a complex system is not explicit and a priori cannot be made explicit; it is a shared abstraction and the relationship between levels of abstraction of degree of coherence it not linear per se, but mediated and governed by shared experience.

The above paragraphs need unpacking, in my own head it represents a major break through in my own thinking but at this point I see as through a glass darkly. In consequence, and it is always so, the greater truth lies in the future. More in future posts and maybe I will organise that colloquium in the near future.

Earlier thoughts on scaling can be found in a series which starts here. I’ve moved on bit since posting these but they are a part of a body of knowledge

I promised in my last post to pick up the question of ethics, and more ...

I don’t know how familiar readers are with Dali’s 1943 painting Geopoliticus Child Watching the ...