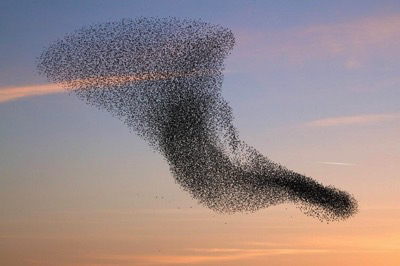 I’ll never forget the first time I saw the murmuration of starlings. I’d arrived at the Hilton in Rome which overlooks St Peters. The family were joining me later for a weekend’s holiday which would include a Welsh defeat of the Italians in the Six Nations. It was the early evening and I went out onto the balcony and watched it for the next hour or so with a sense of awe. That feeling of reverence, a sense of the other is a key aspect of human experience and we plan a Cynefin Centre public good project on this which will start shortly. We are looking to understand through narrative those experiences of something greater than our individual compass that is a part of the human experience. Without awe we are reduced to a tired chattering collection of utilitarian needs with little meaning or purpose. Meaning making experiences may be religious, but they can come in a moment of ecstasy, a walk along the beach in a storm, a sunset from a ridge in Snowdonia or whatever. Our ability to see beyond ourselves in a wider physical setting is part and parcel of human identity.

The change in the behavioral state of one animal affects and is affected by that of all other animals in the group, no matter how large the group is. Scale-free correlations provide each animal with an effective perception range much larger than the direct inter-individual interaction range, thus enhancing global response to perturbations.”

Interestingly the actions of each bird in the flock only effects its seven closest neighbours. Seven is one of those numbers, like three, which have magical significance. It turns out that “Interacting with six or seven neighbors optimizes the balance between group cohesiveness and individual effort”. Now this optimisation is critical and its nature is both co-evolutionary and exaptive in nature. It has profound implications for organisational design when we are responding to complex situations. I recently wrote a post on Freedom through constraints which represents a first stage thinking on some key changes to the Cynefin framework. That post talked about the nature of the coupling constraints in a complex system where there are no containing constraints. Murmuration demonstrates the way in which a coherent pattern can emerge through small numbers of interaction that (as the above quote states) provide a large perception range which is effective beyond that of which the individual is directly aware.

In human complex systems we have to factor in other aspects which do not apply for starlings. Those include, but are not limited to, the following:

The importance of those 3 ‘I’s to anthro-complexity cannot be underestimated. Abstraction based language, the ability to engage not react is a key part of the human condition. The question is not to argue some blind determinism, but instead to think of when we can direct those patterns for the wider good. Also the degree to which we can habituate action to achieve those goals. That is a theme, along with organisational design, that I will pick up in a series of posts this week.

A long time ago I settling into a new strategic role within DataScience following the ...

a need for empathy

There was a wonderful, if depressing, tweet from J.K.Rowling yesterday: If we all hit ctrl-alt-del ...