Nancy Dixon, in response to my keynote yesterday, expressed a preference for getting people together to talk about things rather than gathering narrative into a database which “spits out the patterns”.   She argued that Appreciate Inquiry and Future Search, both workshop focused, were techniques able to deal with multiple ontologies.

The same preference was clear in David Gurteen's slides for his talk today.  There was a picture of excited happy people in a knowledge cafe, followed by one of people slumped in boredom or asleep in a lecture theatre.  I suspect he was trying to argue for the former over the latter.  Now I've seen as many people going through the motions in a workshop as I have asleep in a lecture.  I've also seen people animated and excited in a lecture (both as receiver and giver).  There isn't one right way I'm afraid, its a little more subtle than a crude dichotomy.

Now regular readers will know I don't like either/or positions in most cases, preferring a both/and approach.  Cynefin is all about that, it doesn't reject process based approaches, it legitimises them within boundaries. Context is king, but I will return to that tomorrow, picking up another of Nancy's comments.

So I don't oppose conversation, far from it.  A large number of our methods include large group facilitation as well as a host of facilitation techniques including the ever popular ritual dissent.  Anyone coming on our old introductory and advanced courses will know that; those coming on the new Cynefin & Sense-making programme will have more if anything. That said all of those techniques focus on increasing scanning, forcing diversity and contrast into the conversation.  Fundamentally letting people be comfortable leads to complacency and premature consensus. 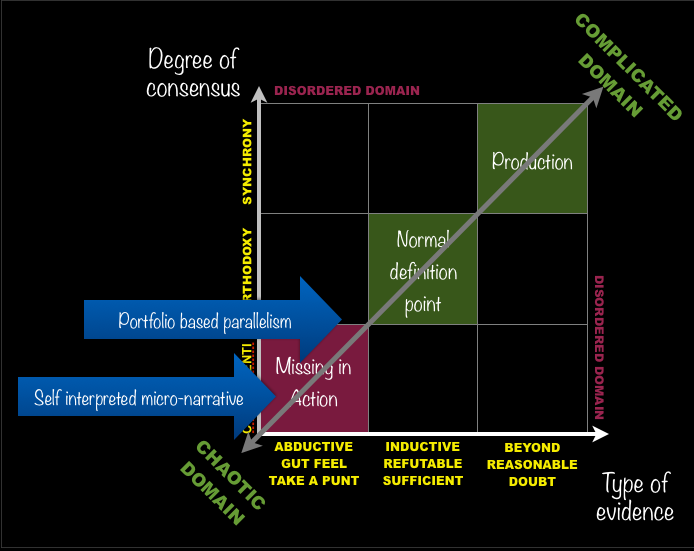 Now in the keynote I had been arguing that most knowledge management programmes start in the central box of the complex domain model.  My keynote in terms of action had argued for two pre-processes:

It's a variation of the version I presented last week in Kraków in the context of SCRUM/AGILE.  Now both of those techniques are about increasing diversity, avoiding pattern entrainment, increasing scanning range.

A point I made in the discussion that followed was to repeat a point I had made in the keynote namely humans at the start, humans at the end.  That was a reference to the fact that in SenseMaker® humans do the primary interpretation of the micro-narrative, but also the secondary interpretation exploring patterns in the resulting database which as far as I know is not an expectorant!  The main contrasts with the process of starting with a conversation are:

Now once you have then, the conversation and large group techniques come into play, including our workshop based approach to designing safe-to-fail experiments.  With a narrative database ideas that arise in the conversation can be tested for coherence against the database, bringing a broader population into play.  Nancy mentioned one of the claims of Future Search namely that it achieves the “whole system in the room”.  Now that I would dispute that, what you have is a group of people who are a part of the system and become normed through the group process.  Add in the micro-narrative and you get a lot closer, but only if you continue the capture ensuring fast feed back loops between and within the system.

KM Europe and a respondent

A flying visit to Amsterdam (well train in from Nice then a flight home) to ...