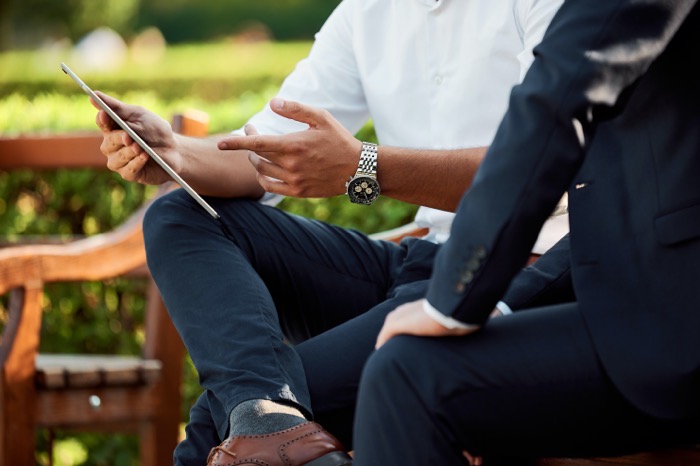 May years ago now I left a job as Development Accountant at one of the Hunting Group Companies to enter the field of Decision Support Consultancy at a company called Datasolve, which became DataSciences and which was then bought by IBM.  I’d never been a consultant and never imagined myself as a salesperson.  After charity work and a slightly traumatic period running student services at a University, I had shifted into Industry initially in personal and training but then in Accounting.  I’d actually got a qualification from the Certified Accountancy body and was responsible for business computing strategy in the company (just to be clear this meant rolling out IBM PCs and spending two days training people in Vizicalc so not glamorous).   I was in my twenties and naive in the ways of Industry.  I genuinely thought the role of HR was to look after the staff, so when a new Finance Director was appointed and started to shake things up we had a lot of complaints and so I barged into his office to admonish him for his many and various sins.  I think I lasted around three minutes, two of which were shock on his part, and slunk back to the Personnel Department to lick my wounds.  The next day I was summoned to my boss to find him and the FD sat on the other side of the desk and I was given an ultimatum.  I could either be fired for insubordination or go and work for the FD as his de facto deputy.  He was looking to computerise accounts and he was curious about someone prepared to risk his wrath so he had investigated a bit and did a deal with the HR Director.  Needless to say, I said yes and had a lot of fun over the next few years.

One advantage of working in Finance is that you know when things are going wrong so Bob left and offered me a job in his new organisation.  Now I could have followed him through increasingly senior roles but I decided it was time to strike out on my own.  At that time people with accountancy qualifications and computer schools were few and far between so it wasn’t difficult.  Decision support fascinated me anyway and I was partway through an MBA in Financial Management so I thought I could write my thesis around the job – something I did while managing our offerings to companies such as Guinness and Union International; all working at board level.  So this was all good, OK I had a two-hour commute across London but we would move eventually and it all looked exciting.  So imagine my shock when the first course I went on was on how to sell double glazing, run in a gothic hotel on the River Thames where they had filmed the Belles of St Trinian’s back in the year of my birth.  To be honest I was a little insulted but it was a new job and you accept things so I got involved and it was the single best course I have ever done, and the learning has stayed with me ever since.  We learned and practiced cold calling, the assumptive close, watching for buying signals, not buggering up the close with new information, and so on.  We would never sell double glazing, and we knew it, but the learning applied in all fields.  We worked out the links to our consultancy for ourselves. And, building on work using actors as proxies when I looked after training in Hunting Surveys & Consultancy, I was starting to realise the value and ethics of indirect approaches to learning.

Later in the DataScience Genus programme I learned about, and developed a whole new theory of life cycle marketing and adapted that into a comprehensive sales training programme. 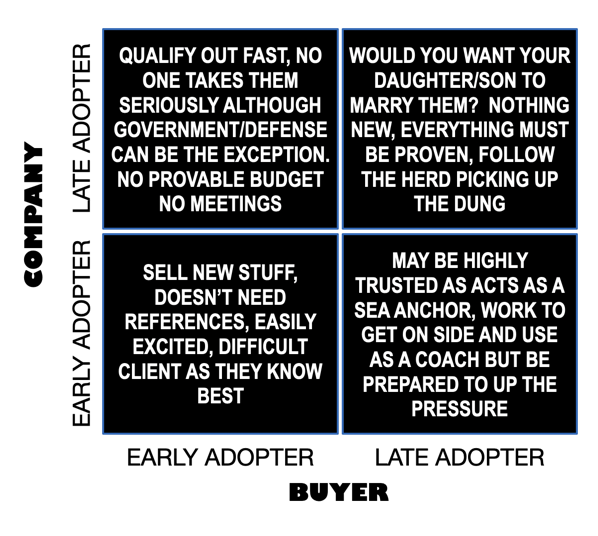 A key part of that was the matrix shown which is, I hope largely self-evident.  It trained people to understand the context from both sides.  I’m working on getting all of that material back into a more up to date structure both for our own staff and as a wider offer to the network. Cognitive Edge handles new and novel things and there is a special art to that type of selling.  It’s something I am looking forward to teaching and I was very lucky to go through that training.  If I haven’t I could never have got any of the Cynefin work started as to do so I had to sell ideas that were completely left field to conservative buyers.  it is easier now but selling is a skill that any innovator needs to learn.

Now there are some principles that we can apply here which I will outline in part.  But whatever I’d recommend anyone setting up as a consultant for themselves or a company to go through the same training I did.  So what is key?

Now I plan to write a lot more on this in the future but for the moment I want to apply the above to a question that came in from  Steven Walden via LinkedIn who I have worked with on and off over the years looking at how to make sense of customer experience.  I asked if he minded me answering it here on the blog and I got permission.  So let’s start with what he said:

Dave. Let’s be honest.  When I am faced with a C-suite executive who wants something to report to the board on customer experience (who have never heard of Cynefin but want one number they can measure on a linear scale with associated targets). What should I say? I totally get the theory – although still have a lot of questions about the interaction between ‘categories’ (note the inverted commas). I just want a practical response.

C-Suite: ‘we want to measure customer experience and see the result. Let’s use NPS set targets and go from there

Me: ‘Tell me what the customer experience is and I’ll tell you what to measure.’

C-Suite: ‘NPS is the way let’s benchmark and go from there

Me: ‘In part you are correct, but in a very significant way this is just gamed and gifted information that omits how we can evolve from where we are, and prevents us seeing the opportunity’

C-Suite: ‘No idea what your talking about. Let’s use NPS, it gives us benchmarks, we can measure it, bla bla bla.’

Me: ‘Focus on doing something then measure it, define where you are first. More stories like this fewer stories like that as a parameter metric might help you’

C-Suite: ‘give an example’

So let me try an alternative approach

Now there is more I can write, but that is the essence for now.  Selling services and novelty is a complex dance of discovery in which you have to co-evolve capability and need with the client through multiple conversations.

Banner picture of the light on the sea  by Jeremy Bishop, opening picture of a business meeting by Medienstürmer both on Unsplash

Today’s post is a development of yesterday’s and I plan to look at the various ...

So it's the end of a long day and I am getting irritated listing to ...