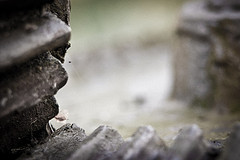 After the cathartic moments last night we moved on this morning spending forty minutes discussing if we should spend and hour in the theory integration side.   My view was that I had put up with several hours of discussing idealised futures yesterday so it was not unreasonable to spend some time on the theory side.  Fortunately most were happy with doing that.  Just to be clear “put up with” does not mean I didn’t enjoy it, such discussions are entertaining and agreeing common enemies has a unifying result.  I just think such discussions are an indulgence as they produce little or nothing as a result other than making the participants feel good about themselves.

So we started to discuss different models and ways of looking at things.   I put up the input/out model I developed (and published with Peter Stanbridge) that splits computational from cognitive complexity and positions both against process management and “systems thinking”.   I acknowledged that the label was still problematic for me as it covers so many things.  That brought Gerald Midgley (who I have known off and on for several years now) into play.  He put up a model that he (I think) had developed some years ago and which was extended by Michael Jackson. 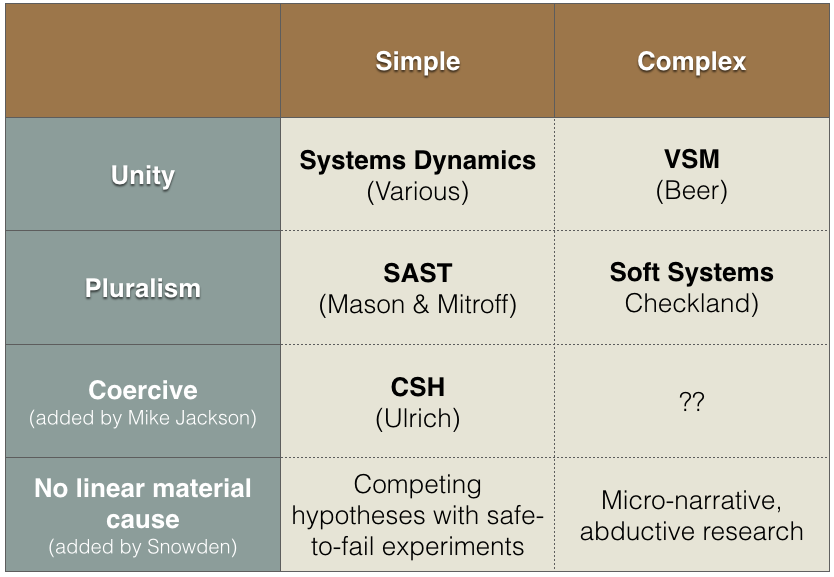 As you can see it separates simple from complex (in the common language sense not as in CAS) and then tries to map methods.  The third row was from Michael Jackson who I met once when I gave a lecture at Hull who was (as I remember it) not happy with my arguing that complex adaptive systems thinking was very different from his systems appraoch.  He couldn’t remember what should go in one box so all ideas are welcome!

Now this was all interesting so I added another row and we moved around and about that for a bit before moving into describing practice.  A little difficult as I was not just applying consultancy and workshop techniques, but also had SenseMaker® to bring into play which was unfamiliar to most so lots of conversations.  More to follow on from this so I will report in the future.

Either way I thought I would put the model up.  I would really like to get definitions in place here so more contributions welcome.

An odd sort of day today, the first of two in a small session discussing ...