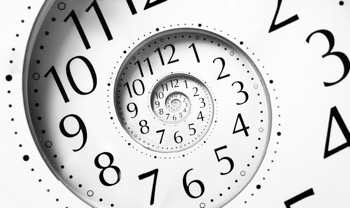 I’ve been thinking and reading about time recently and not for morbid reasons. Some of that thinking is practical in that I simply don’t have enough of it to complete the work I have to do, and that which I want to do; overlapping sets that are further apart than I would like at the moment. The main reason however is part of work I am doing on the next generation of SenseMaker® where time and perception of time will be a key component. To be clear, what follows is not a design statement! It is me starting to think about a subject and what it means for sense-making in organisations and wider society. I have a body of reading to complete both personally and through volunteers. I’ve long known the power of giving people books as presents when you know (i) the recipient will understand the material better than you and (ii) you have too many books to read. So some of the neuroscience and anthropology has been outsourced either formally or covertly over the last year.

The issue is going to be shifting that theoretical understanding into a form that can work in terms of methods and software. The triads in SenseMaker® for example are really simple to use, more complex to design, but deeply rooted in a wide body of theory. The secret of the approach to research I have been talking about in this blog since before Christmas is to be based in sound theory, but to be both elegant and simple to use in practice. I was always taught in the days when Maths and Physics was a large part of my life (many many moons ago) that elegance is one test that you are going in the right direction, and simplicity that you have arrived there. I would say the same should be true of philosophy by the way but I will come back to that in a future post.

I’m interested in other people’s thoughts on this and I will be starting some experiments on live projects soon – I may also include some of the early material in the coming set of Cognitive Edge courses for those interested. I’m already having some thoughts on a second generation version of Future Backwards that would take the whole side-casting agenda forwards.

PS: if you follow some of the links to historical blogs you will find that there are missing pictures on a lot of them. I will be correcting that but it is a manual task so I’m going to do a month at a time over the weekends this month. That also means I can grab material and put it into Scrivener which is now set up with the basic book structure. Apologies if it not obvious in the short term, but the old web site is still available. If anyone wants access to material there let me know.

An article in the Washington Post caught my attention at the end of last year. ...

One of the insights which can come with age/experience is that the vast majority of ...