Day two of the ETHOS event and we are starting to focus on applications both for customers but also to measure value internally.   The triad that opens this post is a neat way of showing the balance of capabilities that any consultancy group needs to maintain.  All three capabilities, namely selling, delivery and creativity are needed the problem is getting the balance right and measuring what happens.   In most consultancy groups the reward normally does to those who sell as it is the most tangible of all three.  Most consultancy groups respect delivery but generally in the same sense as officers in the 19th Century regarded NCOs in the Army, necessary for execution but you don’t invite them to mess with you.  In effect the green area is desirable and over focus on any red extreme problematic.

Now any organisation needs all three characteristics and none is more valuable than the others, but the balance of need will change over time and in different contexts.  So if projects go wrong people tend to focus on delivery and blame sales for selling beyond capability.  If income drops then whatever and whoever sells is going to be lauded.   Interesting both the top and bottom rightof the triad tend to be known and form a type of duel point attractor (moving between two near stable states).  The bottom left is more problematic and not often well respected.  There is a consultancy mindset which is very linear and tends to two options:

Regrettably with the growth of manufacturing models of consultancy and the attempt to create processes that “allow” shifting resource to lower cost economies (one of the IBM problems carrying forward from yesterday) the latter is becoming more common.  It started with BPR/ERP driven approaches and the recipes continue to this day with NPS and the like. 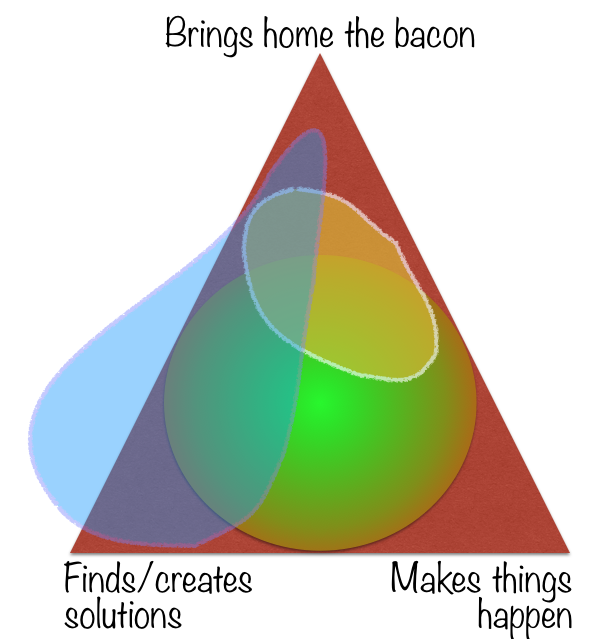 Both tend to neglect the third which is problematic as that capability can co-evolve capabilities and needs to create something more sustainable and resilient.   The problem is that people able to do this are problematic in themselves.   In my second picture here the orange area represents a typical partner profile, able to sell and can execute if needed.  The blue is the typical innovator who engages and is not prepared to be locked up in a box.  The problem with these people (from the sales perspective) is that they live outside the triangle and overlap with the sales orientated partners in a disruptive way.  There is nothing the account focused partners likes less than a researcher or consultant who builds a relationship with a client which they cannot directly control.

I had this a few times in IBM when I had relationships at very senior levels in government in both Singapore and US.   Some people in IBM got the value of that, but there was regular strife with people who felt that a linear process which they controlled had been undermined.   I remember once getting blamed for being respected in senior DARPA circles as that was not my place.

Now one should not draw universal conclusions from personal experience, but I have heard similar things from others.   If we use this triad for continuous reporting of project and other activity within an extended consultancy network it will be interesting to see if it makes the interdependencies visible in a way that means each will tolerate the eccentricities of the other.  Having occupied all three extremes at various stages of my career, including the general management role that requires integration of all three, I have some appreciation of the complexities.   What I can now see how to do is to measure the interdependency and translate it into a value measure.   I think we can also use this in recruitment, but that, alone with other patters on the triad is for another day.

An interesting day working with a group of Partners from ETHOS with whom we are starting to ...

For those not familiar with the term it describes the various changes that take place ...